In this April 1, 2020 file photo, a woman stands in front of a Buddha statue while visiting the Kotoku-in Temple in Kamakura, Japan, near Tokyo. The powerful forces of secularization and population decline have caused the religion to steadily wane in Japanese society, with disinterest in Buddhism — and faith in general — particularly pronounced among the young. Photo: Koji Sasahara/AP
Share this:

EDITORS’ NOTE: Spirituality and nontraditional religion are growing among young people. Secular rituals, like Sunday gatherings “without God,” for example, are a secular supplement for Christianity’s normal chapel and church services. Whether the retreat inward toward new-age spirituality, combined with political motives and associations, is an abandonment of civic life or simply young people’s exercise of their religious energy is subjective. Yet, regardless of secularization, religious association and heritage will always be a self-identifier for some Americans. Brooklyn’s various religious groups and institutions have ingrained themselves into local life, creating neighborhoods and communities and simultaneously showing that political, spiritual and associational relationships are distinct from one another. How they interact is what academics, journalists and religious leaders observe and document. Brooklyn is a conglomerate of these relationships among the borough population, constantly changing and evolving.

As the United States gets less religious, is it also getting more selfish?

Historically, religious Americans have been civically engaged. Through churches and other faith-based organizations, congregants volunteer, engage in local and national civic organizations and pursue political goals.

Today – the rise of a politically potent religious right over the past 50 years notwithstanding – fewer Americans identify with formal religions. Gallup found that 47 percent of Americans reported church membership in 2020, down from 70 percent in the 1990s; nearly a quarter of Americans have no religious affiliation.

Meanwhile, other kinds of meaningful practice are on the rise, from meditation and yoga to new secular rituals like Sunday assemblies “without God.” Between 2012 and 2017, the percentage of American adults who meditated rose from 4.1 percent to 14.2 percent, according to a 2018 CDC report. The number of those who practiced yoga jumped from 9.5 percent to 14.3 percent. Not everyone considers these practices “spiritual,” but many do pursue them as an alternative to religious engagement.

Some critics question whether this new focus on mindfulness and self-care is making Americans more self-centered. They suggest religiously disengaged Americans are channeling their energies into themselves and their careers rather than into civic pursuits that may benefit the public.

As sociologists who study religion and public life, we wanted to answer that question. We used survey data to compare how these two groups of spiritual and religious Americans vote, volunteer and otherwise get involved in their communities.

Our research began with the assumption that moving from organized religious practices to spiritual practices could have one of two effects on greater American society.

Spiritual practice could lead people to focus on more selfish or self-interested pursuits, such as their own personal development and career progress, to the detriment of U.S. society and democracy.

This is the argument sociologist Carolyn Chen pursues in her new book “Work, Pray, Code,” about how meditators in Silicon Valley are re-imagining Buddhist practices as productivity tools. As one employee described a company mindfulness program, it helped her “self-manage” and “not get triggered.” While these skills made her happier and gave her “the clarity to handle the complex problems of the company,” Chen shows how they also teach employees to put work first, sacrificing other kinds of social connection.

Bringing spiritual practice into the office may give workers deeper purpose and meaning, but Chen says it can have some unintended consequences.

When workplaces fulfill workers’ most personal needs – providing not only meals and laundry but also recreational activities, spiritual coaches and mindfulness sessions – skilled workers end up spending most of their time at work. They invest in their company’s social capital rather than building ties with their neighbors, religious congregations and other civic groups. They are less likely to frequent local businesses.

Chen suggests that this disinvestment in community can ultimately lead to cuts in public services and weaken democracy.

Alternatively, our research posited, spiritual practices may serve as a substitute for religion. This explanation may hold especially true among Americans disaffected by the rightward lurch that now divides many congregations, exacerbating cultural fissures around race, gender and sexual orientation.

“They loved to tell me my sexuality doesn’t define me,” one 25-year-old former evangelical, Christian Ethan Stalker, told the Religion News Service in 2021 in describing his former church. “But they shoved a handful of verses down my throat that completely sexualize me as a gay person and … dismissed who I am as a complex human being. That was a huge problem for me.”

Engaged on all fronts

To answer our research question about spirituality and civic engagement, we used a new nationally representative survey of Americans studied in 2020.

We examined the political behaviors of people who engaged in activities such as yoga, meditation, making art, walking in nature, praying and attending religious services. The political activities we measured included voting, volunteering, contacting representatives, protesting and donating to political campaigns.

Our new study, published in the journal American Sociological Review, finds that spiritual practitioners are just as likely to engage in political activities as the religious.

In other words, we found heightened political engagement among both the religious and spiritual, compared with other people.

Our findings bolster similar conclusions made recently by sociologist Brian Steensland and his colleagues in another study on spiritual people and civic involvement.

Uncovering the spiritual as a political force

The spiritual practitioners we identified seemed particularly likely to be disaffected by the rightward turn in some congregations in recent years. On average, Democrats, women and people who identified as lesbian, gay and bisexual reported more frequent spiritual practices.

We suspect these groups are engaging in American politics in innovative ways, such as through online groups and retreats that re-imagine spiritual community and democratic engagement.

In his influential book “Bowling Alone,” Harvard political scientist Robert Putnam suggests American religious disaffiliation is part of a larger trend of overall civic decline. Americans have been disengaging for decades from all kinds of civic groups, from bowling leagues and unions to parent-teacher organizations.

Our study gives good reason to reassess what being an “engaged citizen” means in the 21st century. People may change what they do on a Sunday morning but checking out of church doesn’t necessarily imply checking out of the political process. 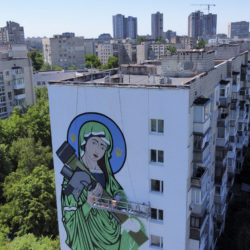 The patriotic Virgin: How Mary’s been marshaled for religious nationalism and military campaigns