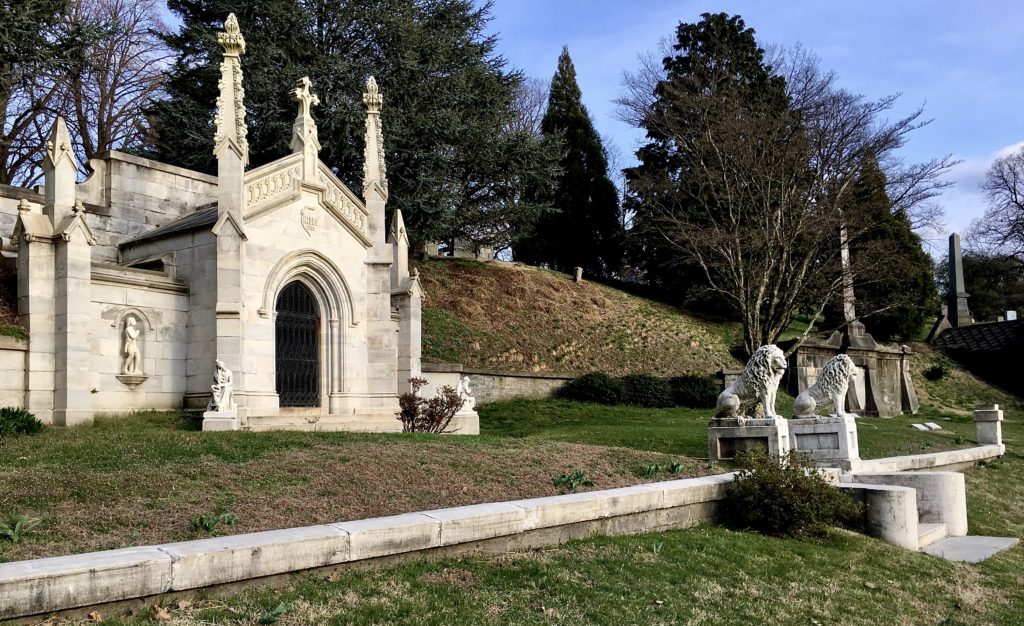 Its 478 acres of wide-open space are an alternative to crowded parks. It is full of winding roads and walking paths with lots of room to maintain social distancing from other visitors.

And those hills! They’ll help you hit your target heart rate in no time flat. (That’s about 50 to 70 percent of maximum heart rate during moderate-intensity exercise, the American Heart Association says.)

Green-Wood Cemetery is keeping its main entrance at Fifth Avenue and 25th Street in Greenwood Heights open every day from 8 a.m. to 7 p.m. — which is later than normal for March.

“We recognize the role Green-Wood plays in so many lives, not just as a place of remembrance, but one of solace in an ever-uncertain world,” a COVID-19 update from Green-Wood Cemetery President Richard J. Moylan says on the graveyard’s website.

“Therefore we are dedicated to stay open and accessible during this time so you may continue to find peace in our landscape — as generations before us have,” Moylan’s message says.

As a bonus, the graveyard’s magnolia trees are in bloom now. Their floral beauty will cheer you up.

I got an eyeful of them on Sunday, when I walked from my Bay Ridge apartment to the cemetery. To comply with New York’s coronavirus lockdown, I am staying away from subways and buses as much as possible to leave room on them for people who absolutely need them.

Crowding has been a problem in some Brooklyn parks during the lockdown, which mandates solitary outdoor exercise. Gov. Andrew Cuomo called people who are disobeying social-distancing rules of staying at least six feet away from each other in parks “insensitive, arrogant, disrespectful and it has to stop now,” the Brooklyn Eagle reported on Sunday.

When you take your walks in Green-Wood Cemetery, you really should climb up Battle Hill — because it’s the highest natural elevation in the entire borough of Brooklyn.

Its name comes from the fact that a key fight during the Revolutionary War took place on it on Aug. 27, 1776, during the Battle of Brooklyn.

To commemorate this battle, a wealthy ink manufacturer named Charles Higgins bought the land in front of his own tomb and donated it as a site for a statue of Minerva. The bronze statue of the Roman goddess of wisdom and war, who stands at the Altar of Liberty, was unveiled in 1920.

Minerva raises her left hand in a salute to the Statue of Liberty, which is visible from Battle Hill. Minerva’s gesture mirrors Lady Liberty’s raising of her torch.

Frederick Wellington Ruckstull is the sculptor who designed the Minerva statue.

A pioneering protector of animals

There’s a lot of history at Green-Wood Cemetery, which was founded in 1838. About 560,000 people are buried there.

Famous folk who are interred include composer Leonard Bernstein and stained-glass great Louis Comfort Tiffany. Artist Jean-Michel Basquiat’s grave is there, too.

One famous person’s grave I passed on my Sunday stroll was that of Henry Bergh, who gave up his career as a diplomat to devote his life to protecting animals. He founded the American Society for the Prevention of Cruelty to Animals in 1866.

The concept of institutionalizing kindness to animals was revolutionary in that era, when carriage and wagon horses were treated as beasts of burden and dog fighting was a form of entertainment.

In front of Bergh’s tomb, there’s a bas-relief sculpture lying in the grass called “Humility of Man Before a Group of Ageless Animals.” The artists were Wilhelm Hunt Diederich and John Terken.

BTW, the ASPCA’s borough headquarters and “ambulance house,” as it was called, is at 233 Butler St. in Gowanus. It was designated as a city landmark last year.

While we’re on the subject of loving care for animals, I should mention that not far from Bergh’s mausoleum, there’s a grave marker for a dog named Laddie, with a sculpted image of a big, fluffy canine. It stands beside an obelisk memorializing Brewster Valentine, who died in 1878, and his wife Ann Eliza, who died in 1871.

The Bonanza King and the theatrical wizard

Another beautiful mausoleum I spotted on Sunday was that of John W. Mackay. It’s close to the cemetery’s Prospect Park West entrance.

It’s got an angel sculpture standing over its front door, and other sculptures perched elsewhere to keep it company. This tomb is two stories tall, and a stone cross on top of it further adds to its height.

Mackay was an Irish immigrant who was raised in Manhattan’s notorious Five Points slum. He catapulted to wealth by winning control of the Comstock Lode gold and silver deposits in Nevada.

He was one of the richest people in the world at the time of his death in 1902, Gregory Crouch wrote in a 2018 Smithsonian Magazine story. A book Crouch wrote about the rags-to-riches industrialist is titled “The Bonanza King.”

Nearby, another wonderful mausoleum is the final resting place of Imre Kiralfy, who was born in Budapest in 1845. He was a producer of theatrical extravaganzas whose shows wowed America for a quarter-century.

He and his brother Bolossy Kiralfy produced a revival of a wildly successful show called the “The Black Crook” in 1873 at Niblo’s Garden in Manhattan. Many theater historians consider the show to be the first Broadway musical.

The owner of Niblo’s Garden is also buried at Green-Wood.

He was William Niblo.

The sight of his gleaming white stone mausoleum, which stands on the edge of a pond called Crescent Water, may make you feel wistful now that parties have been outlawed because of COVID-19. This 19th-century New Yorker loved a good party so much that he frequently hosted festivities right here in his tomb — while he was still alive.

If you stand on the far shore of Crescent Water, you can see his mausoleum’s reflection in the water. A pair of majestic lions guards the walkway that leads up to the tomb, which is nestled in a hillside.

Niblo’s Garden was an open-air saloon and an indoor theater with 3,200 seats. It was on the corner of Broadway and Prince Street in what is now SoHo. It burned down twice and was rebuilt.

Niblo died in 1878. His New York Times obituary published that year says he “was an Irishman by birth, and was possessed of those qualities that win friends and cement friendship. He was jovial, kind-hearted and generous almost to a fault.”

For several years, Green-Wood Cemetery has hosted an annual event outside his mausoleum, with fire-eaters, contortionists and musicians offering the type of entertainment that was typical at Niblo’s Garden.

The mayor of Rome

During my stroll, I saw one of Green-Wood Cemetery’s most beautiful statues. She’s a bronze angel with upraised arms and swirling robes who stands atop a monument for the Valentine family.

The statue underwent a restoration to deal with metal corrosion that was paid for by the Green-Wood Historic Fund’s “Saved in Time” program.

The creator of the bronze angel was a sculptor of note, Italian-born Adolfo Apolloni, who lived and worked in Boston and Providence, Rhode Island.

Later, he returned to his home country and became the mayor of Rome. An art institute in the town of Fano, Italy is named for him.

There were so many flowering trees to be seen at the cemetery. They brightened gravesites and brought cheerful spring beauty to this awful moment when New York is the epicenter of the coronavirus outbreak in the United States.

Green-Wood Cemetery has more than 7,000 trees and is a Level III Arboretum. This special classification means it has more than 500 types of woody plants, employs a curator of its tree collections, does research and conservation and collaborates with other arboreta.

Some of Green-Wood’s trees have probably been alive longer than the cemetery has been in existence.

In a few weeks, Green-Wood’s cherry trees will blossom. I photographed them last year. They’re quite a sight.

On your way out of the cemetery, you will pass through the arches of Gothic Revival-style gates that were designed by architecture firm Richard M. Upjohn & Son.

Their construction was completed in 1865. They were designated as an individual city landmark in 1966.

The gates are topped with spiky spires. The tallest one is draped with nesting materials — which are the home of a flock of monk parrots.

The often-repeated story about the parrots is that they first appeared at the cemetery in the 1960s after escaping from a shipment of birds that passed through Kennedy Airport.

On Sunday, I didn’t actually see the parrots within the cemetery’s precincts. But a bit earlier in the afternoon, when I was walking up Sixth Avenue a block away from the graveyard, several parrots flew past me.