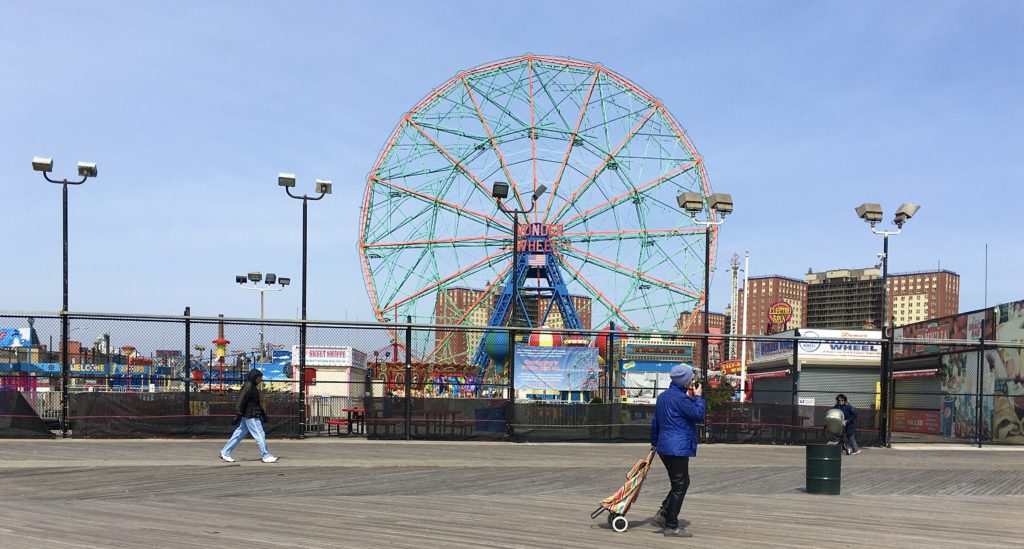 Coney Island’s fabled Wonder Wheel will not open for the season on April 4 or hold its traditional Palm Sunday Blessing of the Rides ceremony on April 5 because of the novel coronavirus pandemic.

“Of course safety and the health of all our employees and family members and of course our customers are the utmost priority,” Wonder Wheel co-owner Dennis Vourderis told the Brooklyn Eagle. “Common sense dictates that we are going to be closed until the time is appropriate for us to open. When our elected officials advise us that it’s safe to open, then we will open.”

He added, “There’s people sick and there’s people dying, and we all have to do our part. There’s no exception.”

His family has been working hard to prepare the Wonder Wheel for the upcoming season. This is the 100th anniversary of the beloved 150-foot-tall Ferris wheel, which is a city-designated landmark.

“We will be celebrating when it’s appropriate to be celebrating. Right now is not a time to be having celebratory events,” Vourderis said.

When the coronavirus outbreak hit New York, the Vourderis family realized there was trouble ahead.

“The family saw the writing on the wall when all this unfolded. We knew in the back of our heads that opening day was in jeopardy,” he said.

He’s looking forward to a moment in the future when they can throw a “post-pandemic party” to celebrate the Wonder Wheel’s anniversary, he said.

Family members work year-round at the Wonder Wheel complex, which also has other adult rides and kiddie rides. “We’re family, so we can hold off on getting paid for a while,” Vourderis said.

That said, he hopes the family gets rent deferral or rent forgiveness from the city Economic Development Corp. — which owns a portion of the property where the Wonder Wheel is located.

“To emphasize, our season is short enough as it is,” he said. “Don’t forget we’re not open year-round.” Coney Island amusement parks are open from April through October.

“Time is of the essence for us,” he said. “So hopefully there’ll be some financial assistance from our elected officials and the administration.”

The Wonder Wheel was manufactured by the Eccentric Ferris Wheel Amusement Company. Greek immigrant Denos Vourderis, who famously told his wife Lula that one day he would buy her the Wonder Wheel as a wedding present, purchased the ride in 1983.

The family worked hard to repair the famous ride after Coney Island was devastated by Superstorm Sandy.

The other big amusement park operator, Zamperla, had nothing to say about the postponement of Coney Island’s opening weekend. It operates the landmarked Cyclone roller coaster.

“As soon as we have some more details, I will pass them right along to you,” a Zamperla spokesperson told the Eagle via email.