I rode Coney Island’s Wonder Wheel in the fog 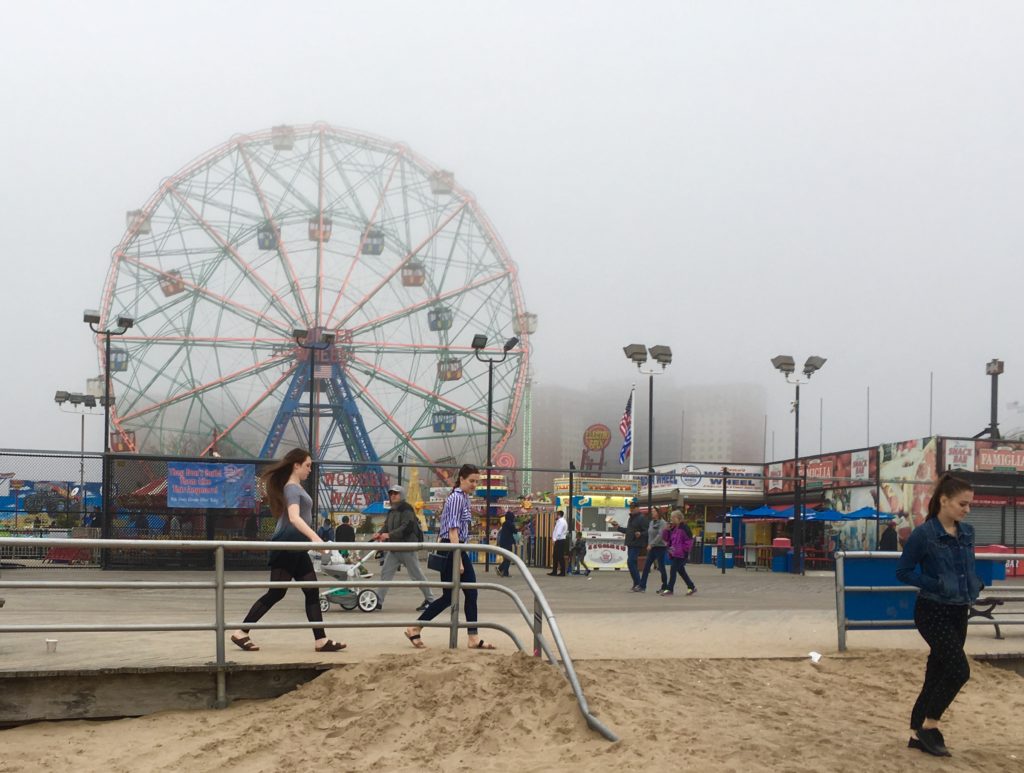 The fog lends an air of mystery to Coney Island’s Wonder Wheel. Eagle photo by Lore Croghan
Share this:

The Wonder Wheel is magic. It cured my fear of heights, at least for a few minutes.

The fog had a lot to do with it.

Coney Island was wrapped in a big, wet cloak of San Francisco-style fog on Sunday.

The mist rolled in on a red-letter day for fans of Brooklyn’s seaside playground: Palm Sunday, the start of the Christian calendar’s Holy Week.

Luna Park had a “soft opening” on April 6 to raise money for a Brooklyn nonprofit called Children of Promise, NYC. As a matter of tradition, though, Sunday was Coney Island’s big day.

Just once before in my looong life did I muster the nerve to ride Coney Island’s landmarked Ferris wheel. That was on a sunny day in 2017, when I decided that seeing the famous shoreline’s epic scenery from the top of the 150-foot-tall Wonder Wheel was a bucket-list thing.

The experience was memorable. But I had absolutely no intention of repeating it. It was too anxiety-inducing.

I changed my mind on Sunday, though, because of the wild and woolly fog.

It made everything look so different when I was strolling along the Coney Island Boardwalk. What would things look like from way up high on the Wonder Wheel? There was only one way to find out.

I chose a stationary car for my trip.

Yes, fellow wimps, some cars on the century-old ride swing back and forth as the wheel turns and some don’t. There are separate lines to stand in so you won’t wind up on a swinging car if it’s more than you can handle.

When I got into my scaredy-cat car and wheeled up into the misty air, the first thing I eyed was the Cyclone. The landmarked roller coaster was wrapped in a white shroud.

Nearby, the outlines of a ship-shaped ride called the Coney Clipper were barely visible. A striped roof over a merry-go-round was easier to see.

Alongside the Boardwalk, pale sand faded into a gray sea that was indistinguishable from a gray sky.

Such melancholy scenery. I loved it.

There was so much to look at and no time to feel panicky. I was only mildly perturbed when a wet breeze rattled the metal grillwork of the car I was sitting in. Those shrieks in the mist didn’t come from me. Really.

After I was back on the ground, I headed down the Boardwalk to look at the landmarked Parachute Jump. It stood like a ghost, silent and just barely there.

If it ever got fixed up, would I be brave enough to ride it? Who knows?