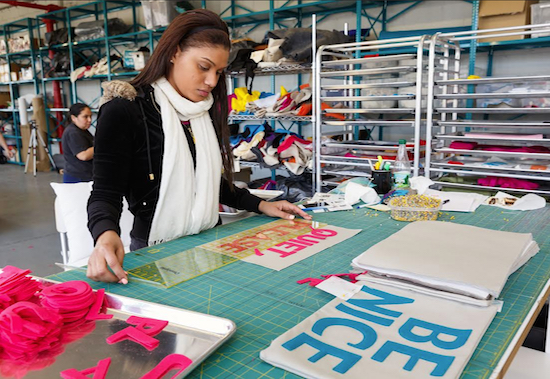 An employee works on a project at Alexandra Ferguson, one of the companies at Industry City. Photos courtesy of Industry City
Share this:

Industry City is growing by leaps and bounds, according to its directors, who said they expect the commercial complex in Sunset Park to generate 20,000 jobs by the year 2025.

Since 2013, employment at Industry City has more than doubled, and nearly half of the 4,000 people who work at the property today live nearby, officials said.

On April 7, Industry City opened The Innovation Lab, a 7,700-square-foot space that will provide residents of Sunset Park, Red Hook and other Brooklyn communities with job training and job placement services, technical support for entrepreneurs and other employment-related programs.

“Innovation Lab establishes a direct conduit between local residents and area businesses located both here at Industry City and elsewhere in Sunset Park,” Industry City CEO Andrew Kimball said at the launch of the new endeavor. “With tens of thousands of new innovation economy jobs projected to be created on the Brooklyn waterfront over the next decade, this workforce pipeline is more valuable than ever, and provides a real opportunity to strengthen the local community for residents and businesses alike for generations.”

The establishment of The Innovation Lab is part of the redevelopment of Industry City, led by Belvedere Capital and Jamestown. Industry City is a complex of dozens of commercial buildings located near the waterfront in Sunset Park.

Carlo Scissura, president and CEO of the Brooklyn Chamber of Commerce, said the waterfront has become “a significant employment hub in New York City.” He predicted that The Innovation Lab will help employers find skilled workers. “This center will be a terrific resource for Brooklyn’s residents and aspiring entrepreneurs, and it will greatly strengthen our business community,” he said.

The opening of The Innovation Lab follows a hiring initiative at Industry City that has placed more than 100 local residents in jobs over the past 2 1/2 years, according to officials.

The Innovation Lab is run by a public-private partnership that includes Industry City, New York City College of Technology and nonprofit groups such as Southwest Brooklyn Development Corporation, Opportunities for a Better Tomorrow and Brooklyn Workforce Innovations.

“I expect great results from The Innovation Lab. Our community will thrive only if people in and near Sunset Park get training and good local jobs. South Brooklyn employers are growing and must find talented people,” Menchaca said.

The Innovation Lab, located at 87 35th St., is open from 9 a.m. to 5 p.m. Monday through Friday, and offers training and job placement services geared toward jobs in the city’s rapidly emerging innovation economy.

The program’s specific services include pre-screening and job placement services with the more than 400 businesses based at Industry City, as well as other businesses along the Brooklyn waterfront, including Bush Terminal, Liberty View, Sims Recycling Facility and the Brooklyn Army Terminal.

“For over a century, the Sunset Park waterfront has been a place where commerce and industry meets innovation. It’s the place where people have found work to improve their livelihood and where products can be made to improve the world. Brooklyn Community Board Seven congratulates Industry City on the creation of The Innovation Lab and looks forward to the next century of innovation and shared opportunity for our community,” said Board Seven Chair Daniel Murphy.