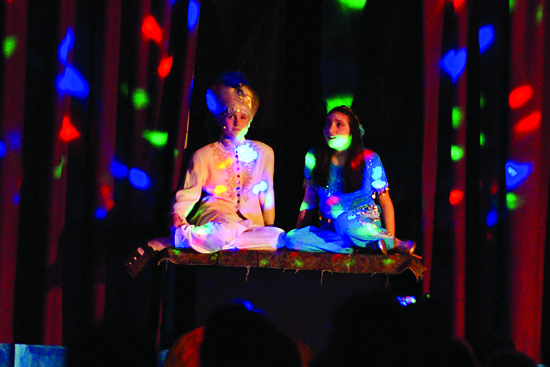 Featuring the lovable characters and songs from the hit Disney film, “Aladdin Jr.” tells the story of a poor boy from the streets who becomes a prince and finds love with the beautiful Princess Jasmine, thanks to the help of a magical Genie.

Andrea D’Emic, principal of the academy, which is located at 401 97th St., served as producer for the show. The production was directed by Susan Huizinga of Narrows Community Theater (NCT). NCT board member Ann Gubiotti served as assistant director and NCT also provided sound equipment for the performances.

Popular songs performed by the cast included “Arabian Nights,” “Friend Like Me,” “Prince Ali” and “A Whole New World.”

In the story, Princess Jasmine rebels against a traditional arranged marriage and sneaks out from the palace in disguise to the streets of Agrabah, where she meets Aladdin, who is being chased for stealing a loaf of bread. Together they flee an angry mob and escape to Aladdin’s chamber, but there he is seized by the royal guards. With no more room in the dungeons, Aladdin is brought to a cave on the outskirts of Agrabah, where he finds an old lamp.

After rubbing it out of curiosity, he awakens an eccentric and boisterous Genie, who grants him three wishes. First, of course, Aladdin wishes to become a prince so that he can impress Jasmine and marry her. Meanwhile, Jafar and Iago plot to rewrite a law that would force the princess to marry the Sultan’s highest-ranking official (Jafar) should she not choose a prince to marry by an impending deadline.

After Aladdin appears at the palace as Prince Ali Ababwa, he takes Jasmine on a magic carpet ride and wins her heart. But Jafar suspects that the new prince is really Aladdin using the influence of a genie and orders the royal guards to seize him. Aladdin uses his second wish to freeze the guards and escapes, leaving the lamp behind. Jafar comes into possession of the lamp and reveals the prince’s true identity to the Sultan before wishing, foolishly, to become the most powerful genie of all time, trapping himself inside the lamp.

Aladdin then uses his last wish to free the Genie, who has become a great friend, and promises his heart to Jasmine. Though not a prince, the Sultan is impressed by Aladdin’s integrity and allows him to marry Jasmine after all.