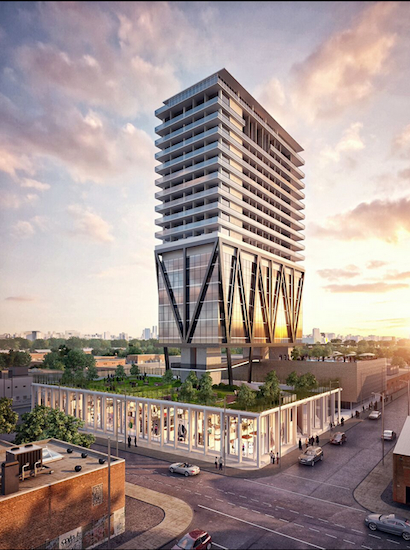 This is what the William Vale, a hotel now under construction in Williamsburg, will look like. Rendering by Genesis
Share this:

Should Auld Acquaintance Be Forgot?

Just imagine — Williamsburg will have a new hotel, the William Vale, in time for New Year’s Eve if things go Riverside Developers’ way.

“Nobody believes us. It’s a very aggressive schedule,” Mordy Steinfeld, Riverside’s director of operations and development, told Eye on Real Estate. “It might not happen. But that’s the target.”

Steinfeld, who recently took us and photographer colleague Rob Abruzzese on a hard-hat tour of the tower at 55 Wythe Ave., said six weeks’ worth of work time was lost on the development because of harsh winter weather.

Now that it’s spring, “we’re hoping to make up some of the lost time,” he said.

The day of our visit, the poured-in-place concrete structure stood eight stories high, and construction crews were busy. Each working day, there are 80 to 100 people on the job.

Steinfeld hopes the tower will top out at the end of August. The property, which initially was called the Level Hotel before a name change, will be 21 stories tall. A ride up a construction hoist on the corner site at N. 12th and N. 13th Streets took us to the fourth floor, where an outdoor swimming pool is being built and there will be outdoor event space.

We got an eyeful of jaw-dropping views of the Midtown Manhattan skyline and beautiful buildings on surrounding Brooklyn blocks. Steinfeld is happy about how the project is progressing.

“I’ve been with this since it was an idea in someone’s head,” he said. “To get to this point — it feels great.” Riverside will operate the William Vale itself, Steinfeld said. It will not seek a franchise deal with a hotel chain.

The firm will hire a very experienced general manager to be in charge.

Riverside, which belongs to developer Zelig Weiss, already owns and operates the Condor Hotel at 56 Franklin Ave. at the south end of Williamsburg.

Before you know it, the William Vale will be immersed in a four-way competition for customers, as one of four hotels in a two-block radius. One is the Wythe, which was included in the 2012 Travel + Leisure list of America’s Coolest Hipster Hotels. Another is the McCarren, which has a buzzed-about rooftop swimming pool. There’s also the Williamsburg, which is under construction at Wythe Avenue and N. 10th Street. It has drawn media attention with a plan to build a lounge inside a rooftop water tower.

Steinfeld is confident the William Vale will draw plenty of guests, though.

“The first thing to note is there is huge demand for hotels in Brooklyn,” Steinfeld said. “Brooklyn is not an alternative to Manhattan. Visitors are looking to come here.”

A Rooftop Park, an Urban Farm

Another factor in the William Vale’s favor, he said, will be its “porous environment” — the property has 700 feet of street frontage but less than 100 feet of traditional street wall. There will be a public plaza with trees, plantings and benches.

“It’s all about being inviting and open to locals and tourists,” he said. “It’s approachable.” Also, on a single-story building’s rooftop, reached by a staircase with a sidewalk entrance, there will be recreation space with grassy lawns and seating.

City zoning refers to space of this sort as a private park, he said. The hotelier will be responsible for the park’s maintenance. But it will be open to the public.

A small space on that rooftop has been set aside for an urban farm Riverside will operate. It might be used by a retail tenant or restaurant chef, Steinfeld said. Balconies For One and All

The William Vale will have 183 hotel rooms — all with balconies — located on the tower’s top stories, starting with the 11th floor. Twenty-five of the rooms will be suites.

Room rates will be around $400 per night, which will put the William Vale in a segment of the market hoteliers refer to as “upper upscale,” he said. It’s a notch less expensive than the priciest segment, which is “luxury.”

Beneath the hotel rooms, there will be several floors of commercial space.

Below stilt-like supports for the tower, there’s an approximately 3,000-square-foot space for a 160-seat restaurant. Riverside has hired consultant Elizabeth Blau to figure out how best to use the restaurant space. She oversaw the reopening of the famed Rainbow Room.

And along the Wythe Avenue edge of the site, there is a 20,000-square-foot retail building with floor-to-ceiling windows. This is where the rooftop park will be located. Construction is nearly complete on the shell of this building. On the day of our visit, Steinfeld said that  in two to four weeks it would be ready to deliver to tenants for their interior build-outs.

The retail building also has 20,000 square feet of below-grade space suitable for a kitchen area for ground-floor merchants or a spa or fitness center.

Riverside execs are in talks with prospective tenants for the retail building. The hotel honchos are being “picky” — they want the businesses they select to be “relevant” to guests at the William Vale and the other nearby hotels, Steinfeld said. For instance, clothing and jewelry shops would be a better fit than furniture stores. Where Did the Hotel Name Come From?

So. About the hotel’s new name, the William Vale. A branding firm Riverside hired, Love & War, came up with it.

In the 19th Century, William Vale owned land where the hotel is now being built. Love & War did research and found his name on a map, Steinfeld said.

A few weeks ago, Curbed.com published a posting suggesting that the William Vale belongs on “the list of the city’s most absurdly named buildings.”

Steinfeld shrugged off the criticism.

“We didn’t set out to please everybody,” he said.

He likes the name. “It sounds right. It feels right,” he said.