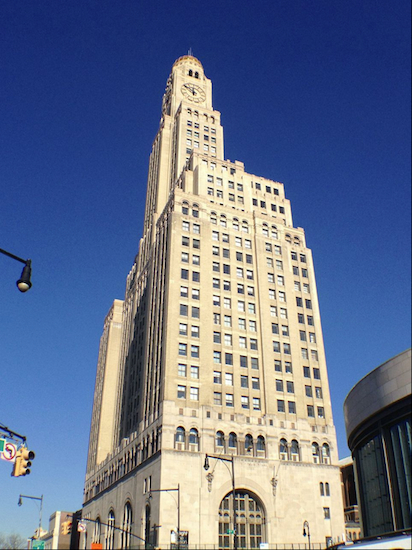 The former Williamsburgh Savings Bank is one of Brooklyn's most famous buildings. Eagle photo by Lore Croghan
Share this:

Does Anybody Really Know What Time It Is?

(The Baby Boomers among us remember this song  by Chicago.)

For decades, you couldn’t say “I do” to that question when you looked at the four faces of the clock atop the former Williamsburgh Savings Bank at 1 Hanson Place in Fort Greene.

They weren’t synchronized. Which one were you supposed to believe?

The explanation sometimes offered was that the wind, coming from different directions, affected the hands of the different clock faces in different ways.

Then in 2008, the Dermot Co. — which turned the neo-Romanesque office tower into a residential building in partnership with Canyon-Johnson Urban Funds — completed a meticulous renovation of the golden-domed clocks. Now they tell time as one. That seems like a serious show of respect for Father Time. And those clock hands are lit up with red lights at night. Such eye candy.

The famed landmark was the tallest building in the borough until a couple of new residential towers surpassed it. Until it went residential, 1 Hanson Place had sooo many dentists’ offices in it. The 512-foot tower, built in 1927 to 1929, is a designated city landmark, meaning its exterior is protected from alteration without the approval of the city Landmarks Preservation Commission.

The banking room (that’s what preservationists call it) on the first floor is landmarked as well. It’s one of just a small number of building interiors in New York City with this distinction. An events venue, Skylight One Hanson, has been a tenant in the jaw-dropping former banking hall since 2009.

“It’s a great honor to work at the historic space, to be able to re-open its doors to its Brooklyn neighbors and visitors and allow them to experience and immerse themselves in the building in a totally new way,” said Tiffany Aprile, Skylight Group’s senior venue manager.

“The beauty — and its historic narrative — evoke a strong sense of respect and intimacy when you step inside,” she said.

“My favorite thing to do at an event is position myself by the front of the main bank hall and watch as guests stop in their tracks and take in the 63-foot ceilings that glow from the mosaic laid in blues and golds.” The admiring guests put a flurry of photos on Instagram, she added.