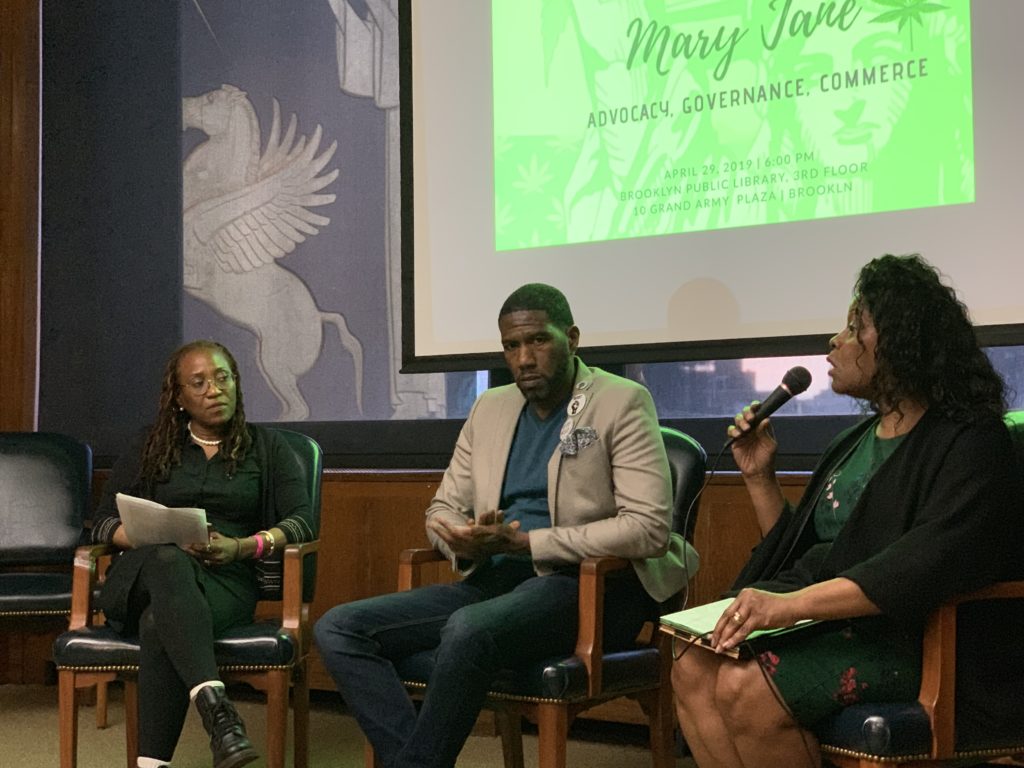 Jumaane Williams, speaking at a forum on marijuana legalization Monday, disclosed that he sold marijuana in high school. Eagle photo by Noah Goldberg.
Share this:

Public Advocate Jumaane Williams revealed Monday that he sold marijuana for “maybe a year or two” in high school – though he never actually smoked.

The recently elected public advocate’s disclosure came during a forum on marijuana legalization at the Brooklyn Public Library hosted by the Breakfast Clutch, called “Talking About Mary Jane.”

“I don’t think I’ve said this publicly before but in high school I sold weed for maybe a year or two,” Williams said.

The public advocate said he never smoked, but had eaten edibles in the past. Williams said he sold marijuana to pay for comic books and candy.

“You wanted some pocket change at times and I sold a couple nickel bags, dime bags, for maybe a year, year and a half. I don’t know that that’s the reason I want to make it legal, ’cause I’m not sure that a high school kid should be selling it, to be honest,” Williams told the Brooklyn Eagle after the event. “It shows it’s more common in spaces than people are willing to accept and it shows that there’s is just an over stigmatization of it, unnecessarily.”

Although he does not regret selling marijuana, Williams knows he will have to have a tough conversation with his mother.

“I don’t think my mom knows,” Williams said. “She’s going to be mad either way that it’s in the paper.”

At the forum, the public advocate said he was glad that marijuana legalization was not a part of Albany’s budget deal in March, because he did not think it was done right.

“I was happy that the state almost passed it, but I was happy when they pulled it back, because they seemed like they were rushing it through.”

Williams said marijuana legalization should include expungement of records like in Seattle, where the governor announced he would pardon thousands with records for marijuana possession misdemeanors dating back 20 years. Williams said it’s also key to make sure everybody can sell the product once it is legal.

“We now see from other places that people who have access to dispensaries don’t look like the people who have been ravaged by overpolicing for quite some time,” Williams said.

“You have people who are locked out of systems of getting permits, of getting education because they’ve done things like sell marijuana. So if you’re now making it legal you have to make sure that those same folks have the ability and accessibility to sell that as well,” he said.