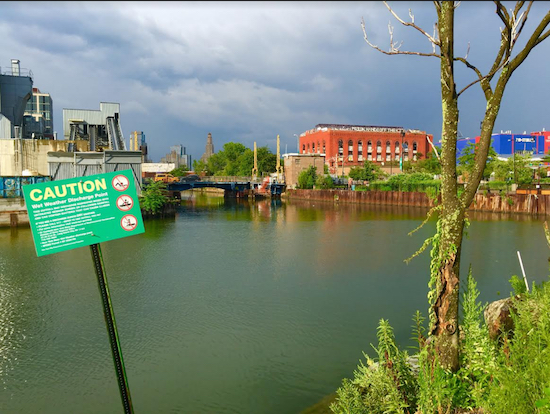 Try our self-guided walking tour of the Gowanus Canal — you'll see vistas like this. Eagle photos by Lore Croghan
Share this:

Everybody’s in love with the Gowanus Canal, including us.

One of the things that makes the weirdly picturesque waterway so fascinating is its jaw-dropping toxicity. Though if your jaw literally drops, for heaven’s sake don’t let any of the canal’s scummy water splash into your open mouth.

The 1.8-mile waterway winds through the neighborhood named Gowanus, then through Red Hook and out to Gowanus Bay. The canal is a Superfund site, with the Federal government in charge of its cleanup — which will probably take decades to complete, the Popular Science story notes.

The canal is so beloved, and so full of carcinogens and heavy metals.

Because of the canal, Brooklyn residents know expressions like “Lavender Lake” and “black mayonnaise.”

Lavender Lake is a nickname for the canal — and a canal-side bar at 383 Carroll St. makes use of the moniker.

Black mayonnaise is the 10-foot layer of desperately dangerous sludge at the bottom of the canal. Coal tar, other industrial toxins and sewage are in the sludge. Some of the canal’s legions of fans paddle through its stinky waters with the Gowanus Dredgers Canoe Club.

And we do mean stinky. As warning signs along the canal’s banks proclaim, rainwater that flows into it at wet weather discharge points may be “mixed with untreated sewage” and laced with “bacteria that can cause illness.”

Even when human feces aren’t pouring into the waterway, it smells bad in all kinds of different ways.

For canal lovers who lack the courage — or upper-arm strength — to paddle a canoe in it, the next best way to experience the canal’s odd urban beauty is to stroll around it.

We’ve devised a self-guided walking tour along streets that dead-end at the canal’s edge and on bridges that cross the canal. The streets are full of surprises — like a traffic sign we saw that originally said “END” but has been marked up by a graffitist and now says “SEND NUDES.” An ideal time to tour the Gowanus Canal is when thunderstorms are forecast. Old industrial buildings along its banks look especially dramatic in storm light. The dark skies turn its gray-green waters into mirrors, which will make your photos more Instagram-worthy.

If it does start raining, there are plenty of excellent restaurants and bars in Gowanus (the neighborhood) that can provide Shelter From The Storm, as the Bob Dylan song goes.

* Start at Butler Street between Nevins and Bond streets, where you can peek through a fence at the Gowanus Canal Flushing Tunnel Pump Station. This is where the canal starts. On the opposite side of the street, the century-old building at 233-237 Butler St. is the former Brooklyn headquarters and shelter for the American Society for the Prevention of Cruelty to Animals. * At the end of Sackett Street, a barbed-wire fence adds drama to the view of the canal. And 287 Bond St., a building on the corner of that block, is covered with an appealing flowery mural. * A wall next to the Union Street Bridge is covered with a mural called “Aqua Incognita” depicting imaginary canal creatures. The artist, NaNtu, is also known as Raul Ayala. When you stand on the bridge, there are dramatic views in both directions. * South of the Carroll Street Bridge, there’s a newly built esplanade that runs between the canal and 363 and 365 Bond St.

The esplanade ends where 2nd Street dead-ends at the canal. * The Third Street Bridge is another excellent spot for canal-gazing. And just south of it, there’s a landscaped walkway outside Whole Foods Market that leads to the canal’s Fourth Street Basin.

The grocery store has an outdoor rooftop bar with a bird’s eye view of the basin. * Go to the end of Second Avenue by walking west on 6th Street, then turning north on Second Avenue. You will be able to see the canal, the Third Street Bridge and the Batcave, which is a picturesque building at 322 Third Ave. that in the past was a hot spot for squatters and raves.

* The Ninth Street Bridge hangs high in the air, making the perspective it affords of the canal quite different from what you’ve seen up to now. * Our favorite spot on this tour is on Huntington Street where it dead-ends at the canal. It’s just north of 9th Street and east of Smith Street. This is where the graffiti-covered traffic sign that says “SEND NUDES” can be found.

* Finally, walk east from Hoyt Street along 4th Street, then turn south on Bond Street, which dead-ends at the canal.

If you want to see the end of the Gowanus Canal that flows through Red Hook, you’ll have to start walking much earlier in the day than we did. By the time we got to Bond Street, it was nearly sunset, so we called it a day.

As a final visual thrill, when we headed for home, we saw a Chevrolet Fleetmaster parked a few blocks away from the canal. This classic car was made in the late 1940s. It was soooo pretty. It's going down! 2nd bulkhead collapses along Gowanus Canal