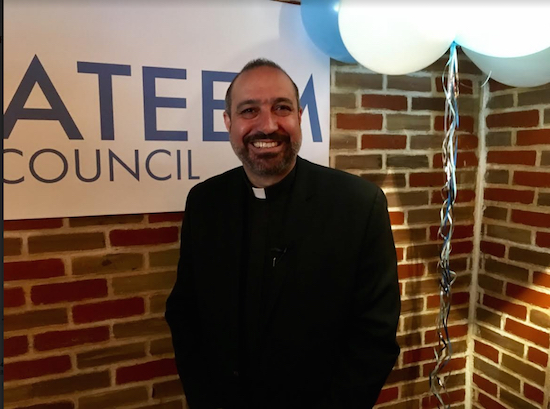 Rev. Khader El-Yateem, pastor of the Salam Arabic Lutheran Church in Bay Ridge, kicked off his campaign for City Council on Sunday to a packed house at Le Sajj, a Lebanese restaurant at 8221 5th Ave.

El-Yateem is the only clergy member running in a crowded race for Councilmember Vincent Gentile’s seat.  He sees this as an opportunity to bring a fresh new voice to the political landscape.

Endorsing him at the fundraiser were Palestinian-American political activist Linda Sarsour, who herself had considered running for the seat, and Carlos Menchaca, councilmember of the 38th District. His wife Grace and his family also attended.

El-Yateem is a local community advocate and faith leader who has a rich history and deep roots in the neighborhood. During the past 22 years, he has worked to build broad coalitions while serving the district as a pastor and community leader.

“I am proud to be an immigrant that has worked hard to build a life for my family and I in Dyker Heights and Bay Ridge,” El-Yateem said. “What sets me part from the rest [of the candidates] is that this campaign is not about me. I am just a vehicle for communities who have felt underrepresented for years.

“It’s time for real leadership, a new direction and bold vision,” he added. “It’s also time for someone who will put our New York City Council district first and bring all the voices of the district to the NYC Chambers. I am prepared to do that.”

The event brought out a wide range of supporters from all different cultural, religious and ethnic backgrounds. There was a celebratory feeling as attendees cheered the distinguished member of the Arab-American community.

“My campaign is about voice, voice for the community, voice for positivity, voice of inclusivity and to have everybody participate and be included,” El-Yateem told the Brooklyn Eagle. “It’s all about building bridges. Everyone will be represented at the end of this race. I’m very happy and excited about it.”

Council District 43 is home to the largest Arab-American community in New York state. If El-Yateem is elected councilmember, he will be the first Arab-American and Palestinian-American to serve in the New York City Council.