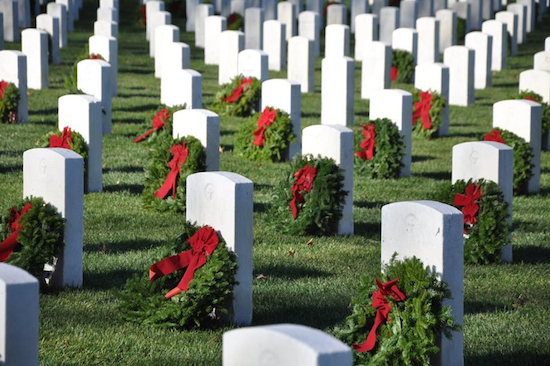 The graves of many military service members are now adorned with Christmas wreaths, thanks to volunteers from Viking Love. Photo by Teri Brennan
Share this:

Every military service member deserves to be remembered in death, especially during the holiday season. That was the sentiment expressed by leaders of Viking Love NYC, a Bay Ridge charity organization whose members spent a recent Saturday placing Christmas wreaths on the graves of service members and veterans at a Brooklyn cemetery.

National Wreaths Across America Day takes place on a Saturday in December each year. This year, there were wreath-laying ceremonies at 900 locations throughout the U.S.

“They do it at Arlington National Cemetery and at other cemeteries across the country where solders are buried. Danny Corbett got the idea that we should go to Cypress Hill Cemetery right here in Brooklyn,” McDermott told the Brooklyn Eagle.

“We raised $1,000 for the wreaths and eight of us went down there,” McDermott said.

There are an estimated 18,000 military service members and veterans buried at Cypress Hills Cemetery.

The wreaths are purchased from the Wreaths Across American group.

“It’s a really awesome thing to do since a lot of times there is no one to lay the wreaths on these graves and it’s really depressing,” Viking Love NYC member Justin Brannan told the Eagle in an email.

Prior to the wreath-laying, the volunteers stood at attention at the cemetery for a ceremony featuring a military honor guard.

After the ceremony, the volunteers quietly went to work, laying wreaths on rows and rows of graves.

McDermott, the owner of The Pour House, a popular pub on Third Avenue, said Viking Love was started two years ago by a group of Bay Ridge buddies seeking to help people in need. The name of the group comes from the fact that two of its founding members have a strong interest in Vikings and Nordic history.

“We try to help out any way we can. We reach out to people with different skills. During Sandy, we were reaching out to electricians, construction workers, carpenters; anyone who could help people rebuild their homes,” McDermott said.