Brooklynites In Florida: With Larry King, you can take the boy out of Brooklyn… We found an archived blog post from Clean Plate Charlie (Miami New Times) highlighting Brooklyn boy Larry King’s move from his legendary interview show at CNN to The Original Brooklyn Water Bagel Company back in 2010. From that blog we also learned that King’s first official celebrity interview was conducted at Pumpernick’s Restaurant in Miami Beach, Florida. The interview was with singer Bobby Darin.

When Larry King became an official spokesperson for The Original Brooklyn Water Bagel Company, Brooklyn Water Bagel founder Steve Fassberg said at the time: “Basically, he’ll be the face of the company. He’ll be the internet, print, radio presence. And you know, he hasn’t gotten behind a whole lot of products. We weren’t really looking for a national spokesman,” says Fassberg, “but Larry tasted the product, and he made a decision.”

Fassberg also pointed out that it wasn’t quite that easy to incorporate Larry King as company spokesperson. “We were working on this a very long time, and it got quite contentious. Larry’s voice or likeness couldn’t appear anywhere while he was still on CNN. We had to get Time-Warner’s approval, Ted Turner’s approval. But it was all worth it. Larry emanates credibility and integrity, he’s the face of Brooklyn, and he believes in the product.”

An entertaining excerpt from the original Clean Plate Charlie blog post. “Though it started last year up in Delray, the mad scientists at the Original Brooklyn Water Bagel Co. have figured out a way to create “Brooklynized” water. That’s the secret ingredient! According to the firm’s recent news release, “a 14-stage patented water technology creates Brooklynized water, allowing franchises to produce a distinctive Brooklyn bagel anywhere in the world. What will these magical minds think of next? Let’s hope it doesn’t have anything to do with ‘Miamified’ cocaine or ‘Chicagoized’ politics!” Sunset Park waitress who stabbed customer gets 15 years in prison June 13, 'Tracks on Humboldt St. Uprooted by the City' 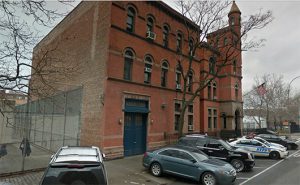