With the waterway's long history of drownings, suicides and sinkings, the anxiety may be justified. 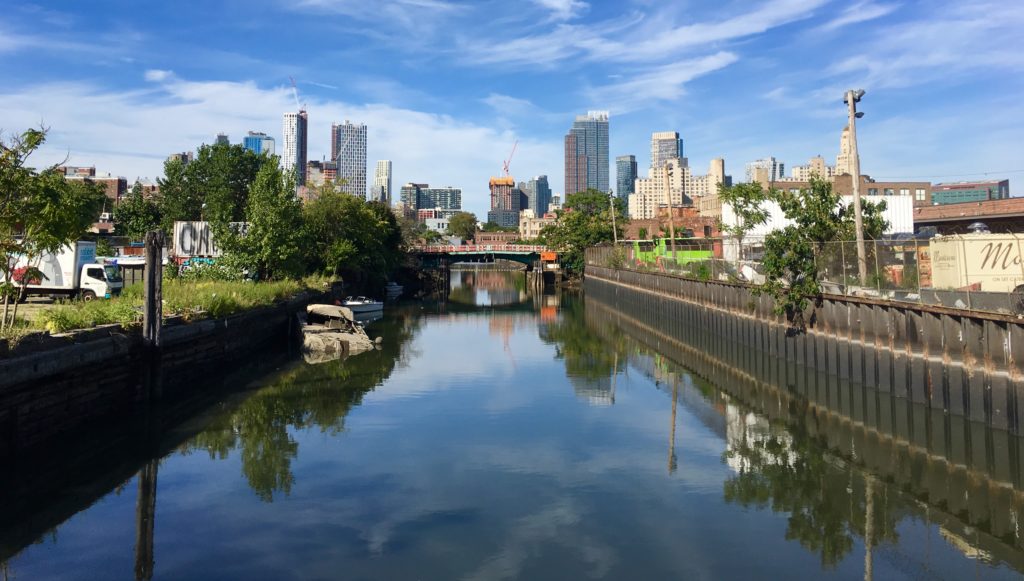 The toxic Gowanus Canal, the sight of many slips and falls — some deliberate, others not. Photo: Lore Croghan/Brooklyn Eagle
Share this:

That’s what Gowanus residents and activists warned at a recent community meeting, arguing that the 115-year-old overpass spanning the Gowanus Canal poses a risk for small-bodied passersby who could fall into the fetid waters below.

“It’s a danger there for young children,” said Linda Mariano of the Gowanus Canal Community Advisory Group and Friends and Residents of Greater Gowanus. “There are gaps where the bridge opens and closes — large gaps at the edges. It’s dangerous.”

Joseph Alexiou, a journalist, historian and author of “Gowanus: Brooklyn’s Curious Canal,” agreed, saying people have been plunging into the waterway since it was first constructed and he doesn’t expect that to change.

“They have been [falling in] for hundreds of years,” Alexiou said. “And they will.”

The aging bridge, built between Bond and Nevins streets in 1905, is an operating drawbridge that cost roughly $85,000 to build.

The city’s Department of Transportation, which oversees all of the bridges spanning the canal, considered replacing the bridge with a fixed span in 2016, though critics questioned whether that would impede barges from traversing the federal Superfund site during its costly cleanup, which is finally set to begin in September.

Related: The Gowanus Canal will never be clean

At January’s advisory group meeting, representatives from the Environmental Protection Agency said any concern regarding the safety of the bridge falls on the shoulders of DOT. (The department did not respond to a request for comment.)

“We’re not overseeing the bridge,” said Brian Carr, assistant regional counsel at the EPA. “We’re trying to hold on to regulating the environment.”

“Somebody could fall into the environment there. That’s my point!” Mariano responded.

A brief history of Gowanus Canal swimmers, divers and jumpers.

Residents’ concerns are not without merit. Reports of people entering the canal by one means or another are nothing new.

Ever since the waterway opened in 1869, there have been numerous incidents of people falling, jumping and swimming in the toxic waters. Some entered by choice, others perilously jumped in hopes of ending their lives, while others fell in by accident.

In more recent history, a man leapt into the canal this past September, a motorist drove a car into the waterway in 2016 and who could forget that guy who swam the canal — not once, but twice.

Related: Trump is still stuck in the toxic Gowanus Canal. The neighbors plan to leave him there.

Below are a number of instances from the Brooklyn Eagle archives of people entering the canal, which at one time or another, was found to contain typhoid, cholera, tuberculosis and gonorrhea. It was even nicknamed “Lavender Lake” for its concoction of colors that resembled Pepto-Bismol.

On May 22, 1876, the Eagle reported on someone who did not actually swim in the canal, though he was in such rough shape, it appeared as though he had.

“Joseph Irwin, of Harlem, was before Justice Riley this morning, for being found asleep in a hallway on Kent avenue last night. His wretchedness was so extreme, so preposterous, that the Judge gave him more than ordinary attention,” the Eagle reported. “He looked as if he had waded through the Gowanus Canal, fell of a flying trapeze, been knocked down by a horse car and then stepped in a load of saw dust.”

(Given his north Brooklyn location, Newtown Creek may have been a more fitting comparison.)

On June 20, 1884, a “despondent woman” attempted to “end her career” by jumping into the noxious waters.

On March 7, 1906, Fred Kreuger, 14, fell from the railing of the Third Street Bridge. He sustained “shock and possible injuries,” but was safely rescued.

On May 3, 1944, a three-year-old boy drowned after he fell off the Ninth Street Bridge while playing with his two older brothers.

On July 2, 1946, the Eagle reported, “The first day of the summer vacation brought death to John Minello, 10, of 625 Carroll St. John, a St. Agnes Parochial school pupil, was drowned when he fell into the Gowanus Canal from a makeshift raft he and a friend, Angelo Zagamilo, 9, of 263 Carroll St., found floating near the foot of President Street.”

On Feb. 21, 1951, the Eagle reported that “the organized virtues of the playground soon palled” for some neighborhood boys who “wandered to the waterfront, crawling under a fence to get into the asphalt yard of the Brooklyn Bureau of Highways at Hamilton Avenue and the foot of 13th Street. Dennis, boy-like, walked out on the stringpiece to show Mary how well he could balance and fell into the canal seven feet below.” The boy’s body was later found in the canal.

On May 24, 1953, a six-year-old boy from the Gowanus housing project fell in and drowned while playing with other boys.