For more than a century, the Union Street Bridge has afforded Brooklynites a safe and dry passage over the heinous waters of the Gowanus Canal.

As the bridge’s vehicle and pedestrian traffic has increased with population growth in the area, the city has applied short-term fixes to the span — but the consensus among the community and city is that it’s now time to find a replacement.

Residents have the opportunity to vote on whether the new crossing should be a drawbridge or a fixed one. The overpass is currently a drawbridge, but it has not been raised since 2013.

The fixed option would be cheaper and would take less time to build, but it would require the city to obtain private property through eminent domain to install mooring.

A fixed bridge could also impede the cleanup process of the canal because boats used for dredging the waste on the canal floor would not be able to pass through.

If the new bridge is a fixed crossing, trucks, in lieu of barges, will be used to dredge the waste, and they will have to trek the contaminated material through the streets.

The drawbridge would allow boats to pass, but it would be more costly and time-consuming to construct.

According to the city, a fixed bridge would take 24 to 28 months to construct, versus 30 to 39 months for a drawbridge.

Peter Basile, president of the Gowanus Alliance, a group devoted to enhancing and developing the neighborhood, told the Brooklyn Eagle that his organization is in favor of the drawbridge.

“The Gowanus manufacturing community has done a lot for the city,” Basile said. “The community deserves the infrastructure that makes the canal functional and makes it useable. It’s still a working waterway and we still have businesses that use it, and we don’t want to limit that use for the future by putting a bridge that is going to cut off a good portion of the canal to manufacturing or industrial use that it is clearly marked for.” Joseph Alexiou, a journalist, historian and the author of “Gowanus: Brooklyn’s Curious Canal,” agreed with Basile.

“I think it should be a drawbridge because it retains a certain fabric of the neighborhood, which we are increasingly losing,” Alexiou told the Eagle. “Also, it would allow us to keep some toxic waste from being trucked through a residential community and the streets of New York.”

Alexiou addressed the role the Union Street Bridge plays for the neighborhood.

“When the bridge opens, it’s an exciting event for the community,” Alexiou said. “When it does open, people come and watch it. Kids from various schools often run to see it, and there’s an argument that the bridge continues the historic legacy of the Gowanus Canal as a formal industrial shipping lane.” 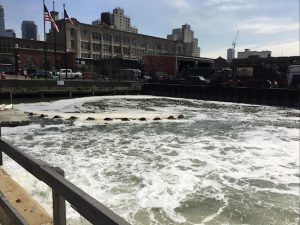