Borough president says information is the first line of defense. 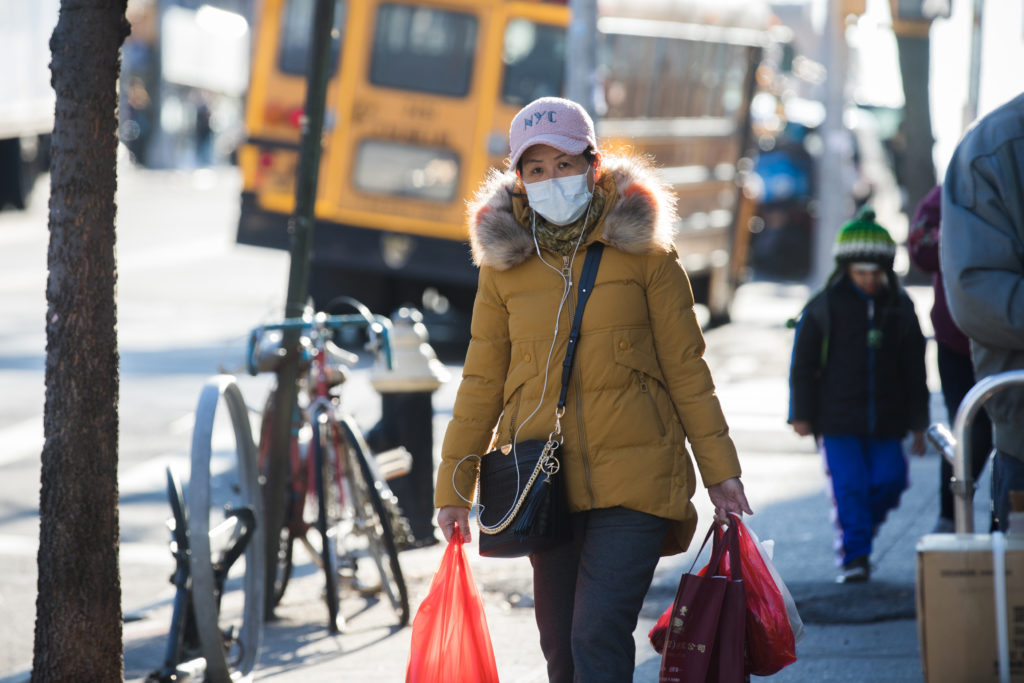 A woman wearing a medical mask does her shopping in Sunset Park, Brooklyn on Wednesday. Photo: Paul Frangipane/Brooklyn Eagle
Share this:

The fast-spreading novel coronavirus (2019-nCoV) is a big worry for residents of Sunset Park, the city’s largest Chinatown. Some residents are wearing protective face masks as they stroll, shop and bring their children to school in the neighborhood. To address concerns, Borough President Eric Adams convened a press conference Wednesday at the Chinese-American Planning Council to explain what his office was doing about a potential outbreak.

Sunset Park and adjoining sections of Bay Ridge and Borough Park are home to at least 150,000 Chinese, according to City Journal.

“Sunset Park is the Beijing of America,” Adams told reporters. While there are no confirmed cases in New York City yet, many Sunset Park residents are just now returning home after traveling to China for the Lunar New Year celebration, he said.

The Borough President’s office is coordinating a multi-lingual initiative in cooperation with the city’s Health Department, NYC Health + Hospitals and the Centers for Disease Control to get the word out about the virus. This includes distributing informational flyers in three languages (English, Spanish and Chinese) and combating the spread of misinformation.

Washing hands with soap or an alcohol-based hand sanitizer is the number one way to ward off infection, Adams said. To make his point, he displayed a bar of Irish Spring soap to reporters. “Clean your hands as much as possible,” he said.

People should also avoid touching their faces with unwashed hands, cover their mouths with their elbow while coughing or sneezing, avoid sick people who have recently returned from China and stay away from wild game, which can carry the virus.

Symptoms include fever, cough and shortness of breath, often leading to pneumonia. The death rate is unknown as of yet, but it appears to spread very quickly.

Are face masks necessary? Can you even get them?

A doctor from Maimonides Medical Center assured the crowd that there was no need to wear face masks at this stage, since there are no confirmed cases of coronavirus yet in the city.

“We don’t recommend that the general public wear masks,” emergency medicine specialist Dr. Eitan Dickman said. “Of course people have the right to if they choose to.”

“We’re in the middle of the flu season,” he urged. “It’s very important to get the flu vaccine.”

But after reporters peppered officials about the effectiveness of masks and reports of shortages and price-gauging, Adams said these questions were important and asked health experts to explain more about the correct usage of masks.

A volunteer donned a standard surgical mask and a health professional explained how to wear it correctly, tightly molding it around the nose with the bendable stay.

To effectively block out airborne viruses, masks rated N95, like those used used in hospitals and medical facilities, are required. According to the CDC, N95 respirators filter out at least 95 percent of airborne particles if worn correctly, which means forming an airtight seal.

Shops across the city, however, say they are sold out of masks. Since the coronavirus outbreak, there has been a run on masks and other protective equipment world-wide. On Wednesday, the World Health Organization connected via a teleconference call to more than 340 organizations aiming to “develop a market capacity and risk assessment for personal protective equipment.”

At the moment, the flu is worse

Coronavirus has now spread to 19 countries and sickened more than 6,000 people in China, according to the CDC. There are 91 confirmed cases outside of China, including at least five in the United States. As of Wednesday, 132 people are believed to have died from the virus, for which there is as yet no treatment.

While it sounds serious, officials stressed that the number of people getting the flu and dying from it is much higher than those getting the coronavirus at this point, and they repeatedly urged people to get flu shots.

CDC estimates that so far this season there have been at least 15 million illnesses, 140,000 hospitalizations and 8,200 deaths from flu. New York City reported a high rate of flu during the week ending Jan. 18, the latest data available.

Chinese seniors not too worried

More than a dozen seniors also gathered at the Chinese-American Planning Council to hear about the coronavirus plans. Several said they weren’t very worried about it.

“Our medical system has enough protection,” Xiao Lan Yu told the Brooklyn Eagle through a translator, Senior Services Supervisor Helen Chen. If she feels ill, Xiao said she would simply visit her family doctor. She added that she felt she could get accurate information about the virus from Chinese language newspapers and TV.

Ming Rong Zhang said that he felt that the Borough President’s informational efforts were a good idea.

“This information is helping a lot of community members understand the basic protection for every day,” he said.

When seniors were asked how many of them had gotten a flu shot this season, almost all of them raised their hands.

One of the purposes of the BP’s press conference was to keep people informed and prepared, but not to spread panic, Adams said.

“We’re coming together to dispel rumors and get information out,” he said.

Steve Mei, director of Brooklyn Community Services for the Chinese-American Planning Council, said there were many untrue rumors and debunked theories going around on the popular Chinese social media site WeChat, and they should be ignored.

“Go about your life, enjoy living in New York, enjoy the culture and heritage,” he said.