All eyes on DUMBO’s historic streets as rehab begins 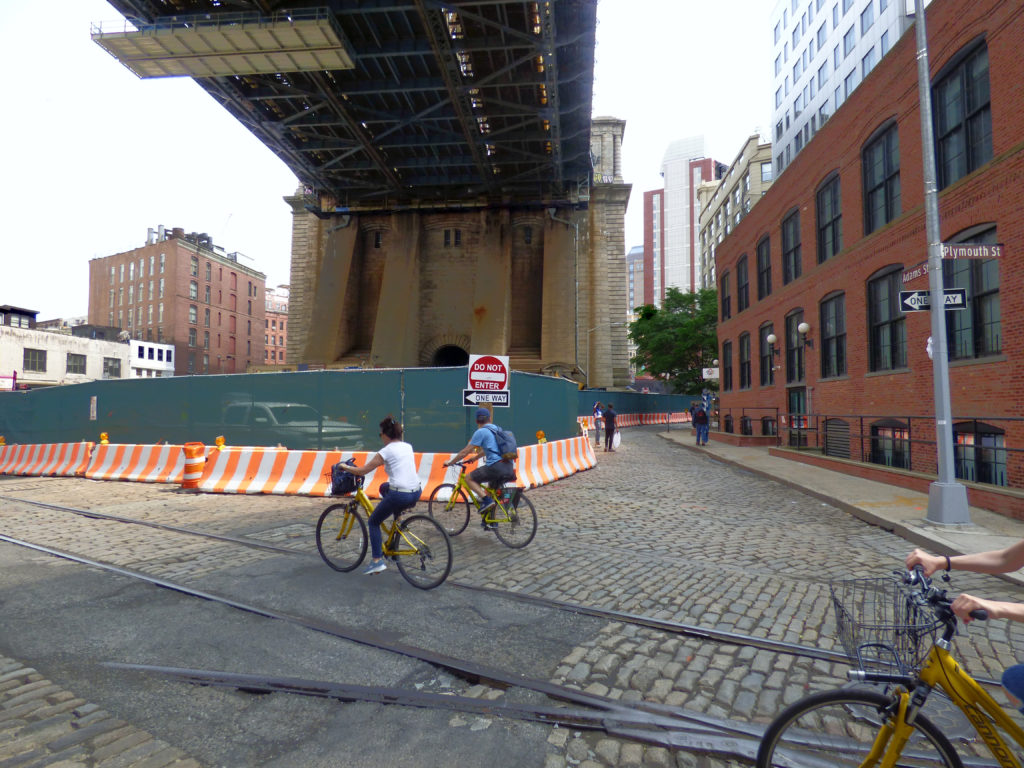 The final phase of a $20 million street, water and sewer renovation plan has begun in DUMBO, causing concern over the neighborhood's signature Belgian block streets. Eagle photo by Mary Frost
Share this:

The DUMBO Neighborhood Alliance is voicing alarm over the future of the neighborhood’s streetscapes as the city starts its second and final phase of a $20 million street, water and sewer renovation plan.

According to the group, more than half of the hand-cut Belgian blocks paving DUMBO’s historic streets — which are not, as they are frequently confused with, cobblestones — have been removed since the picturesque neighborhood received Historic District designation in December 2007.

In theory, that designation protects a district from any demolition or modification that would alter its fundamental historic character. The old-fashioned streets and the Belgian block — identified in the designation report as essential parts of the neighborhood’s identity — have also provided the scenic backdrops for hundreds of films and attracted thousands of tourists.

Now, with DOT beginning to dig up the streets under the Manhattan Bridge overpass for the latest stage of the rehab, Doreen Gallo, president of DNA, fears that more of the district’s unique atmosphere will be lost.

The city says it won’t make the same mistakes it has made in the past with the historically significant granite. But Gallo, who has acted as a watchdog, preservationist and neighborhood activist for more than 30 years, is not convinced that the city understands the importance of the blocks, which were custom sized for specific locations and laid down to create patterns.

The blocks removed by contractors are being stored at New York Paving’s warehouse and will be replaced, the city maintains. But Gallo says that in the past, previous contractors never returned the blocks after patch jobs were completed.

The city’s Department of Transportation and the Landmarks Preservation Commission “have failed preservation and continue to approve work that has destroyed our streetscapes in our [Landmark] Designation report,” Gallo told the Brooklyn Eagle on Friday. “The contracts are not supervised.”

In a May 9 letter to Landmarks chair Sarah Carroll, Gallo included photos of blocks dug up haphazardly on Adams Street as part of the job in May.

“This is NOT a picture of Preservation,” she wrote. “After all of the meetings and chatter between agencies, elected officials, there is no real oversight to this project by real preservationists contributing to the plan. As a result we are contributing to the further destruction of DUMBO by ignoring the people who have been trying to preserve this important historic place for over 34 years.”

In a reply to Gallo, Carroll acknowledged the historic streetscapes had been damaged in the past, but that Landmarks is “monitoring the current project, which has been carefully thought-out and improvements have been implemented to protect the historic street materials, in no small part because of your steady, on-going [sic] advocacy.”

Carroll said in her letter that the streets would be photographically documented prior to the removal of the Belgian block, and that the stones from half of each street block would be “removed and placed in a discreet location in a nearby storage yard which is secure and lit.”

“When it is time for the stones to be reinstalled, they are to go back to the same section of streetbed from which they were returned and in the same general pattern,” she said.

Carroll also asserted that a professional archeologist would be on site monitoring the work and submitting daily reports documenting the activities and developments of each day.

Alexandria Sica, president of the DUMBO Improvement District, thinks the city is going to get it right this time.

“Obviously work needs to be done on the streets, since they are broken and hazardous,” she told the Eagle. “We are thrilled they are repairing them and also thrilled they are saving and reusing the Belgian block. There’s been a lot of attention on this.”

While the Adams Street work was part of the DOT project, Sica said the careless work photographed on Plymouth Street was done by National Grid’s contractor, not DOT’s contractor Halcyon Construction. She urges a wait-and-see approach.

“This is just the beginning of the project,” she said. “The city has a very robust system in place to monitor what happens with the Belgian blocks.”

The four-year plan from DOT is officially called DUMBO/Vinegar Hill Street and Plaza Reconstruction project. This phase, the second and last, will replace water and sewer lines from Main Street to Jay Street and from Front Street to Water Street. The project’s purpose, as stated on the DOT website, is to “reconstruct the cobble roadways and subsurface utilities” on multiple blocks of DUMBO and Vinegar Hill and build out Pearl Plaza, a triangular public space next to the Manhattan Bridge Archway.

“All the Belgian Blocks that can be salvaged will be reused and the project will observe all the ADA requirements,” DOT told the Eagle in a statement. “It will also include reconstruction of the roadways and resetting of the cobblestones, bike lanes, ADA-compliant sidewalks, pedestrian ramps, crosswalks, inclusion of a plaza in Anchorage Place, and the updating of the sewers, a water main, and private utilities.”

DOT says it has worked with NYC Department of Design and Construction, the DUMBO Improvement District, and conducted “extensive community outreach” with the residents of DUMBO and Vinegar Hill on the repair plan.

Gallo says, however, that DNA “strenuously” objected to the plans presented by DOT.

Besides the loss of the original block, she objects that in some areas, such as the Pearl Street Triangle and on bike paths, the authentic granite blocks will be replaced with flat rectangular stones, which she calls “fake blocks.”

The city agency maintains that the replacement blocks are smoother and safer for bike riding.

DDC’s contractor is expected to complete the work in spring 2024, DOT said.