What the Heck Is This Doing Here? 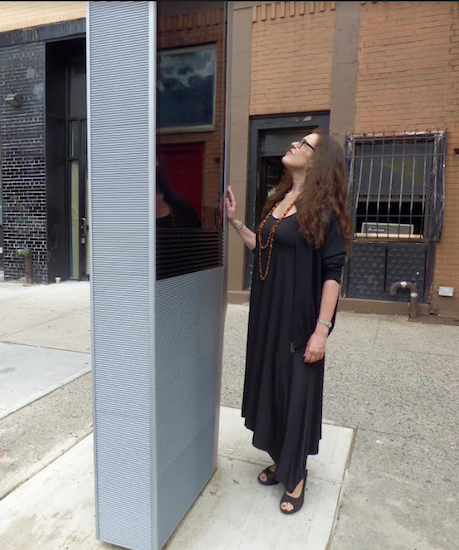 Cobble Hill resident Judith Barnes came back from a vacation last week only to find a LinkNYC kiosk installed directly in front of her apartment window. She wants the city to have it removed. Eagle photos by Mary Frost
Share this:

Hundreds of 9-1/2-foot-tall LinkNYC kiosks — which provide free phone, Wi-Fi service and USB charging stations — have been installed across the city, with more coming every day. While they are getting increased usage, the kiosks, which come equipped with three built-in cameras and advertising, are not popular with everyone.

Case in point: Cobble Hill resident Judith Barnes came back from a vacation last week only to find a LinkNYC kiosk installed on the sidewalk directly in front of her apartment window.

Barnes is the founder of Vertical Player Repertory, a critically acclaimed opera company operating out of her home at 219 Court St. near Warren Street.

Barnes told the Brooklyn Eagle she was shocked to see the “massive” tower just feet from her window.

“It’s an eyesore — it’s a visual pollution, light pollution, noise pollution issue,” she said. “It’s a privacy issue. It has cameras. It’s right outside my door … 6 feet from my window.” Barnes added, “It’s a potential magnet for loiterers, people hanging around, charging their phones, staying here for a while — and this is my home.”

The unit will be turned on in a week or two, a LinkNYC technician told the Eagle.

The advent of the LinkNYC system was publicized by numerous New York City news outlets over the past year or so. Many articles played up the use of the Links by the city’s homeless, who frequently set up camp around the kiosks and watched pornography on the internet-connected tablets. The full, free internet has since been disconnected.

A notice about the coming of the Links was placed on the Community Board 2 agenda for discussion, but Barnes said she is disturbed that there wasn’t public notice sent to impacted home owners.

“There was no reaching out to the public to say, ‘What do you think about this?’ And especially to the people who actually live next to these things or own property next to these things,” she said. Barnes says her home is the only ground floor residence on the block.

She says she is determined to fight the kiosk. “It might be Quixotic, because they’re installing 7,500 of these things,” she allows.

Barnes said she has spoken with and sent “many emails” to Community Board 2, NYC Department of Information Technology & Telecommunications (DoITT), Councilmember Stephen Levin’s office and the office of Public Advocate Letitia James.

“It seems like the public advocate is taking it seriously,” she said. “I have a case number.”

It doesn’t seem likely, however, that the Link will be removed.

Stacy Gardener, director of External Affairs for the NYC Department of Information Technology & Telecommunications, responded to Barnes via email.

Gardener wrote, “In response to community concerns, we have removed the browser function from all LinkNYC tablets and lowered call volume by 50 percent at night. The only sounds that originate from the kiosks are phone calls and a voice-assist for the visually impaired.”

Since these changes, citywide, there have been very few complaints relating to noise and loitering, Gardener wrote. “Just one complaint last month out of 920 active kiosks across the five boroughs.”

Gardener wrote that the kiosk “does indeed meet the siting criteria and is a proper distance from the existing fire hydrant and other city infrastructure, including other proposed locations for LinkNYC kiosks.”

Several city- and CityBridge-connected officials urged concerned residents to give the Links a chance.

Ruth Fasoldt, community affairs manager for CityBridge, (which is part of a consortium that includes Alphabet, parent company of Google), told the Eagle, “Nearly two million people have signed up to use LinkNYC’s free WiFi, and every Link that we have activated in Brooklyn serves thousands of Wi-Fi sessions every week. While not everyone will choose to use LinkNYC’s services, nearly one in five New Yorkers do not have access to broadband internet at home, and we are committed to bringing LinkNYC’s free services across the five boroughs.” Barnes is not the only one to express concern about privacy issues. In March 2016, the New York Civil Liberties Union (NYCLU) sent a letter to the Office of the Mayor warning that, under the privacy policy in effect at that time, CityBridge could potentially retain “a vast amount of information” about phone, data and photo usage, which could be shared with NYPD.

According to NYCLU, the new policy is better in four ways: browsing history from personal devices will not be stored; the retention period of technical information has been cut back to 60 days; disclosure of information will occur “only as required by law and with notice”; and additional limitations on camera use and disclosure of data are in place.

In addition, the cameras over the tablets — like the one pointing directly into Barnes’ living room — remain disconnected, for now. The other two cameras remain pointed north and south along the sidewalk for Link security and potentially other future purposes, such as crime response.

Despite the improvement, Barnes said she is still troubled. “They might have those regulations in effect now, but with the president we have, overnight things can change.”

“Even if they destroy the footage every seven days, they’re going to have a documentary of my life. I should do a performance piece or something,” she laughed as she glanced outside her window. “I almost feel like the camera is watching us right now!” What the heck is this doing here? LinkNYC kiosks not a hit with everyone