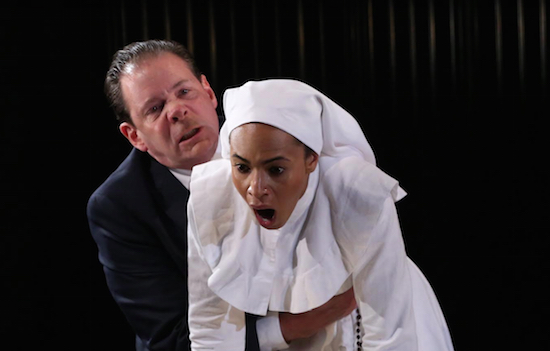 “Measure for Measure” at Theatre for a New Audience's Polonsky Shakespeare Center features Thomas Jay Ryan as Angelo and Cara Ricketts as Isabella. Photo by Gerry Goodstein
Share this:

This is a play about justice and mercy, hypocrisy and a hot nun.

That’s what Angelo thinks about Isabella, who radiates goodness and grace and is set to begin her novitiate with the famously strict Sisters of Saint Clare.

When he’s around her, the virtuous-seeming man with the angelic name behaves like a devil.

He tells the virginal Isabella she must have sex with him, or he will have her brother Claudio executed after prolonged torture. Angelo is the acting ruler of Vienna, put in charge of the city by its mysteriously absent Duke, and her brother has committed a capital crime.

So what if it’s fornication, an offense that has gone unpunished for 14 years? So what if the woman Claudio had sex with is his fiancée, and now she’s pregnant? Angelo’s going to enforce the no-nookie law simply because he can, unless Isabella gives in to his demands.

William Shakespeare’s “Measure for Measure,” probably written in 1604, feels very contemporary in  the just-opened Theatre for a New Audience (TFANA) production at Polonsky Shakespeare Center in the Brooklyn Cultural District.

Simon Godwin directs a stellar cast in an electrifying, high-energy staging of the dark and often funny play. Godwin, an associate director of the National Theatre in London, is acclaimed on his home turf as a director of Shakespeare and other classic drama as well as contemporary plays. In 2012, he won the London Evening Standard Theatre Award for Emerging Director.

This is his first time directing an American acting company in a Shakespeare play.

To underscore the of-the-moment relevance of “Measure for Measure,” he reimagines Vienna as a modern-day city.

It’s a debauched place that audience members enter by walking through backstage hallways that have been transformed into a brothel. There are sex toys and smutty photos. A sex worker and a client embrace in a glass-walled room.

Inside the auditorium, a group of musicians plays music to set the mood. The lyrics to one tune include the opening lines of Shakespeare’s Sonnet 129: “Th’expense of spirit in a waste of shame / Is lust in action.”

There’s a gigantic dining-room table with candles burning in candelabra. Dining-room chairs serve as seats for a dozen playgoers.

When “Measure for Measure” begins, the Duke is curled up asleep, his clothes disheveled as though he’d passed out while partying like a dissolute playboy. An incandescent Isabella, a charismatic Duke

It soon becomes apparent that the Duke has put Angelo in charge of the city as a test.

The Duke hangs around Vienna, disguised as a friar, to see how his deputy will handle the huge power he has been handed— and to secretively intervene when the temporary ruler turns into a tyrant.

There is so much to love in this production.

Cara Ricketts is an incandescent Isabella. She delivers a mesmerizing performance. Ricketts is a highly-regarded Canadian theatre actress who has starred for several seasons at the Stratford Festival in Ontario.

Jonathan Cake is a charismatic Duke. The British-born stage, film and TV actor is an accomplished Shakespearean. In his most recent television role he played a Brooklyn-based photographer named Furkat on the Showtime series “The Affair.” Thomas Jay Ryan brings depth and nuance to the role of Angelo. Shakespeare wrote him a soliloquy in which he says it’s Isabella’s saintliness that makes him lust after her. Ryan infuses the speech with such bewilderment and self-disgust.

The American stage, film and TV actor appeared in the acclaimed Broadway production of “The Crucible” that Ivo van Hove directed last year.

There are many fine performances in “Measure for Measure’s” secondary roles. For instance, Leland Fowler is a moving Claudio, caged behind prison bars. A speech to Isabella about his fear of death that echoes Hamlet’s “To be or not to be” soliloquy is especially memorable.

Zachary Fine is a hilarious Elbow, a constable who lards his sentences with malapropisms. He looks like a manic mall cop in short shorts.

Fine does an equally hilarious job with the role of long-jailed Barnardine, who drinks his days away in prison and refuses to show signs of repentance, real or feigned.

The playhouse is at 262 Ashland Place in Fort Greene.