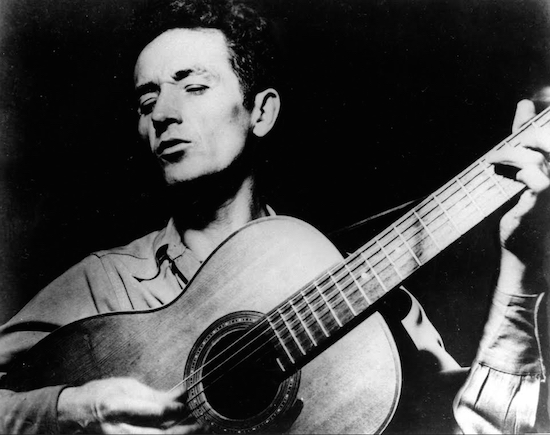 In light of the recent backlash to Donald Trump in Brooklyn — such as the Schnitzel Haus restaurant on Fifth Avenue in Bay Ridge having to remove a photo of Trump from its wall due to angry patrons’ comments on Yelp — people may be surprised to learn of a decades-old feud that involved Trump’s father Fred and America’s great folk troubadour Woody Guthrie.

While the signed photo of Trump was only down off the wall at the Schnitzel Haus for one week, and has since been replaced, the Guthrie-Trump feud has never been resolved.

The Oklahoma-born Dust Bowl balladeer and former resident of Brooklyn lived for a time in a housing project built and managed by Fred Trump. Recently, archivists have discovered an alternate version of Guthrie’s classic “I Ain’t Got No Home,” with lyrics that appear to chastise the senior Trump for creating a segregated community within the Brooklyn apartment complex where Guthrie lived.

Guthrie’s songs were the voice of the American conscience. “This Land Is Your Land” still echoes just as loudly today “from California to the New York islands” as it did when he first wrote it in 1940 as a response to hearing Irving Berlin’s “God Bless America” overplayed on the radio. Guthrie saw a less than idyllic America and felt that Berlin’s song was sugar-coating the truth. Guthrie loved his country and was not afraid to address hard issues that existed in America at the time, such as racism and rampant poverty.

Mermaid Avenue, Beach Haven and “I Ain’t Got No Home”

In 1946, Guthrie moved into a modest apartment at 3520 Mermaid Ave. in Coney Island with his wife Marjorie and their daughter Cathy. In 1947, Cathy died in an apartment fire. Later that year, Guthrie’s son Arlo was born, followed by another son Joady in 1948 and daughter Nora in 1950.

“I Ain’t Got No Home,” one of Guthrie’s famous Dust Bowl Ballads from 1940, would take on new meaning a decade later.  In 1950, Guthrie had moved to Beach Haven, an apartment complex near Coney Island that was built by Trump to house a large number of veterans returning from WWII. Guthrie himself had served in the Merchant Marine years before.

Will Kaufman, a professor of American literature and culture at Britain’s University of Central Lancashire and author of the book “Woody Guthrie: American Radical,” discovered an alternate lyric to “I Ain’t Got No Home” while searching through the Guthrie archives. The updated version reveals Guthrie’s feelings about Trump and the housing project in which he was living. My money’s down the drain, and my soul is badly bent

Beach Haven looks like heaven, where no black ones come to roam

No, no, no, Old Man Trump, old Beach Haven ain’t my home.

Kaufman also discovered a passage that Guthrie wrote, further addressing his disdain for what Kaufman called “the racist codes that continued to put decent housing — both public and private — out of reach for so many of his fellow citizens.”

Racial Hate he stirred up

In the bloodpot of human hearts

Over a half-century ago, Guthrie wrote a scathing condemnation of developer Fred Trump, portraying him as a racist and failed landlord. While Guthrie’s old home on Mermaid Avenue is gone now and the neighborhood he once lived in has undergone a revitalization, there’s no telling what Guthrie would make of his Beach Haven apartment today or of Fred Trump’s son running for president of the U.S.

One thing is certain: Guthrie loved Coney Island, and when he died in 1967 after years of battling Huntington’s Chorea, Marjorie, Joady and Arlo brought his ashes to the boardwalk and threw them into the ocean, alongside the beach that served as the inspiration for so many of his greatest songs. How the Klezmatics ‘collaborated’ with Woody Guthrie