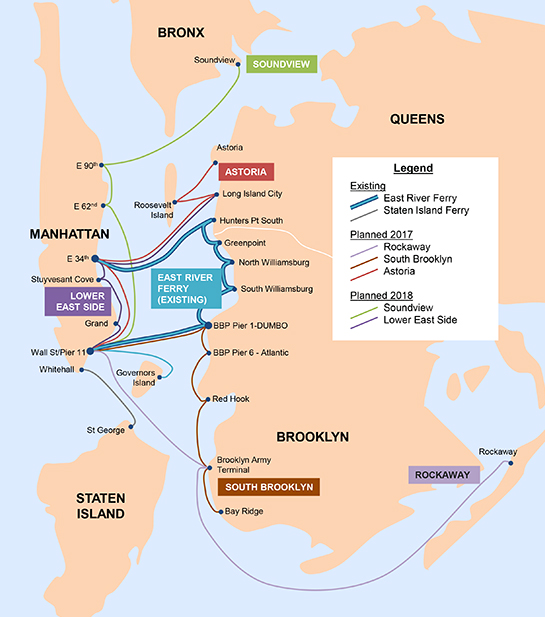 The city is working on a plan to expand ferry service to South Brooklyn, Rockaway and other areas. A public meeting will be held at 6 p.m. Monday night at Brooklyn Borough Hall as part of the environmental review process. Map courtesy of the NYC Economic Development Corporation

A public meeting about the city’s plan to expand ferry service to Red Hook, Sunset Park, Bay Ridge, Rockaway, and other areas of the city will be held at 6 p.m. Monday, Sept. 28 at Brooklyn Borough Hall as part of the environmental review process.

The five new routes, which also include service to Astoria, the Lower East Side and Soundview (The Bronx) are expected to cut commute times and will cost $2.75, the same as other forms of mass transit, through the use of subsidies.

“By then maybe I’ll get over my fear of water,” said long-time Bay Ridge native Rick Buttacavoli, who sees the new service “taking off.” He said he has some concerns, however, about the congestion it might bring to 69th Street in Bay Ridge. “The pier is not Whitehall.”

Buttacavoli hopes the ferry will relieve some of the pressure on the subway. “In Bay Ridge we know the ‘R’ stands for ‘Rarely’ and the ‘N’ stands for ‘Never,’” he said.

Christine Clark, a member of Sunset Park Restoration, told the Brooklyn Eagle in February that the ferry would provide a viable transportation option for residents.

“I have felt for years that we should be utilizing our waterways much more than we currently do.  Some of the routes are very exciting, such as connecting Manhattan to Coney Island and South Brooklyn to Red Hook so people can shop at Ikea and Fairway. I hope that it is for both weekends and weekdays and not just rush hours as I would love to use it on weekends with my school aged daughters,” she said.

Clark added that she hoped the ferry schedule will accommodate busy commuters who need to get to work.

The ferries are an initiative of Mayor Bill de Blasio and the New York City Economic Development Corporation (NYCEDC). The city says the new routes will be convenient and affordable for growing neighborhoods with limited transportation options, and will increase the resiliency of the city’s transportation network.

The city is looking for comments on the Draft Scope of Work for the Environmental Impact Statement (EIS). Comments will be accepted until 5 p.m. on Thursday, October 8. Written comments may be submitted by email to [email protected] or by mail to the Mayor’s Office of Sustainability, Attn: Denise Pisani, Senior Project Manager, 253 Broadway, 7th Floor, New York, New York 10007.

Oral comments will be accepted at Monday’s scoping meeting.