Faith In Brooklyn for Dec. 2 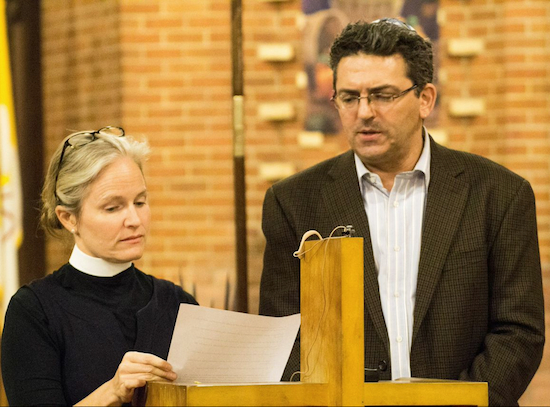 The Rev. Kimberlee Auletta and Cantor Sam Levine in a dialogue about protecting the earth. Photo by Francesca Norsen Tate
Share this:

Protecting the Earth Is a Theme of Interfaith Thanksgiving in Midwood

Our Lady of Refuge Church was filled with the sounds of the popular praise song “This Is the Day” last Sunday, juxtaposed with its Hebrew counterpart, “Ze Hayom.” Both are expressions of Psalm 118: 24.

Members of several faith communities joined in as they gathered in the large sanctuary at Ocean and Foster avenues for a joyful 14th annual interfaith Thanksgiving service.

This annual tradition is the result of a joint effort of clergy and laypeople, with members of Our Lady of Refuge, neighboring Church of the Nativity (Episcopal), the East Midwood Jewish Center and musicians and choruses from the Amity School and all three congregations.

During his opening remarks, Fr. Michael Perry, pastor of Our Lady of Refuge Church, reminded the gathering of the precious right to worship in the United States.

“If we were in Iraq right now, we’d have our heads chopped off. We are doing something in this country that not everybody can do — and that is, pray together,” Fr. Perry said.

The liturgy included thanksgiving prayers from many faiths, including the Roman Catholic and Episcopal rites from the Christian tradition; and from the Native American and Ba’Hai traditions.

The interfaith service highlighted the works of youth, through song and service. The Church of Nativity’s youth choir and the young ladies of the Amity School led songs and, later, carried the donations of food to the altar.

These contributions will be distributed to the American Jewish World Service, Catholic Relief Services, the Our Lady of Refuge pantry, Masbia Flatbush, Firstfriends of New Jersey and NYCares 2014 Coat Drive, conducted through the East Midwood Jewish Center.

Latino, Russian, African-American and Jewish residents all joined together in the holiday spirit, feasting over traditional Thanksgiving cuisine. Many of the residents at the facility had their own children and grandchildren with them at the celebration and participating in the cultural festivities, as they gave thanks for the ability to be with their loved ones during the holiday.

The festivities kicked off with the chef and other employees, dressed as pilgrims, dancing to classical Russian music as they served residents traditional Thanksgiving food, including turkey, stuffing and cranberry sauce. The dining room was filled with a vast number of languages being spoken, including English, Russian, Spanish and a hint of Yiddish.

“One of the things we pride ourselves on here at Shore View is our diverse group of residents and patients,” said Irina Volinksy, activities director for Shore View Nursing and Rehabilitation. “We strive to uphold our value of diversity and events such as this bring our residents from all different backgrounds together, where they not only get to participate in the festivities, but have the opportunity to learn and exchange ideas about each other’s cultures and religions. We are like a family here at Shore View and continue to embrace this feature about our facility.”

Parishes Throughout Diocese turn out to Salute Widely Respected Priest

Joy and thanksgiving were at the forefront as the Rev. Nils Blatz was honored last weekend for his 50 years of service to Camp DeWolfe. This ministry of the Episcopal Diocese of Long Island has experienced great revitalization in recent years as a youth camp and retreat center.

Grace Church-Brooklyn Heights, where Fr. Blatz served as rector for nine years until his 2003 retirement, was well represented, with several parishioners filling tables.

Matthew Tees, executive director of Camp DeWolfe, presented a humorous outline of Blatz’s ministry to parishes and Camp DeWolfe, which began in 1948, when the beloved priest was yet a boy camper.

Rev. Blatz began his adult service to the diocese in 1965 as assistant priest at Trinity Church-Roslyn. Later, after two years of serving a church in Pennsylvania, Trinity-Roslyn called him to be its rector. He served there for 22 years before being called as rector of Grace Church-Brooklyn Heights.

After retiring from Grace Church, Blatz did what started out as a “short-term” part-time ministry at Redeemer Church-Mattituck, “where he just finished 11 years of service,” exclaimed Matthew Tees.

“However, he is a man of many trades,” said Tees. “He was not only able to serve in that ministry, but also able to be an amazing presence here at Camp DeWolfe,” which was formative to him as a child.

Rev. Blatz’s experience at Camp DeWolfe began the year after its 1947 founding. He was a boy camper, then, as a teen, he served on the work crew. Rev. Blatz’s commitment to Camp DeWolfe remained steadfast, as he led retreats with his longtime friend Fr. (later Bishop) Herbert Thompson, who went on to become bishop of the Episcopal Diocese of Southern Ohio. (Thompson died unexpectedly in 2006.)

Rev. Blatz also served as a member of the Camp DeWolfe Board of Managers, then asits treasurer and acting chair, spanning the years of 1990-2012. He then demoted himself to “assistant babysitter” this past summer and is the grandfather of a new camper starting next summer.

“I can’t tell you how overjoyed I am,” Bishop Provenzano said, praising the staff. “Where we are now, and what is happening here, is a resurrection story in the midst of our lives. Every member of the Episcopal Diocese of Long Island needs to be proud of what is happening in this place.”

The bishop continued, “If nothing else happens in the rest of my episcopacy, I will be satisfied with the fact that this place is up and running, and serving the people of the diocese for many years to come.”

“My first real encounter with Nils was at a Camp DeWolfe board meeting … even sometimes, when you get to wear the purple shirt and the pointy hat, there are people who are your elders. And I will honor that forever. And you all have experienced that more than I have,” Bishop Provenzano said.

St. Philip’s Episcopal Church in Dyker Heights will mark the expectant liturgical season of Advent with a Taizé Service and wine-cheese fellowship this week.

This candlelit, contemplative worship is in the tradition of the Taizé ecumenical community in France and includes chanted song, scripture readings and quiet meditation.

St. Ann’s Church parishioner Kristin Lundberg wrote and stars in a play that will be presented at the landmark parish on Friday, Dec. 5.

Lundberg’s play, “Muse,” is a Victorian, Gothic stage production about the woman who made Shakespeare’s “Ophelia” famous. “Muse” is a true story, set during the Industrial Revolution, and follows pre-Raphaelite artist Dante Gabriel Rossetti and his muse and model, Elizabeth Siddal, in their journey as lovers and, eventually, artistic competitors.

“Muse” has enjoyed a recent successful New York run at Theater for the New City and a tour. The 90-minute production about Siddal, the model and paramour to Rossetti, also features Greg Pragel and is directed by Jay Michaels.

Lundberg is the founding director of Shakespeare’s Sister Company, which sponsors the performance.

Friday’s performance starts at 8 p.m. A $10 suggested donation is requested to benefit the company and church. Visit www.shakespearessister.org to learn more