INDIA — Indian Worker Participates in Iron, Steel Scrap Workshop: An Indian worker works at an iron and steel scrap workshop at an industrial area on Reay Road in Mumbai, India, on Monday. Mumbai is also known as the financial capital of India.

VIRGINIA — Dog Leaps During Warm-Up Before Competition: Donna Brown of Mount Airy, Md., practices with her dog Lark in the warm-up pen before taking the floor in the Blue Ridge Dog Training Club’s AKC Dog Agility Trials on Sunday in Kernstown, Va. HONG KONG — Officers Strike Protesters Outside Government Headquarters: Police officers swing at protesters as they try to disperse them outside government headquarters in Hong Kong on Monday. Pro-democracy protesters clashed with police as they tried to surround Hong Kong government headquarters late Sunday, stepping up their movement for genuine democratic reforms after camping out on the city’s streets for more than two months. MASSACHUSETTS — Researchers Observe Robotic Cheetah: In this Oct. 24 photo, researchers stand beside a robotic cheetah on an athletic field at the Massachusetts Institute of Technology (MIT) in Cambridge, Mass. MIT scientists said the robot, modeled after the fastest land animal, may have real-world applications, including for prosthetic legs. PHILADELPHIA — Police Search for Missing College Student: Police marine units use long poles while combing the bottom of the Manayunk Canal in search of missing college student Shane Montgomery early on Sunday in Philadelphia. The college senior had been reported missing after a night out with friends at a crowded Philadelphia bar. Police said 21-year-old Montgomery was home from West Chester University and met up with friends Wednesday night at a crowded bar in the Manayunk neighborhood. 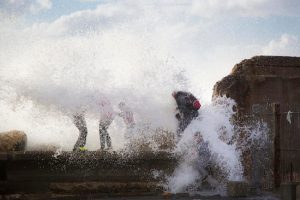