The second New York Eurasian Film Festival – the largest showcase in the U.S. of feature, short, documentary, and animation films from the Eurasian continent – will be held at St. Francis College (Founders Hall) in Brooklyn Heights from Monday, May 20 – Friday, May 24. There will be two shows each evening; the first will begin at 6:30 p.m. and the second at 8:30 p.m. The screenings are free and open to the public.

The Eurasian Film Festival is an organization devoted to promoting great cultural interaction between the United States and Eurasian countries, and the program highlights a selection of films that strongly reflect, revive, newly interpret, or celebrate important cultural heritages. The festival emphasizes the stunning artistic achievements taking place at the crossroads of Eurasia, where the culture and art of Eastern Europe, Asia, Central Asia, Turkey, Poland and the Balkan Republics, are informing and cross-fertilizing one another. The Film Festival program includes films that are screened in the U.S. for the very first time, and many award-winning films worldwide. 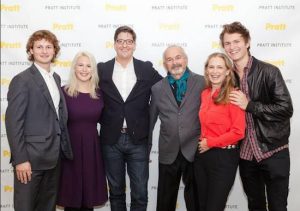 Pratt hosts ‘An Evening with the Elgorts’