The Brooklyn legal community has long been a shining example for diversity, leadership and collegiality in New York State, and this year’s class of Supreme Court nominees is a great example of such excellence.

A total of 12 judges were nominated by the Brooklyn Democratic Party earlier this month including seven Black judges, nine women and four of Hispanic or Caribbean decent.

In that group, Judge Paul was the first-ever Haitian American elected in the state and Judge Frias-Colon was the first Dominican-born judge.

This is nothing new for the borough as it has long helped the state diversify its bench. Out of these 12 nominees, 11 are currently sitting on the bench in lower courts or are acting Supreme Court justices.

Women have also grown increasingly present in the process in recent years. I wrote about it back in 2017 when five women– Hon. Connie Mallafre-Melendez, Hon. Robin Sheares, Hon. Patria Frias-Colon, Sandra Roper, and Ellen Edwards all won borough-wide races and another judge, Hon. Elena Baron, won a Civil Court district seat. Not all of them ran contested elections, but all of them swept away their male counterparts in the primaries.

Women have succeeded in elections just prior to 2017, and since beating male opponents in nearly every contested election since.

Internships within the court system – and especially those with judges – are some of the best opportunities available to high school and college students looking to get a foot in the door. In Brooklyn, there is no shortage of those opportunities.

One judge, the Hon. Joanne Quinones, goes above and beyond taking multiple interns throughout the year and will even have nearly half a dozen during the summer months. It’s her way to give back and help her community by lifting the youth up the way she was.

Judge Quinones was born in Bushwick and realizes how unlikely her path was as she had seen so many others like her struggle. It was one teacher, Quinones explained, who started her down a path that ultimately led to the bench which gives her an appreciation for mentorship and opportunities for children and young adults.

Even the name “Camp Quinones” had come into fruition organically, being an allusion to interns following the judge in the courtroom and even at events. Someone said, ‘hey there goes Camp Quinones’ and the name stuck.

Judge Quinones gives back to her community– literally giving back to her interns every year when she invites them back to the courthouse for the annual summer reunion where she serves food and practically forces everyone to network. After two years in a row of hosting the event virtually on Zoom, the judges were finally able to bring people back together in person this year and a record of nearly 60 attendees showed up. 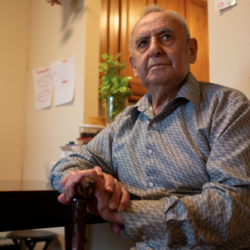 Judges, District Leaders and County Committees: What to Know About Downballot Races New Democratic judicial nominees are a cross-section of Brooklyn