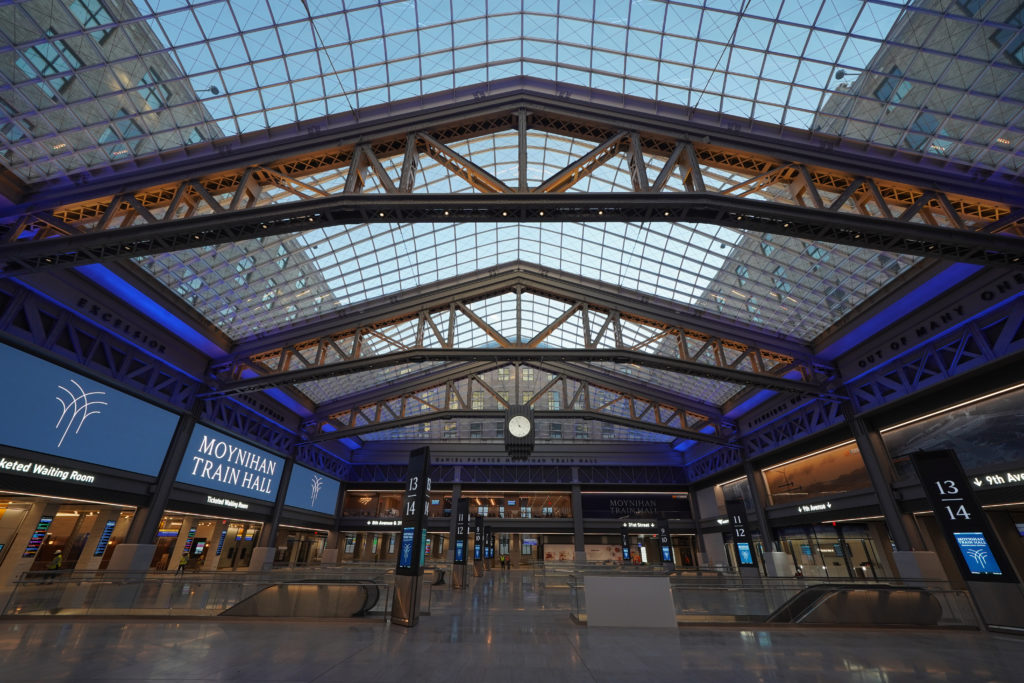 Gov. Andrew Cuomo on Wednesday announced the grand opening of Moynihan Train Hall, a 255,000-square-foot train hall within the historic James A. Farley Building that will be a new gateway into Penn Station.

The facility is slated to go into service on New Year’s Day. Carlo Scissura, president and CEO of the New York Building Congress and former head of the Brooklyn Chamber of Commerce, commented, “Friday is a transformative day in New York City. The highly anticipated opening of the Moynihan Train Hall demonstrates the power of successful public private partnerships to accomplish great infrastructure projects. The Moynihan Train Hall has safely supported workers throughout the pandemic and stimulated the economy, and its opening will increase public transit capacity and accessibility in the city.”

The idea of converting the post office into a train hall was first proposed by the late U.S. Sen. Daniel Patrick Moynihan. Cuomo said, “Sen. Daniel Patrick Moynihan was a man of true vision. He saw the potential in an underutilized post office and knew that if done correctly, this facility could not only give New York the transit hub it has long deserved, but serve as a monument to the public itself.”

It also provides immediate benefits at this critical time while profoundly enhancing the convenience, health, and daily experience of hundreds of thousands of passengers, neighbors, and visitors, according to the Governor’s Office.

Led by Empire State Development (ESD), the $1.6 billion project was accomplished through a public-private partnership between ESD, Vornado Realty Trust, The Related Companies, Skanska, the MTA, the Long Island Rail Road, Amtrak, and the Port Authority of New York and New Jersey. It utilized a design-build approach to streamline construction and expedite completion.

Moynihan Train Hall reshapes the travel experience of Penn Station, the busiest passenger transportation facility in the United States, used by more than 700,000 passengers per day, according to the Governor’s Office.

U.S. Senator Charles Schumer said, “After decades of work, today we pop the New Year’s cork early to celebrate the opening of the gorgeous Moynihan Train Hall — a grand, skylit, modern transit portal for LIRR and Amtrak riders that will leave the Penn Station of the past in the dust. Senator Moynihan recognized [the establishment of such a train hall] as a unique opportunity to both correct a historic mistake — the tragic demolition, a half century ago, of McKim, Mead and White’s original Pennsylvania Station — and to create a beautiful, new, user-friendly public space that New Yorkers and all Americans can once again enjoy and be proud of.”

Congressman Jerrold Nadler (D-Brooklyn-Manhattan) said, “Moynihan Station is a significant addition to our city’s infrastructure and a worthy initiative that helps preserve the legacy of the late Senator Moynihan, who first championed this project. I have long supported funding for this project in Washington, it produces the infrastructure improvements and economic development that New York needs especially as we recover during these tough economic times.”

Congresswoman Carolyn B. Maloney (Upper East Side-Greenpoint-Long Island City) said, “I have long been an advocate for modernized transportation initiatives to propel New York City into the future, and Moynihan Hall is just that.”

The Farley Building was one of the first buildings landmarked under preservation laws established in the wake of the destruction of its sister structure, the original Penn Station. The Farley Building’s 200,000-square-foot stone façade, 700 windows, copper roof and steel trusses are among the many unique details that have been fully restored. A retail post office will continue to operate within the building.