This week’s theme is “Public service organizations: healthcare.” Public service organizations of all kinds comprise a large category of my father’s work in Brooklyn that I haven’t displayed yet. Many of the organizations that you’ll see this week focused on healthcare, including services for those with all manner of special needs. Some services were aimed specifically at children or the elderly. For the most part, these groups relied on extensive fundraising to support their activities.

My father worked for quite a few healthcare agencies, including the Red Cross, the Brooklyn Tuberculosis and Health Association, the United Hospital Fund, the Visiting Nurses Association and others. There were also a number of Jewish-sponsored efforts as well as non-health related services that I’ll come back to in future posts.

Today’s photos show the most common and recognized services provided by two of the organizations my father did work for: the Brooklyn Tuberculosis and Health Association provided countless chest X-rays; and the Red Cross is probably best known for its ongoing blood donation drives. You may recall a lineup of four men, shown on Monday, waiting for their X-rays. Here, in the same dry-cleaner shop, are quite a number of women (and one man) waiting their turn. Tuberculosis has been largely controlled in the developed world since the widespread use of streptomycin and other antibiotics in the late 1940s. But, as is the case with most medications, the antibiotics worked best when the disease was discovered early. So, chest X-ray diagnosis was still important in the late 40s; in fact, it’s increasingly important in our own time as antibiotic resistance has grown, and TB has returned in some areas. The Brooklyn Association and hundreds of other TB-focused groups provided literally millions of X-rays in the first half of the 20th century. Men, women and who? An important group gets their X-rays, December 9, 1946 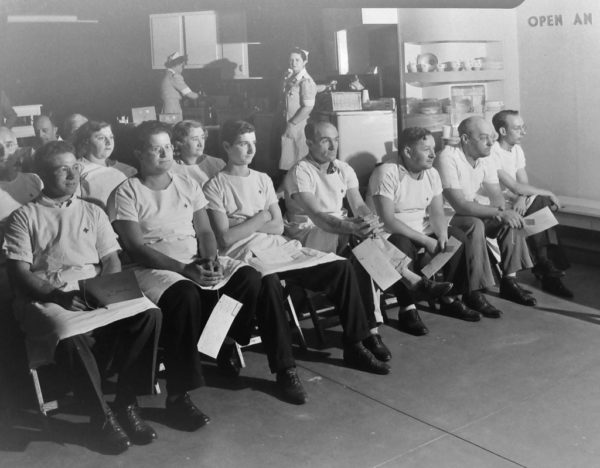 These people are lined up like the previous groups, but as donors (of blood, not money), not as recipients of service. Red Cross outlets did, and still do, run regular blood donation drives at their own sites and in public buildings.

The first two pictures above may have been taken at a Red Cross office. The topmost shot shows the men in the front row looking a little nervous or maybe just laser-focused on the procedure they’re about to undergo. The second shot shows what they were focused on. Finally, the bottom shot shows another lineup of people on cots on their backs, but from a balcony above and with a decidedly non-institutional mural behind them. Where could this be? Another shot in a favorite spot: the Hotel St. George, whose public spaces were often available for community service events.