A walk to Cher’s house from ‘Moonstruck’ 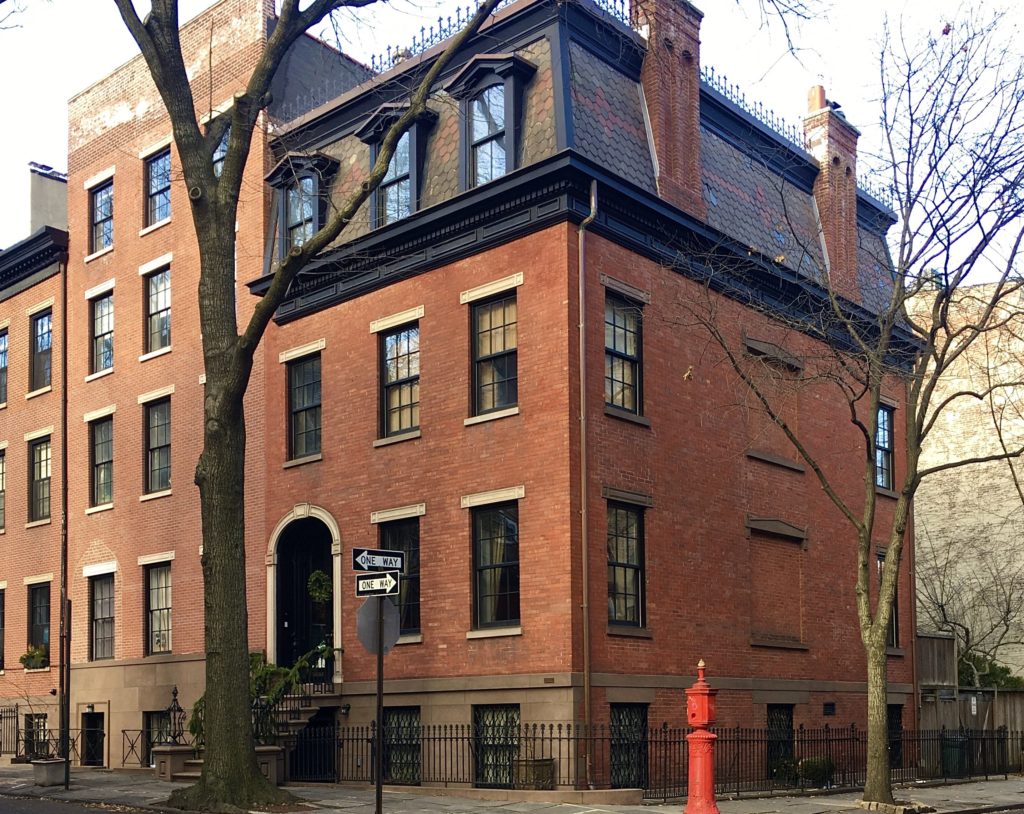 On the corner of Cranberry and Willow streets, you find the house where Cher lived in “Moonstruck.” Photo: Lore Croghan/Brooklyn Eagle
Share this:

Eye on Real Estate: Hey. All of you who are fighting the January doldrums and wishing Valentine’s Day would get here to cheer you up. Did you know that Love Lane is a real street?

It’s in the middle of Brooklyn Heights, in the oldest historic district in all of New York City. What a fine place to take a loved one for a stroll.

Sure, there’s a CVS at the entrance to Love Lane as opposed to some romantic, candle-lit cafe where you can sip champagne together. But the drugstore is situated in a sweet little brick house with shutters on the windows.

And Love Lane leads to College Place, which is one of the prettiest streets in Brooklyn Heights. That’s saying a lot in a neighborhood full of landmarked homes built before the Civil War.

Do you know the way to Love Lane? Let me show you. It’s part of today’s stroll through the north side of Brooklyn Heights. I promise we’ll walk around the rest of the neighborhood on another occasion.

To get to the border of Brooklyn Heights, you can take the 2, 3, 4, 5 or R train to the Borough Hall stop or the A or C train to the High Street/Brooklyn Bridge/Cadman Plaza East stop.

You’ll wind up on the corner of Court and Montague streets, or a couple blocks away, depending on which train line you take.

When you walk down Montague Street, one of the most eye-catching things you’ll see is a pair of century-old bank branches on the corner of Clinton Street. Both of them are city-designated landmarks. Both were constructed in an era when bank designs were invariably grand and regal. One is meant to look like a palace and the other a temple.

Architecture firm York & Sawyer designed the Brooklyn Trust Company Building, which is directly on the corner at 177 Montague St. It is now a Chase Bank branch.

It’s modeled on a palazzo in Verona, which is of course Romeo and Juliet’s hometown while we’re on the subject of Valentine’s Day and Love Lane.

You must take a minute to step inside the neo-Italian Renaissance-style bank. This gives you a reason to stand on its front steps and get a close look at the Instagram-worthy lampposts on either side of the entrance door. The bases of the lamps feature big winged lions and little tortoises.

Then when you step inside, you will find a landmarked interior, a rare thing in Brooklyn. This banking hall has a vaulted ceiling, super-dramatic chandeliers, vast arched windows and an elaborately patterned mosaic floor.

The second bank property, whose address is 181-183 Montague St., is the People’s Trust Company Building. It looks like a Classical temple, with a row of columns outside the front entrance and above them, a triangular pediment with fabulous sculptural figures.

Architecture firm Mowbray & Uffinger designed the neo-Classical building, which was constructed from 1903 to 1906. It is now a Citibank branch.

From here on out, most of the neighborhood falls within the boundaries of the Brooklyn Heights Historic District. Entire blocks are landmarked.

Turn up Clinton Street to the corner of Pierrepont Street, and you’ll find one of Brooklyn Heights’ most dramatic buildings. The Brooklyn Historical Society, designed by architect George Browne Post, was constructed in 1881. The Queen Anne-style brick building’s facade is decorated with terra-cotta busts of famous folk including Shakespeare and Beethoven.

Turn left on Pierrepont Street, which has stately brownstones. There’s an eye-catching Beaux-Arts apartment house at the intersection of Henry Street. Kitty-corner from this apartment house, whose address is 161 Henry St., you’ll find Herman Behr House.

This Romanesque Revival mansion’s address is 82 Pierrepont St. Frank Freeman was the architect. It’s currently used as an apartment building. Over the decades, it has by turns been a hotel, and belonged to a monastery, and reportedly housed a brothel.

Head up Henry Street. And in short order, you’ll be at the entrance to Love Lane. Cupid’s favorite Brooklyn street is one block long. In the middle of it, you turn right onto scenic cul-de-sac College Place.

One side of College Place is lined with painted brick carriage houses with arched garage doors and shutters on the windows.

Head back out onto Love Lane, which exits onto Hicks Street.

The brownstones on Hicks Street are really something. If you’re in the mood to look closely at architectural details, there are Tudor-style doorways on side-by-side homes 131 and 135 Hicks St., Clay Lancaster’s “Old Brooklyn Heights: New York’s First Suburb” says.

This is the book version of building-by-building historical research that Lancaster did, which neighborhood residents used in their successful efforts to get the city to create the Brooklyn Heights Historic District in 1965.

In 2014, when Steven Spielberg was filming “Bridge of Spies,” he temporarily turned the storefront where the coffee shop is now located into a 1950s dress shop. As a crowd of Brooklyn Heights residents watched, Spielberg used an enormous machine to pour simulated rain on this intersection — and actor Tom Hanks.

Further up Hicks Street, take a quick detour onto Orange Street to see Plymouth Church, which was founded in 1847. Eminent abolitionist Henry Ward Beecher was the preacher there. His statue is on the church lawn.

When you’re back on Hicks Street, keep walking. On the corner of Cranberry Street you’ll find a beautiful house constructed in 1829. The corner storefront is home to Jack the Horse Tavern, whose address is 66 Hicks St.

Beloved wood-frame houses are sprinkled here and there on these blocks on the north end of Brooklyn Heights. Turn left on Middagh Street, and you’ll find them on both sides of the road as you head towards the corner of Willow Street.

On that corner, you’ll find 24 Middagh St. This Federal-style gray clapboard home has crimson-colored window shutters and a backyard with a carriage house.

This eye-catching abode is nicknamed “the Queen of Brooklyn Heights Houses.” Accounts of its age differ. Some people think it has been around since 1790. Lancaster’s book says it was constructed in 1829.

When you face the opposite direction on this Middagh Street corner, you’re overlooking the BQE. And beyond the highway, you see the top floors of Panorama, the office complex at 25 Columbia Heights that was formerly the world headquarters of the Jehovah’s Witnesses.

Remember the movie “Moonstruck,” which won Cher an Oscar for Best Actress?

Her house in the film is on another Willow Street corner, at 19 Cranberry St. The brick house has a small plaque on the front of it that gives the year of its construction as 1833.

Literature lovers appreciate Willow Street because Truman Capote lived on it when he worked on “Breakfast at Tiffany’s” and “In Cold Blood.”

The house at 70 Willow St., where the author lived in a basement apartment from 1955 to 1965, belonged to Broadway set designer and American Ballet Theatre co-director Oliver Smith.

Visitor guides like the one on NYC & Company’s website say the Greek Revival-style house’s facade is yellow. But when the current owners renovated it a few years ago, the city Landmarks Preservation Commission gave them permission to remove the paint from the facade.

The unpainted brick, which is what you now see, is red.

Continue down Willow Street. You’ll soon pass a fabulous 1920s hotel that was called The Towers. The top-paid Brooklyn Dodgers stayed there back when they were our borough’s baseball team.

The property, whose address is 21 Clark St., later belonged to the Jehovah’s Witnesses. It’s now being turned into a rental building for seniors called The Watermark at Brooklyn Heights, with a mix of independent-living units, assisted-living units and memory-care units for residents with dementia or Alzheimer’s disease.

Further down Willow Street, there’s a home where playwright Arthur Miller lived. The Federal-style rowhouse at 155 Willow St. was constructed in the 1820s.

At the corner of Pierrepont Street, turn right. In just a minute, you’ll reach an entrance to the Brooklyn Heights Promenade.

The fate of the landmarked walkway hangs in limbo while a panel studies ways to repair the BQE beneath it. My colleague Mary Frost is keeping everybody up to speed on this complex topic.

For a moment, set the subject of the BQE aside and simply take in the views that the famous esplanade offers.

There’s the World Trade Center with other lower Manhattan skyscrapers. In the near distance, a new sound-attenuating berm is taking shape at Brooklyn Bridge Park. To the north, the Brooklyn Bridge stretches across the East River.

On the promenade’s inland side, the backs of Columbia Heights brownstones brighten up the scenery.

If you’ve taken your walk late enough in the afternoon, you’ll be right on time to see the sunset, which is always a thing of beauty. If it’s too early, you could go get a bite to eat on Montague Street.