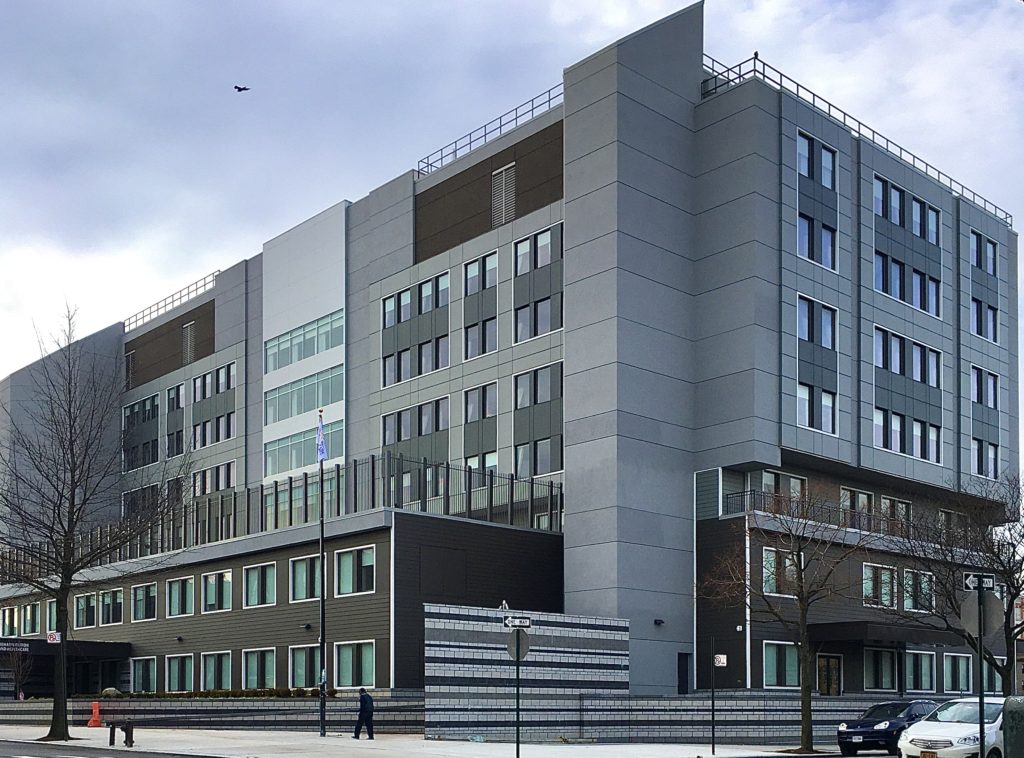 A hospital that was a vital part of the Crown Heights community from its 1882 debut until its 2005 closing has been transformed into Brooklyn Center, a skilled nursing facility that’s expected to open early next year.

The owner of the property at 170 Buffalo Ave., Centers Health Care, reconstructed St. Mary’s Hospital after dismantling just about everything but the building’s foundations and elevator shafts.

That building had sat vacant for more than a decade. It was constructed in the 1970s, replacing the Second Empire-style building that originally housed St. Mary’s.

Centers Health Care’s $90 million reconstruction project has brought forth a 281-bed nursing home on the site bounded by St. Marks and Buffalo avenues and Prospect Place. The company showed off the seven-floor, 280,000-square-foot facility to health care professionals at a Dec. 5 event to which reporters were also invited.

“We have put a lot of blood, sweat and tears into designing it,” Centers Health Care CEO Kenny Rozenberg told the Brooklyn Eagle at the event. “Our company has always prided itself on being on the cutting edge of delivering quality health care.”

From Midwood to Crown Heights

His company built the new nursing home to replace its 215-bed facility at 1455 Coney Island Ave. in Midwood.

There’s “a small chance” the company will repurpose the site as a health care facility, he said.

At this moment, there are 165 patients at the Midwood nursing home, Centers Health Care’s Chief Sales Officer Steve Carr told the Eagle.

Starting in August, Centers Health Care slowed down new-patient admissions at the Midwood facility by not offering available beds to hospitals who asked for places to send patients. Some patients left the Midwood nursing home because their health improved enough for them to move to assisted living facilities.

Centers Health Care expects most of the patients who are at the Midwood nursing home when it closes will choose to move to the Crown Heights location, Carr said.

Centers Health Care can’t give the patients official notices about the Midwood location’s closure until it opens the Crown Heights facility. Carr said the company would like to move the patients out within 30 days after issuing the notices. But if the state Department of Health wants the advance-notice period to be longer than that, it will be.

The company can’t open its Crown Heights nursing home until it has state licenses and a final certificate of occupancy for the building, which Carr anticipates will be in early 2020.

The history of St. Mary’s

St. Mary’s Hospital was founded by Bishop John Loughlin, who presided over the Diocese of Brooklyn from its inception in the 1850s until his death in 1891.

“I expect that a vast amount of good will be accomplished through this institution, and that many will go forth from this place blessing the day that they entered its walls,” Loughlin said at the opening ceremonies of St. Mary’s Hospital, the Brooklyn Daily Eagle reported on Dec. 18, 1882.

At the time of its closing in 2005, St. Mary’s was the last Catholic hospital in Brooklyn. It was controlled by St. Vincent’s Catholic Medical Centers, which went bankrupt.

Spacious rooms and an indoor track

The nursing home that now stands in St. Mary’s place is a state-of-the-art facility that will have full-time physician services and 24/7 nursing services.

Semi-private rooms, which are for two patients, have walls extending most of the way through the middle of them with space left over for the patients to access their bathrooms. This layout offers patients more privacy than a traditional semi-private room setup, with side-by-side beds separated by a curtain.

The patients’ bathrooms have showers that are wide enough for wheelchairs to roll into, in accordance with Americans with Disabilities Act guidelines.

A unit of Brooklyn Center will be Southeast Asian-themed, with staffers who speak Chinese, Arabic, Urdu and Bengali.

The therapy suite also has rooms set up as an apartment for “activities of daily living” treatments, where occupational therapists help patients practice skills like cooking to prepare them for leaving the nursing home.

The view from on high

Because most of the buildings in the surrounding area are low-rise or mid-rise, many patient rooms have views of the Manhattan skyline, from the World Trade Center in Lower Manhattan to the Empire State Building in Midtown and beyond.

Patient rooms on the top floors of the St. Marks Avenue side of Brooklyn Center have views of Weeksville Heritage Center, which is located right across the street.

This museum has a row of 19th-century houses that are treasured remnants of the Weeksville community, which was built by free, landowning African-American in the decades before the Civil War.