Assassins and espionage: A history of spies in Brooklyn

A new book tells the story of some of New York City's sneakiest residents. 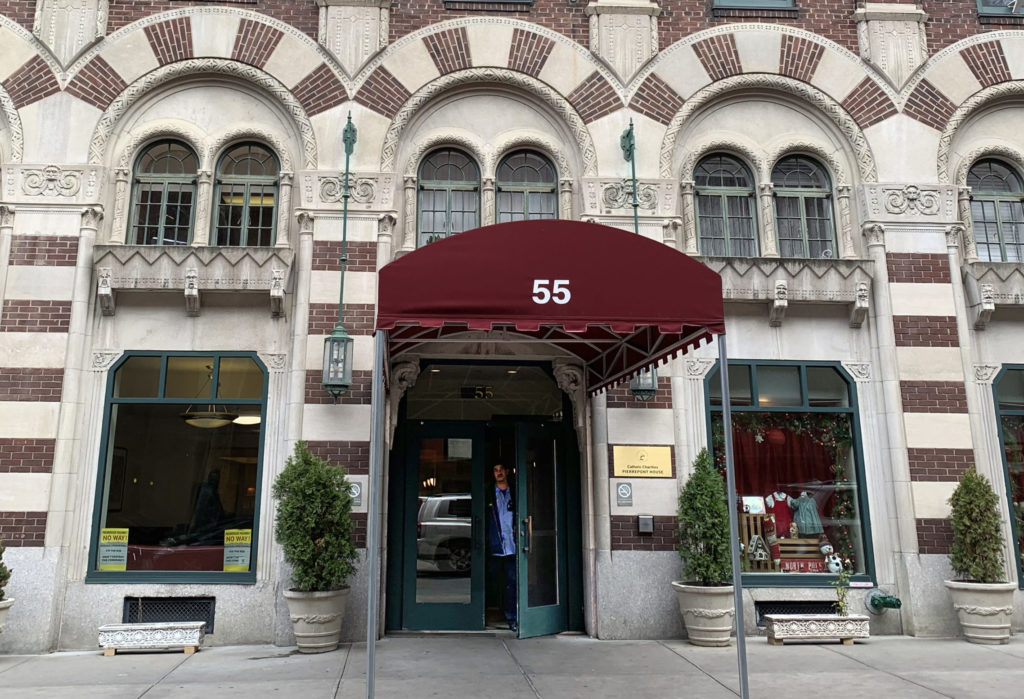 Today 55 Pierrepont St. is a residence for seniors. But in 1940s Brooklyn, this was the Hotel Pierrepont, temporary home of the assassin who changed world history. Photo: Mary Frost/Brooklyn Eagle
Share this:

In the hotels, bars and shops we walk by unsuspectingly every day, foreign spies have long used New York City for clandestine operations.

It’s a tradition that continues to this day, according to the soon-to-be-released “Spy Sites of New York City: A Guide to the Region’s Secret History,” by intelligence historian H. Keith Melton and Robert Wallace, former director of the CIA’s Office of Technical Service.

It turns out that Brooklyn has been the setting for some of the most dramatic moments of this hush-hush history — from meetings in Brooklyn Heights where plans were made to kill Russia’s exiled Bolshevik leader Leon Trotsky, to the Blind Sheikh’s operation to bomb the World Trade Center.

In their intriguing guide filled with more than 230 true stories, plus maps and photos, the authors unveil our city’s sites of espionage from the Revolutionary War to the 21st century.

The assassin of Pierrepont Street

On shady Pierrepont Street in Brooklyn Heights, the Pierrepont House for the Elderly, overseen by Catholic Charities, provides affordable housing for low-income seniors. Moms and nannies push their strollers by 55 Pierrepont St. on their way to the playground. Sometimes they’ll pop into the Brooklyn Women’s Exchange there, founded in 1854.

The building went through an rowdy period in the early ’70s, old-timers recall. Neighbors complained about drugs, naked prostitutes hanging out of windows and a wild club for gay men — with few age restrictions.

But in the 1940s and ’50s, the 16-story building was the Hotel Pierrepont, with a solarium, gym and the kind of cocktail lounge where Judy Garland might meet Truman Capote at the bar.

The hotel was also the temporary home of the assassin who stabbed Russia’s exiled Bolshevik leader Leon Trotsky to death with an ice pick in 1940.

It was at the Hotel Pierrepont where Ramón Mercader, an agent of Russia’s repressive secret police, NKVD, planned the attack that would kill Trotsky. Mercader was under the orders of Joseph Stalin, who wanted Trotsky out of the way.

Mercader operated under the aliases Jacques Mornard and Frank Jacson. His mother (with the actual code name of “Mother”) was the NKVD’s operational controller for the plan.

As the writers and artists of Bohemian Brooklyn Heights ate, drank and gossiped downstairs, Mercader, Mother and Gaik Ovakimian met in his room upstairs and worked out the details of the scheme to kill Trotsky. It was to take place two months hence in Mexico City.

The elaborate operation worked as planned. In Mexico, Mercader killed Trotsky after a cunning operation to gain access to the heavily guarded exile.

Despite an elaborate plot by the Russians to free him, Mercader ended up serving 20 years in a Mexican prison. Upon his release, he resettled to the USSR in 1960, where he was honored as a hero of the Soviet Union.

The ice ax is on display at the International Spy Museum in Washington, D.C.

The ‘honey trap’ on Livingston Street

How did Mercader meet Trotsky and get close enough to kill him in Mexico?

With the help of a sweet but too-trusting woman he met in Brooklyn Heights.

Sylvia Ageloff, a social worker and graduate student who lived at 50 Livingston St., didn’t have much of a social life. But she had one asset of great importance to Mercader. Her sister Ruth had served as a secretary to Trotsky in Mexico a year earlier, and was close to Trotsky and his wife.

Mercader, under his alias as Jacques Mornard, played the role of the debonair son of a diplomat. The well-engineered plot had him “accidentally” meeting Ageloff at a political event in Europe and, over time, seducing her.

Ageloff took the bait. The couple traveled romantically throughout Europe together for months, living the dream, before returning to Brooklyn. Afterward, they traveled to Mexico, where Mercader, over the course of three months, leveraged their relationship to weasel his way into the trust of Trotsky’s bodyguards.

On his 10th visit to Trotsky, alone in a room with him, Mercader smashed him over the head with the ice ax. Trotsky “let out a terrible scream” and the guards ran in, overwhelming Mercader.

The police suspected Ageloff was in on the plot. But after lengthy questioning they decided she was just a naïve dupe, and she returned, heartbroken, to Livingston Street. She would never marry.

On Aug. 21, 1940, the Brooklyn Eagle wrote, “She was said to have wept when police questioned her and sobbed, ‘If Trotsky dies I am going to kill myself, because I am a great admirer of him.’”

The master spy of Fulton Street

Legendary Russian spy Rudolf Abel maintained a studio at the former Ovington Building at 252 Fulton Street (now Cadman Plaza West) near Clark Street in Brooklyn Heights, in a section that was redeveloped in the 1960s.

The mild-mannered and always helpful Abel (using the alias Emil Goldfus) spoke nearly flawless Polish, German and English, and was a talented painter, photographer and jazz musician. Often frequenting the iconic, smoky jazz clubs of the day, Abel fit right in with the Heights’ artists and writers, like his friend Jules Feiffer, the noted cartoonist.

But more than anything else, Abel excelled at spy craft. He hollowed out jewelry, pencils and tools for concealment purposes. He carried out espionage across the city, with dead drops in lampposts, in Prospect Park, on Broadway.

Abel was brought down by his “undisciplined, hard-drinking” assistant Reino Hayhanen in 1953. Hayhanen, when drunk, had mistakenly spent a hollowed out nickel containing microfilm containing a coded message. The nickel ended up in the hands of a young Brooklyn Eagle newsboy, James Bozart. When Bozart accidentally dropped the coin it split apart, revealing the microfilm. Cops turned the coin over to the FBI.

It was not until Hayhanen defected that the FBI put it all together and arrested Abel. Agents found microfilm, tools and a short-wave radio set in Abel’s studio. His Brooklyn friends refused to believe he was a Russian spy. He was sentenced to 30 years in prison — but five years later was swapped for downed American U-2 pilot Francis Gary Powers.

The story of this dramatic exchange was the topic of the recent movie Bridge of Spies. The lawyer who represented Abel, James Donovan, was played by Tom Hanks. The real Donovan lived at 35 Prospect Park West. He was president of Pratt Institute from 1968 until his death in 1970 at the age of 53.

“Spy Sites of New York City: A Guide to the Region’s Secret History,” published by Georgetown University Press, will be available  Feb. 3, 2020.