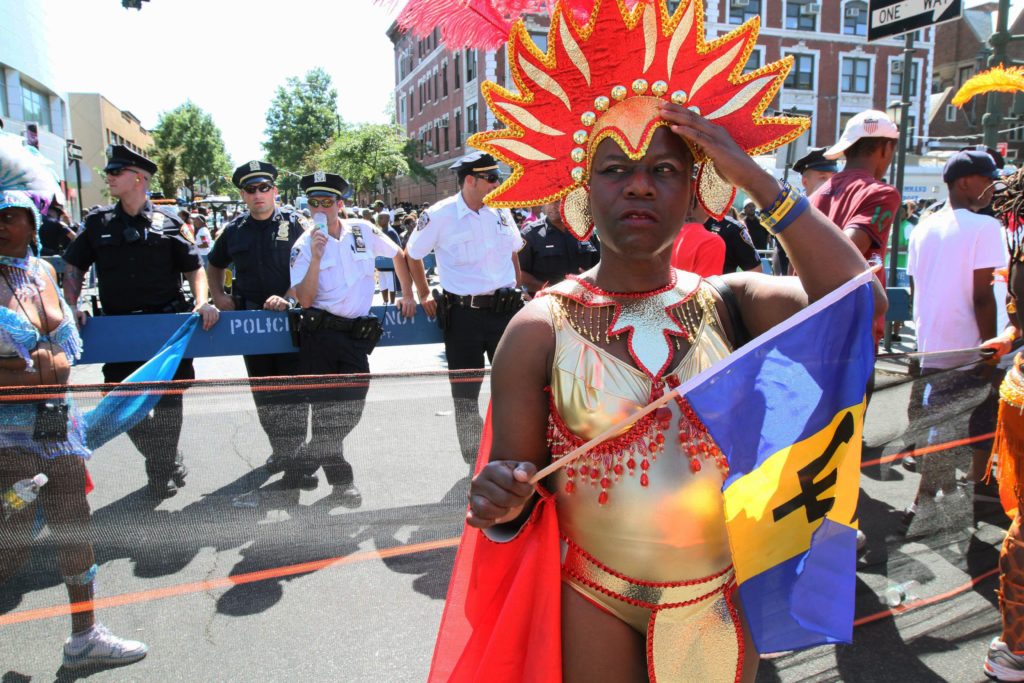 Police stand along the route of the West Indian Day Parade. AP Photo/Tina Fineberg
Share this:

The 2019 West Indian Day Parade and the pre-dawn party known as J’Ouvert, held annually on Labor Day, will be under the watchful eye of thousands of police officers, 300 floodlights and about 60 cameras along the two-mile parade route in Crown Heights.

“There will literally be a cop everywhere doing what they do best: keeping neighborhoods safe,” said Chief of Department Terence Monahan at a press conference on Wednesday. “This is the largest detail we’ve put out all year.”

Police will shut down the route the night before — on Sept. 1 — using NYPD blocker cars, barriers and city sanitation sand trucks to secure the perimeter, which will include large swaths of Parkside Avenue, Empire Boulevard, Flatbush Avenue, Nostrand Avenue and Eastern Parkway as well as smaller street closures.

J’Ouvert itself will be controlled by 13 secure access points where uniformed personnel will screen for prohibited items such as weapons, alcohol, backpacks and large bags, according to police officials.

The pre-dawn celebration will start at 6 a.m. (changed from the original 4 a.m.) and last until 11 a.m. Attendees can start lining up as early as 2 a.m. for access. The event will lead into the official parade that starts at noon on Sept. 2.

For the second year in a row, police will work alongside “violence interrupters,” local residents and groups that aim to stop gang and community violence by intervening ahead of potential turf wars. This year, more than 100 members including “The God Squad” and GMACC (Gangstas Making Astronomical Community Changes Inc.) will participate, according to the NYPD’s announcement.

“The God Squad will interact with community with dignity and decorum, maintaining a positive presence, and providing appropriate faith-based services that will promote, and ultimately produce, civility, order and a non-violent atmosphere,” said Pastor Gil Monrose, president of the 67th Clergy Council a.k.a “The God Squad.”

Response teams from the Emergency Service Unit, Strategic Response Group, Critical Response Command and teams of officers on bicycles will be staged in and around the route for added support.

“If you encounter an issue or see something suspicious — tell a cop,” Monahan said at the press conference.

The announcement of safety precautions follows last year’s added enforcement effort in response to a slew of gun shootings and stabbings came to mar the annual event. There were no major incidents last year.

The initial call for safety precautions was jump-started by the 2015 fatal shooting of then Gov. Andrew Cuomo aide Carey Gabay, who reportedly was caught in the middle of gang crossfire.

That was followed by the double slaying of two individuals, 22-year-old Tiarah Poyau and 17-year-old Tyreke Borel, who were shot during a neighborhood cookout. At least four people were shot and two stabbed in 2017. In 2018 no one died, but an 18-year-old was shot (non-fatally) in the hip after the parade.

The West Indian American Day Parade Association (WIADCA), which organizes the annual festival, did not comment at publication time. They stated that they were not briefed of the security measures at the time of publication.