Ask a historian: Where were Brooklyn’s battle sites during the Revolutionary War? 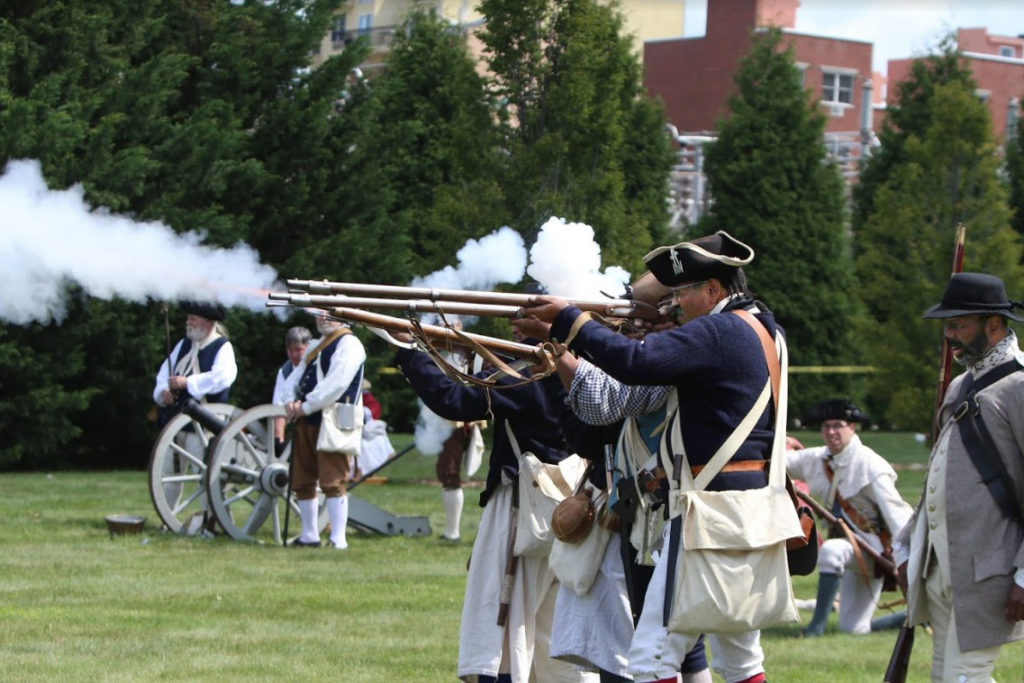 A Battle of Brooklyn reenactment. Eagle file photo by Andy Katz
Share this:

John from Fort Greene asks: “Which battles of the American Revolution were fought around Fort Greene and the Brooklyn Navy Yard?”

He had expected the British to attack Manhattan, so his troops were deployed there. Instead, the invasion came from Staten Island with British troops landing at Gravesend. British Gen. Sir William Howe wanted to secure Long Island first.

As soon as Washington realized Howe’s move, he moved into his Command Post at the Cornell House (at today’s Montague Street and the promenade). Gen. Charles Henry Lee had created the defense of Brooklyn with its eight forts. On Brooklyn Heights was Fort Stirling (or Fort Half Moon) at Pierrepont, Hicks, Clark and Columbia streets, with artillery controlling ships on the East River. To the east lay Fort Putnam, named for the engineer who built it, Col. Rufus Putnam, cousin to Gen. Israel Putnam. This was a star-shaped battery with six cannon.

Related: Battle of Brooklyn 2019: What to do, where to go

Fort Greene, at today’s State and Schermerhorn streets, was named after Gen. Nathanael Greene in command of the Brooklyn military. Greene planned the Battle of Brooklyn. (Today’s Fort Greene Park replaced Fort Putnam.) Cobble Hill Fort, at today’s Atlantic and Court streets, had three guns and the nickname of “Corkscrew Fort” and “Fort Spiral” because of the twisting road leading up to it.

So many forts; so many names.

Fort Box, named for Major Daniel Box, manned with four guns, was in today’s Carroll Park. In 1776, it stood on Bergen’s Hill, on the corner of today’s Bond and Pacific streets. Later, it was renamed Fort Boerum. Fort Defiance, with its battery of guns, defended Red Hook from Dwight and Beard streets. So — most of northern Brooklyn was heavily defended. It just happened that the war didn’t go that way.

Most of the Battle of Brooklyn — aka The Battle of Long Island — was bravely fought along Shore Road, the shores of Gowanus Creek, off Flatbush Road and Jamaica Pass in Prospect Park. The British attack on Narrows Fort captured the 200-man redoubt. In 1826, it was renamed Fort Hamilton.

Only after the defeat of the rebel Americans was northern “Brookland” involved. In a fierce battle at the Vechte-Cortelyou house by the Gowanus, (today’s Old Stone House in Park Slope) Gens. John Sullivan and William Alexander (Lord Stirling) were captured.

On Aug. 29 and 30, attacks on Forts Greene and Putnam convinced Washington to call a Council of War at the Cornell House. There, the military command voted to retreat across the East River to Manhattan from the later Fulton Landing. Under the noses of Adm. Lord Richard Howe, nicknamed “Black Dick” and the brother of Gen. William Howe, 9,500 Americans were evacuated. Without much foresight, Parliament honored both Howe brothers.

Fort Greene, during the Revolution, represented another aspect of the war. It bordered on Wallabout Bay, home of the Navy Yard. The American Revolution was not a pretty war. Prisoners were executed. Weapons were crude, and bayonets saved gunshot. Supplies, including medicines, were not available. The British occupied Brooklyn from 1776-1783.

When rebels were captured, they were piled onto hulks of damaged ships moored in the bay, left to die through neglect or starvation. More than 11,000 prisoners died in this bay, their bodies washing up on the shore. Walt Whitman campaigned to give them an honored burial in Fort Greene Park. So, while no major battle was fought at the Navy Yard, the Martyrs’ Monument in the park remembers the bodies left there.

An excellent book, “The Battle of Brooklyn, 1776,” by John J. Gallagher, details each of the conflicts with military precision, including weaponry and battle plans. (Gallagher was a former member of U.S. Military Intelligence.)

A footnote to the Battle of Brooklyn: Gen. “Gentleman Johnny” Burgoyne, whose defeat at Saratoga ended the war, wrote a play named “The Battle of Brooklyn.” A slight drawing-room comedy, it was reproduced in miniature at a recent exhibit at The New-York Historical Society’s tribute to Brooklyn’s role in the war