LISTEN: Is NYC prepared for another Superstorm Sandy? 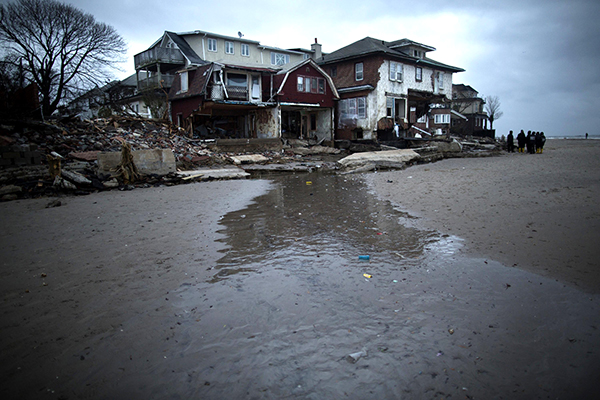 “From underneath the door and then underneath my walls, water just came flooding in,” Bonani told Brooklyn This Week. “Then water started coming out of my closet as well. There was brown stuff all over the floor. I’m assuming it was sewage.”

The likely culprit behind the flooding was combined sewer overflow, a result of the city’s antiquated sewer system, according to Eric Goldstein, environment director of the Natural Resources Defense Council in New York City.

“The city, with 570 miles of coastline, still remains exceptionally vulnerable to storms and other impacts from the climate change crisis,” Goldstein said. “Every time it rains, the volume of sewage going through those pipes is combined with maybe 10 or 20 times that amount of water from rainwater. And so sewage plants are overwhelmed.”

The federal government allocated $14.7 billion to help rebuilding and resiliency efforts in the city post-Sandy. City Comptroller Scott Stringer’s office, however, released a report stating that only 54 percent of that money has been used.

Jainey Bavishi, the director of the Mayor’s Office of Resiliency, which was formed after Sandy, said that the city is better prepared now than when the storm hit.

“We are absolutely safer than we were during Hurricane Sandy,” Bavishi said. “We have implemented flood protection measures in over 40 sites across the city. We have spent over a billion dollars hardening energy infrastructure and even more money hardening critical infrastructure like wastewater treatment plants.”

But Councilmember Mark Treyger, who represents parts of the waterfront in southern Brooklyn, thinks otherwise.

“I am known to be very candid and I will continue to be very candid. We are better informed, but we are not fully better prepared,” Treyger said, adding: “We’ve gotten a better sense of our vulnerabilities in the coastal communities. But as far as stronger and better protection, we have a long way to go.”

Despite being hit hard by Superstorm Sandy, southern Brooklyn was not included in initial U.S. Army Corps studies regarding waterfront resiliency. Treyger, alongside U.S. Representative Hakeem Jeffries, pushed for an appropriate regional report. But it’s still just a study and won’t be completed until 2022.