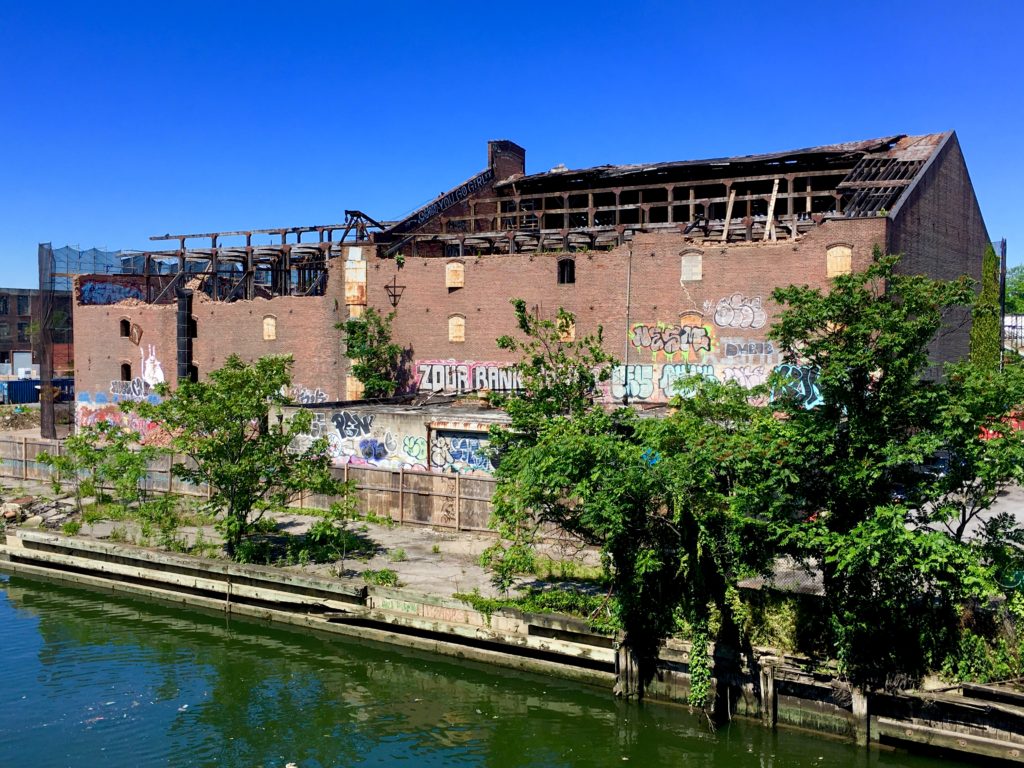 Demolition has started up again at the S.W. Bowne Grain Storehouse, a historic Red Hook industrial building that activists have been trying to save.

After a hiatus of more than two months because of a Stop Work Order issued by the city Buildings Department, a demolition crew is back on the job at the 1880s building.

The storehouse, located at 595 Smith St., is right on the banks of the Gowanus Canal.

Workers on Monday were placing planks onto scaffolding outside the wall perpendicular to the canal-facing side of the building. On the side that faces the canal, the tear-down has progressed dramatically.

The entire roof has been removed from the four-story brick-and-timber warehouse, owned by the Chetrit Group. In May, while the Stop Work Order was still in effect, there were roof beams on the north end of the building.

A significant chunk of the facade on the south side is gone now.

The roof on the south end of the building was damaged in a two-alarm fire in June 2018. In March, an FDNY spokesperson told the Brooklyn Eagle it was an “incendiary fire” and was “deliberately set.”

A spokesperson told the Eagle on Monday that the FDNY’s investigation is ongoing.

‘The city’s industrial heritage is in jeopardy’

An agency spokesperson told the Eagle that on May 9, an inspection found that the “violating conditions” on the property had been corrected. These included expired disability insurance and missing guardrails on the building’s second and third floors, the spokesperson said.

The May 9 inspection led the Buildings Department to decide “the site was in full compliance with all safety regulations,” the spokesperson said.

The Chetrit Group initially obtained the demolition permit for the S.W. Bowne Grain Storehouse in February — while preservation advocates were campaigning to get the building onto the city Landmarks Preservation Commission’s calendar to consider for landmark designation.

The activists are dismayed that demolition is moving forward once again.

“The city’s industrial heritage is in jeopardy,” Linda Mariano, co-founder of Friends and Residents Of Greater Gowanus, told the Eagle.

“The industrial buildings are extremely vulnerable to the greedy and corrupt developers,” she said.

Mariano predicted that the proposed rezoning of the Gowanus “will clear the way for many more industrial buildings for demolition.”

According to city Finance Department records, the Chetrit Group has owned the S.W. Bowne Grain Storehouse since 2007, when it purchased the building in a $14.5 million package of properties.

As the Eagle previously reported, City Councilmember Carlos Menchaca revealed in March that during his first term in office, the Chetrit Group showed him development plans for residential towers at 595 Smith St. The real estate firm has not spoken publicly about its plans for the property.

The Eagle asked the development firm for details about what it plans to construct on the site but did not receive a response by deadline.

“We’re appalled that this owner, who made no secret of their yearslong desire to raze this historic building, is being rewarded for what is at best demolition by neglect,” Historic Districts Council Executive Director Simeon Bankoff told the Eagle.

“We’re appalled that despite the strong advocacy of the community and its elected officials, the city is permitting this to happen without much more resistance than token inconvenience,” he said.

Bankoff’s organization is a member of the Gowanus Landmarking Coalition, a chief force in the efforts to save the S.W. Bowne Grain Storehouse.

An icon that encapsulates the Gowanus Canal’s industrial history

It “encapsulates the canal’s centuries of industrial and commercial history in a clear, legible fashion” — just like the Empire Stores complex does in DUMBO, he said.

The S.W. Bowne Grain Storehouse should have been landmarked years ago, Bankoff said.

At the very least, he added, “these owners [should] be compelled to give back to the city — in return for what they now have permission to destroy — through funds to prevent this kind of loss from happening again and design restrictions to ensure that all remembrance of why this area was so important to the development of Brooklyn is not lost forever.”