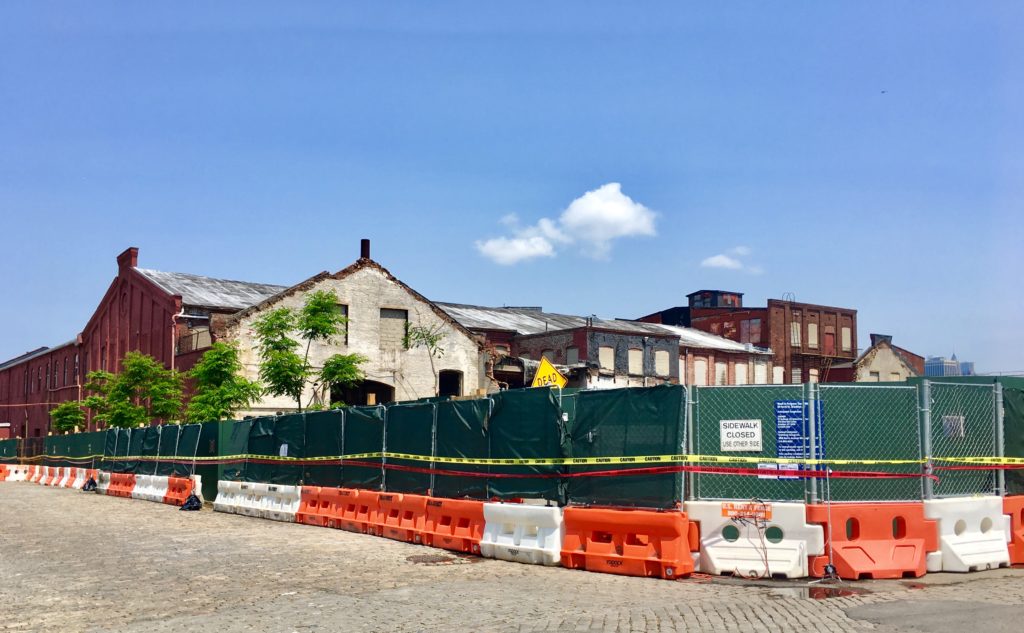 On Friday, demolition halted at the Lidgerwood Building. The missing corner of the building was torn down on Thursday. Eagle photo by Lore Croghan
Share this:

UPS stopped tearing down a section of Red Hook’s historic Lidgerwood Building that’s dear to preservationists’ hearts on Friday following the intervention of a Brooklyn politician.

A high-level executive at the delivery-service giant — which has already demolished part of the iconic Valentino Park-facing side of the 1880s foundry — told U.S. Rep. Nydia Velazquez the company had stopped bulldozing the rest of that section of the building.

UPS did not do so before starting demolition of the historic building on the Friday of Memorial Day weekend, despite community activists’ repeated pleas for a chance to discuss the preservation of the Lidgerwood Building’s park-facing, south facade.

The two politicians released their letter to the media on Friday without additional comment.

On Friday, the Brooklyn Eagle visited the site at the corner of Coffey and Ferris streets. Bulldozers were clearing debris on the site. But they did not touch the walls of the park-facing facade that remain standing after its partial demolition.

The Eagle tried to ask workers at the site about UPS’s decision to leave the Lidgerwood Building’s remaining south facade intact.

Through a security guard, the workers said they didn’t have time to be interviewed.

On May 24, UPS Director of State Government Affairs Alex Carrion informed Community Board 6 that an engineering review of the Lidgerwood Building “identified structural instability and significant compromise of the roof” and therefore “the most appropriate and safest means of abating the asbestos was to take down the entire building,” the Eagle previously reported.

Lane outranks Carrion. She is in charge of UPS’s government affairs in the more than 220 countries and territories where the company does business, her online bio says.

“If [the] structural integrity of this building — which has stood for a century and a half — is at issue, we suggest an engineer could sure-up the walls in question with steel I-beams and other techniques, which is a common construction practice,” they wrote.

UPS ‘has the whole block to work with’

The politicians said in their letter that Councilmember Menchaca’s office had been meeting with officials from UPS before demolition started and “was led to believe that UPS was looking into preserving part of the building the community most cared about, which it demanded by petition.”

In recent days, though, “it became clear that UPS never fully analyzed the possibility of preserving the south facade, despite the Councilman’s specific requests,” the letter noted.

In their letter, Velazquez and Menchaca urged UPS “to respect the history and memory of the building” by preserving the facade that faces Valentino Park and constructing the wall of UPS’s new facility behind that facade.

“Since UPS has the whole block to work with, this should not greatly impinge on the usable space,” they wrote.

“While your team claims to have come up with the best and safest option [for demolition], we suggest that it was rather the expedient option, not the best, certainly not by the community,” the politicians wrote.

The Eagle reached out to UPS for comment on this latest turn of events at the Lidgerwood Building.

In response, UPS spokesperson Glenn Zaccara said, “UPS disagrees with several of the characterizations and assertions made in the Congresswoman’s letter. We will continue to discuss this matter with her office.”