Floating museums and 19th-century storehouses: The Red Hook I cherish 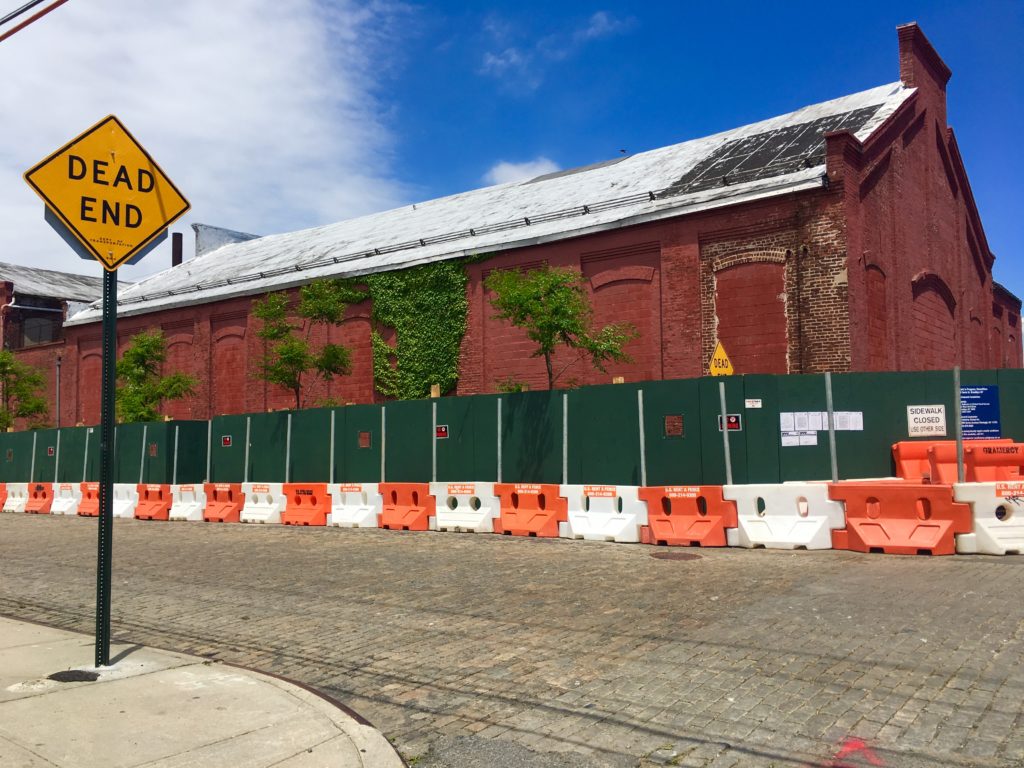 This could be your last chance to see the Lidgerwood Building. Take a good, long look.

On the Friday of Memorial Day weekend, when many Brooklyn residents were headed out of town, UPS started tearing down the former foundry at 202 Coffey St.

The package-delivery giant decided to bulldoze the 1880s red-painted brick factory without speaking to community activists who wanted to discuss ways to save the building facade closest to Louis Valentino Jr. Park and Pier.

The maritime machinery that Lidgerwood Manufacturing Company made was used in the construction of the Panama Canal and the Croton Falls Reservoir’s main dam. In recent years, TV shows and movies were made inside its walls.

I took these photos the day after the demolition began of the parts of the building that were still standing.

Even with a construction fence surrounding it, the Lidgerwood Building looked beautiful from the corner of Coffey and Ferris streets.

When framed by flowers in Valentino Park, the foundry seemed serene and untouchable. That illusion was comforting, if only for a moment.

I also took snapshots of the rubble and gaping walls on the north side of the Lidgerwood Building. But I can’t bring myself to include them in this column. Other Brooklyn Eagle stories are peppered with my demolition pictures. Oy vey.

The weather-beaten peninsula is weighing so heavily on my mind because of the Lidgerwood Building that it’s hard to focus on other neighborhoods. As a momentary diversion, let me show you some of the eye-catching things you can find in Red Hook.

I cherish Valentino Park, which is named for a heroic Brooklyn firefighter who died too young. You can see the Statue of Liberty from the pier.

I cherish the fact that there’s still lots of industry in Red Hook — and lots of 19th-century industrial real estate.

I cherish the presence of magnificent cruise ships like the Queen Mary 2 that make Red Hook a port of call. You can spot them from a couple blocks away.

I love that there are not one, but two floating museums in this shoreline neighborhood.

The Mary A. Whalen is a decommissioned oil tanker that activist Carolina Salguero has transformed into a museum and floating cultural center.

Waterway-centric nonprofit PortSide NewYork operates it. The tanker is easy to find — NYC Ferry built a dock right alongside it.

The other floating cultural institution is the Waterfront Museum, aka the Lehigh Valley Railroad Barge #79.

The red-painted wooden barge is about a century old. It’s tied up on the shoreline beside Fairway Supermarket, which is located in one of my favorite Red Hook buildings.

I cherish the neighborhood’s iconic storehouses that were built to handle goods transported on the Erie Canal. Fairway Market is located in the one called the Red Hook Stores.

To get from there to the Merchant Stores, you can walk along a waterside pathway that runs through the Pier 44 Waterfront Garden.

I love the energy of Van Brunt Street. Entrepreneurs there operate art galleries, a bookstore, delis, bars and restaurants such as Fort Defiance and a plant shop called Chelsea Garden Center.

Many merchants on this commercial corridor and elsewhere in Red Hook struggled after Superstorm Sandy but have since made a comeback.

Brooklyn Crab is built on stilts and therefore was largely spared the ravages of Sandy-related flooding.

I also cherish the aquatic scenery you can see during NYC Ferry rides in and out of Red Hook. Gantry cranes line the Brooklyn shore. The World Trade Center shimmers in the distance.

The ferry is the neighborhood’s most convenient form of public transportation. As everyone knows, the closest subway stop is far away and bus service is irritatingly infrequent.