Ask a historian: What happened to Brooklyn’s Native American tribes? 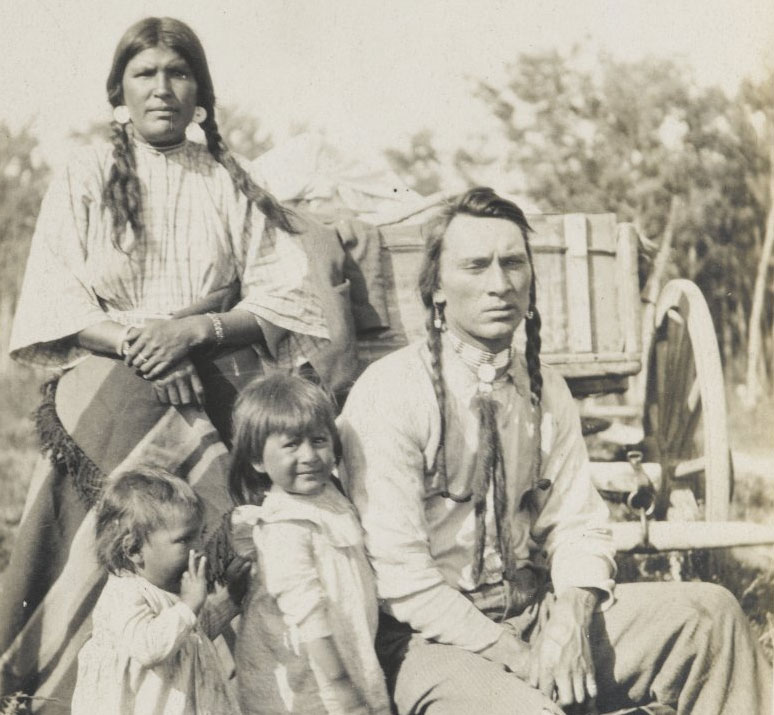 A Native American family poses for a portrait around 1900. Photo via Brooklyn Museum
Share this:

Good question. They left behind their names but no addresses.

Most succumbed to displacement with newcomers supplanting the original natives, often attacking their communities. In other instances, they sought greener pastures in new neighborhoods. In one occasion, they were cheated out of their land.

Canarsee was a Brooklyn tribe of Lenape, part of the Delaware Nation that lived in most of what became Kings and Queens counties. Their primary occupation was hunting and gathering with specialties in fur trading and fishing. The name Canarsee in the Algonkian or Lenni language means “fenced in community.”

Native Americans had settlements in Bushwick, Gravesend and Fort Hamilton (They called it Navack.). They named Brooklyn Heights “Ihpetonga” or “high sandy bank.” Sheepshead Bay became a source of wampum. Villages grew near Bridge Street and the Navy Yard and at Gallatin Place. A chieftain named Gauwane lived in Gowanus.

Trails used by Native Americans morphed into paths and sometimes roads such as Kings Highway in 1704. The Massapequas lived on Long Island and the Shinnecocks still own land outside Southampton and Brookhaven.

Many assimilated into the European community but most moved on once the neighborhood got crowded, escaping to Staten Island, New Jersey and Pennsylvania. Across the river, the Manhattans lived—and still do. When it was still New Amsterdam, the director, Willem Kieft, ordered attacks on the Native Americans in Kieft’s War, 1643-45. By 1800, most of the Canarsee tribe had been killed.

Gertrude Ryder Bennett, who lived in her family’s 1766 landmarked Wykoff-Bennett Homestead on Kings Highway and East 22 Street, wrote a biography in 1982, titled Turning Back the Clock in Gravesend. She remembered a Thanksgiving visit as a young girl to one of the last living members of the Canarsee tribe, Old Saar, a woman “over a hundred.” She describes passing through the Sheepshead Bay settlement and the village of Canarsie. Old Saar’s house was a shack with a dirt floor. Very impressed with her spartan poverty, Ryder Bennett observed that Old Saar’s son, in his eighties, was chopping wood and digging for clams. “When we left, she stood at the door waving, the corn-cob pipe in her other hand, the wind tugging her thin wrapper.”

Native Americans from the Kahnawake and Akwesasne Mohawk reservation in Quebec, Canada, immigrated to Brooklyn in the 1920s. Their skill was construction work on skyscrapers and bridges. Arriving in Boerum Hill, they lived in rooming houses but traveled back to their Canadian reservation on weekends. The Wigwam, a local bar on Nevins Street, as well as the Spar Bar, became meeting places. According to The New York Times, Joseph Mitchell wrote about the community in 1949 for The New Yorker in “The Mohawks in High Steel.” But the neighborhood changed in the 1960s and the Native Americans moved out as gentrification took over.

In Pennsylvania, the infamous Walking Treaty of 1737 proves how the early settlers stole 1.2 million acres from the Lenape Delaware Native Americans. Heirs of William Penn, the founder of Pennsylvania, claimed a questionable deed in which the Lenape Delaware proposed to sell a tract of land as far as a man could walk in a day and a half. Lenape leaders assumed the distance would be about 40 miles.

Three of the fastest runners in the Penn community were hired for the “walk” on September 19, 1737; only one man finished 70 miles, roughly the size of Rhode Island. The Native Americans had to move from their homes and lands.

In 2004, the Delaware Nation filed suit against the Commonwealth of Pennsylvania, contending that the original agreement intended a “leisurely walk,” not a run. Later experts concluded that the deed was a forgery but the court denied the claim of the Delawares. The U.S. Supreme Court declined to hear the case.

There’s a term for that kind of shady dealing, but it’s not a particularly nice one.