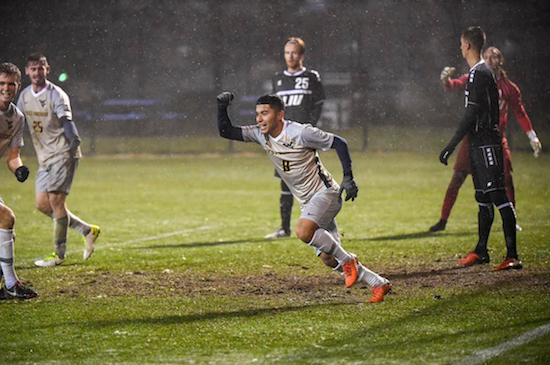 Jorge Quintanilla celebrates after scoring the go-ahead goal in West Virginia’s 4-2 victory over LIU-Brooklyn last Thursday in the opening round of the NCAA Tournament in Morgantown, West Virginia. Photo courtesy of Dale Sparks, WVU Athletics Communications
Share this:

LIU-Brooklyn head men’s soccer coach TJ Kostecky was convinced his team would “make some noise” in the NCAA Tournament.

The Blackbirds certainly did just that, running out to an early two-goal lead in Thursday’s opening-round match at No. 18 West Virginia before having their magical season come to an all-too-abrupt end in an eventual 4-2 loss to the Mountaineers at Dick Dlesk Stadium in Morganton.

Buoyed by reigning Northeast Conference Player of the Year Rasmus Hansen’s two goals in the first nine minutes, the Blackbirds (13-6-1) appeared on the verge of the greatest victory in the history of the program.

But the Mountaineers (14-6) came storming right back on the strength of two goals off corner kicks, one following a controversial offside call, which LIU thought was missed, and the final tally via a free kick.

“It was a challenging way to lose a game, to go up 2-0 and feel a little confident and then give up goals on corner kicks, which is something that we have not done this year,” Kostecky lamented.

“So, it’s a bit challenging to be sitting here and know we could have done better than that. But West Virginia fought really hard. I give them credit.”

Hansen, who got the Blackbirds off to a breathtaking start by sludging through the slushy conditions to beat West Virginia netminder Steven Tekesky in the third minute, capped his career at the Downtown Brooklyn school by making it 2-0 at the 8:55 mark off a feed from fellow senior Filip Nordstrom.

That advantage held up until Lucas Logan converted Aibert Andres-Lop’s corner-kick feed with a header past LIU freshman goalkeeper and Midwood High School alum Sam Ilin to cut the lead in half.

The Mountaineers knotted the score at 2-2 in the 35th minute as Tsubasa Takada apparently remained onside long enough to slip one past Ilin for the equalizer.

Jorge Quintanilla and Joey Piatczyc added second-half tallies for West Virginia, which spoiled LIU’s hopes of advancing past the first round for the first time ever and continuing their final season here in our fair borough.

“At the end of the day, soccer is about individual battles,” Kostecky noted. “Ultimately, the team that wins most of those battles is going to come out ahead. And I think you saw that today; that’s what happened on those corner kicks. They out-battled us and they won those balls.”

LIU announced last month that nearly all of the school’s Division I teams would be playing their regular-season games on the LIU-Post campus in Brookville, N.Y., beginning next year.

“It’s been a remarkable season,” Kostecky said in the aftermath of his 20th campaign at the forefront of this program.

“We had a nine-game winning streak at one point. The university is going through some changes right now that we found out about in the middle of the season and the guys stuck together and believed in each other.”

That belief guided LIU past reigning two-time NEC champion St. Francis Brooklyn in a key overtime win back in September and launched the Blackbirds over both Fairleigh Dickinson and Bryant in the final two games played at LIU Field during the NEC Championships.

However, Kostecky’s crew finally found an opponent it couldn’t overcome as the Mountaineers rallied through adverse conditions and a game Blackbirds unit to pull out the win.

“We were playing well when we went down 2-0,” West Virginia head coach Marlon LeBlanc noted three days before his team got eliminated by 13th-ranked Georgetown in the second round Sunday in Washington, D.C.

The Blackbirds leave Brooklyn with four NEC titles in all, including three during Kostecky’s two-decade tenure here.

More importantly, the team left a strong final impression with the local community and its long-time head coach, who is eager to continue guiding this program in its new location.

“Oftentimes, we talk about family, how teams are families,” Kostecky said. “Some are dysfunctional families, and some are healthy families. Well, this was the healthiest family I’ve ever coached in 20 years.”