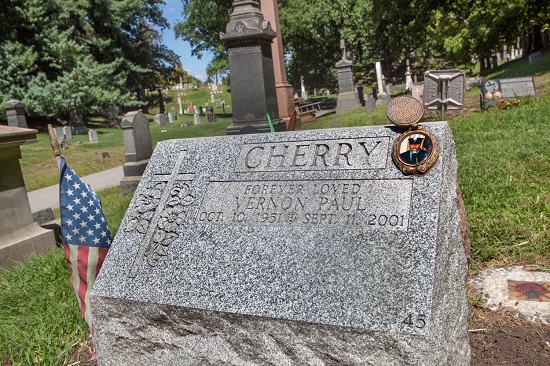 This firefighter lost his life trying to save others on Sept. 11, 2001. Eagle photos by Robin Michals
Share this:

Like Basquiat, the famed painter and Brooklynite, who died at the tender age of 27, thousands of others were also taken from this earth far too early exactly 17 years ago.

Sept. 11, 2001 remains a bleak date in American history, but Green-Wood was able to offer solace to dozens of families who chose to bury and remember their loved ones at the landmarked cemetery in the aftermath of the terrorist attacks.

From those who worked inside the Twin Towers, to the hundreds of first responders who perished while trying to save others, each and every victim is immortalized in New York City history.

“Since the attacks on the World Trade Center … 79 individuals who were killed that day have been interred, cremated or memorialized at The Green-Wood Cemetery,” Richard J. Moylan, president of Green-Wood, told the Brooklyn Eagle.

“These sacred gravesites and memorials are scattered throughout Green-Wood’s 478 acres. To mark the anniversary of this dark day in American history and to ensure that who lost their lives are always remembered, every visitor to Green-Wood on the anniversary of Sept. 11 receives a single-stem flower.”

In addition to a flower, each guest of Green-Wood today will also receive an American flag to honor those who passed away.

When Eagle photographer Robin Michals was touring the cemetery this past weekend, a civil engineer at Green-Wood provided some insight regarding the graves of 9/11 victims and how the cemetery prepared for an influx of burials.

The engineer said the cemetery expected to receive 300 to 400 new burials after 9/11, but because so few remains were found in the wreckage, significantly less graves were taken out.

Though 79 plots exist at the cemetery, the engineer said some of the gravesites only contain personal effects and not the actual remains of victims. In addition, some headstones were taken out and the bodies were buried later when they were discovered.

In addition to receiving a flower and an American flag, visitors of Green-Wood today can also take part in its monthly series: Death Cafe. Created in 2011 by British entrepreneur Jon Underwood, “The Death Cafe is inspired by the centuries-old European salon (or cafe), an informal gathering to discuss philosophical, political or scientific ideas,” according to Green-Wood’s website. The event “increase[s] awareness of death with a view to helping people make the most of their lives.”

“At each Death Cafe, participants share their deepest thoughts in a space where we can all feel comfortable,” Cunningham told the Eagle.

“Tonight, in special commemoration of September 11th, I will open and close our discussion by reading two poems that I hope will help us recall this anniversary in a way that honors those lost and celebrates their lives and legacies.”