When Damon McCoy, an assistant professor of computer science at NYU Tandon School of Engineering, heard from a friend that Facebook was about to publicize all its political-ad data, he was intrigued. With Facebook under increasing scrutiny for its role in reaching voters through targeted-ad campaigns, the move toward heightened transparency was unprecedented in the social-media industry.

“Everyone knows what happened in the election and the allegations against the Russians,” McCoy told The Bridge. “Obviously, Facebook was trying to react to them.”

Yet finding the searchable database Facebook built to display the information, which went live on May 24, required a strenuous search on McCoy’s part. And once he discovered the database, McCoy found it frustratingly minimalist for research purposes, not offering many options for compiling statistics.

The Facebook feature was a long way from helping citizens and researchers answer the big questions of the day, notably: Who’s doing the most political advertising on the dominant social network? So McCoy recruited two colleagues from the NYU community to help shape the Facebook data into a much more comprehensive picture.

When they announced their study in July, the results made headlines from the New York Times to Fortune to Mashable and beyond. Their research revealed that the Make America Great Again Committee, the Donald Trump-GOP joint fundraising team, spent $190,400 during the three-week research period, amounting to 26.4 million “impressions” among Facebook users. (Planned Parenthood was No. 2, spending $188,800.) The NYU team pledged to keep updating the information weekly through the November election.

McCoy’s initial goal, to scrape Facebook’s own data and find enlightening patterns within it, presented a challenge. The Facebook archive showed scaled-down versions of individual ads, along with an indicator of who sponsored the post and where on Facebook it appeared. Many of the ads appeared identical, though, and the measurements of how much was spent on them and the number of impressions made were reported in imprecise figures. But the data had potential, including information on the viewers’ ages, gender, and geographical locations.

McCoy, 41, realized he would need a team to put it all together. Enter Shikhar Sakhuja, 21, from New Delhi, India, who studied network security last semester under McCoy’s tutelage, and Laura Edelson, 37, from the New York City area, who’s pursuing a PhD at Tandon. McCoy asked them for help sorting through the Facebook archive’s copious volume of information.

“If we really want[ed] to understand and make transparent Facebook political advertising,” McCoy said, “[I figured] we’re probably going to need to extract the ads, the demographics and all the information from Facebook’s platform and get it into a database to start generating statistics.”

The team constructed a list of searches they hoped would prove resourceful, including names of every U.S. elected official in federal office and hot-button political topics, like immigration and taxes. “We wanted to get this data released as quickly as possible, because every day this data changes,” Edelson told The Bridge. The researchers had to return to the archive again and again, looking for specific ads to note any additions to their already logged numbers.

Among the patterns that emerged, they saw that the bulk of advertisers buy a series of similar ads for small amounts of money, presumably with different targeted audiences–males between the age of 35 and 44 who live in New Mexico, for example.

“We kind of suspected that Trump was a major advertiser, so it wasn’t too shocking,” McCoy said. “But it was kind of neat to be able to say, ‘O.K., here are some real numbers as to his online advertising spending.’” Because of the broad readings available about the impressions and money spent, “All the numbers we published are minimums,” Edelson said, “and they’re very, very conservative minimums.” 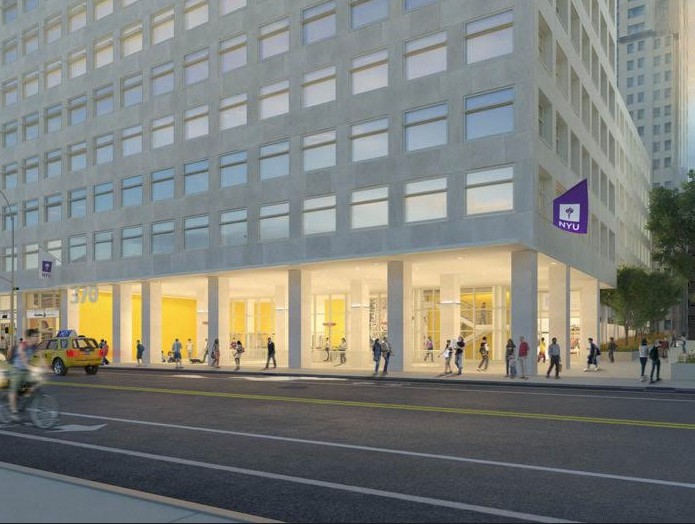 “It is great to see the enthusiasm from journalists in reaction to our initial report,” McCoy said. “It is even better to work with reporters that are starting to investigate the growing trend of online political advertising on their own and integrating it into their articles.”

The project’s success was another step in the rising profile of the Brooklyn-based engineering school, which has been expanding its programs in the fields of cybersecurity, wireless communications and other tech fields.

McCoy added he was also pleased that a Facebook representative told the Times that “the report is exactly how” the company hoped the political ad data site would be used, and that the information “brings more transparency to the messages people see and increases accountability and responsibility over time, not just for us but advertisers as well.”

As the NYU team’s study continues, they’re looking to tell a bigger story, one about the financial dynamics behind modern political campaigning as a whole, and awareness about what the public sees on social media. In the eyes of the Tandon researchers, what was more compelling than Trump’s heavy financing of Facebook ads was that the sources of many political ads–backing various individuals and causes–were challenging to decipher.

“A lot of these records that we find, they’re linked to something–a Facebook page that has a URL of the organization,” Edelson said. “But the ad sponsors are actually just text labels; there’s no way to trace that ad sponsor to an organization.” Some of the labels are acronyms, often obscure, and others have multiple organizations cited as sources, requiring additional web research to identify them.

The relative lack of transparency could serve to undermine laws banning 501(c)(3) nonprofit groups from political campaigning. Though Facebook implemented a vetting process in the wake of the Russia scandal that requires political ad buyers to prove that they’re U.S. citizens, Edelson noted, “At an absolute minimum, it’s easy for that individual to obscure who they are and who is spending the money.”

The NYU researchers said other platforms like Google and Twitter do not plainly offer such archived data, and lauded Facebook for its initial steps. Still, McCoy said he would like to see enhanced transparency, especially when it comes to information about the sponsors, who is being targeted by the ads, and how people interact with them by clicking on the links, sharing the posts, or leaving comments.

Facebook has recently posted messages on company’s “Newsroom” page about actions the network is taking in its commitment to greater transparency. Last week, Facebook launched an Application Programming Interface — or API — to help citizens more easily interact with its ad data. McCoy told The Bridge that the API is in a beta stage right now, and he and his team haven’t gleaned much information from it yet. Said a Facebook representative in a statement: “We’re making advertising more transparent to help prevent abuse on Facebook, especially during elections.”

But evidently that effort will benefit from outside help like the NYU team. “It took a group that was very technically adept … and knew how to do data analysis,” said McCoy. “We look forward to updating this every week,” said his student, Sakhuja, “and to uncovering deeper truths.”