In time for L-train shutdown Citi Bike expects to begin installing the additional docks in the next couple of weeks. Photo: Mary Frost/Brooklyn Eagle

Brooklyn Borough President Eric Adams and Trottenberg were among those taking the ride to the Bedford-Stuyvesant Restoration Corporation on Fulton Street to make the announcement.

“Too many people of color and low-income residents walk past healthy alternatives because they think it’s not for them,” Adams, a former diabetes sufferer who turned his health around through diet and exercise, said in a release.

Assemblymember Walter Mosley (D-Clinton Hill, Bedford-Stuyvesant) said he was thrilled with the low-cost memberships. “The change in the program will allow low-income families to live and enjoy a healthier lifestyle.”

Citi Bike docks are scattered throughout Brooklyn, Queens and Manhattan. SNAP recipients will be also be able to use a new form of bike share in Coney Island, where Citi Bike plans to begin a pilot of dockless bikes later this year.

Citi Bike Perks Not Just for the Disadvantaged

Low-income residents aren’t the only New Yorker to get a break when renting Citi Bikes.

Groups like the Billion Oyster Project, Art for Film and Bre & Co., headquartered at the Brooklyn Navy Yard, can get an even lower rate — $49 a year. And some organizations, such as Interfaith Medical Center, Pratt Area Community Council and Cockroach Labs (a technology company) subsidize memberships for their employees, who get to ride for free.

Riders still have to mind how long they ride any one bike. Regardless of the cost of the membership, trips longer than 45 minutes cost $2.50 for each additional minute.

The new SNAP discount program was presented by Healthfirst, the largest not-for-profit health insurance plan in New York City. To apply for this discount, SNAP recipients should visit the Citi Bike website at citibikenyc.com and enter their EBT card number or NYCHA tenant ID. 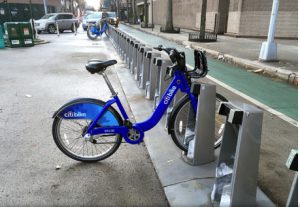