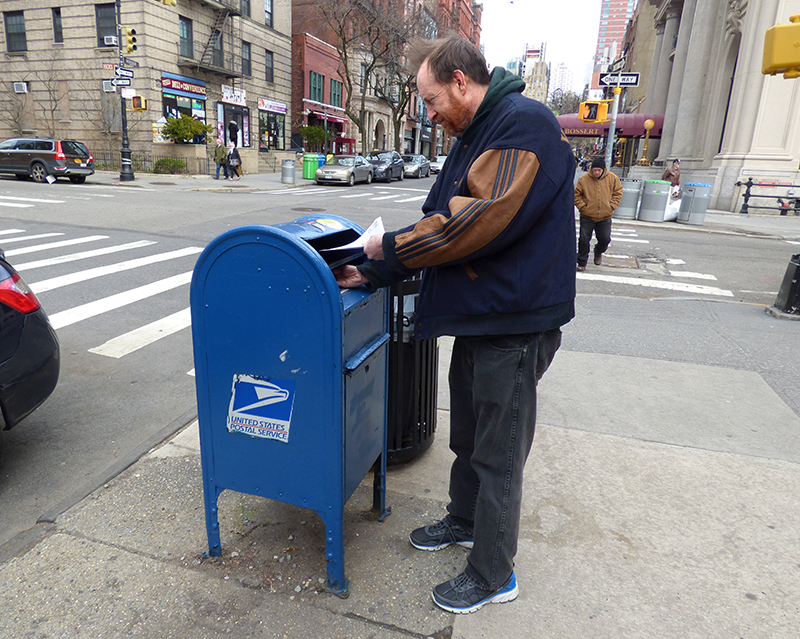 William Balardelle mails a letter in the USPS collection box at the corner of Montague and Henry streets in Brooklyn Heights. That’s one of several mailboxes in the neighborhood that have recently been targeted by thieves in a scam called mailbox fishing. Photo by Mary Frost
Share this:

Think twice before dropping your mail into the corner mailbox.

An old trick called mailbox fishing is back, and thieves have been making off with checks, money orders and credit card accounts stolen from mailboxes around the city, including Brooklyn Heights.

Usually operating late at night, the crooks tie an object (sometimes a bottle) coated with rat trap glue to a string and slide it inside the mailbox. Then they pull it out and collect what they’ve snagged.

Brooklyn real estate broker Kevin Carberry was recently caught up in the scam.

It was “kind of strange,” he told the Brooklyn Eagle.

After Carberry dropped his monthly payments for his health insurance, mortgage and a couple of other bills into a mailbox (officially called a collection box by the USPS), he got a phone call from TD Bank.

“A woman asked if I had issued checks. Then she asked if I knew [someone else]. I told her no. It turns out that TD bank had submitted these checks to my bank, Chase. They had been third-party endorsed.”

The same person had endorsed Carberry’s checks to Carberry’s business photographer and his health insurance company.

“It sounds like someone stole my mail and submitted it to TD Bank,” Carberry said.

Adding insult to injury, when Carberry went to USPS to complain, “They acted like they couldn’t care less,” he said. USPS issued a complaint number and then told him not to call back.

“I got a feeling they’re going to do nothing,” he said. (The Eagle has reached out to USPS but has not yet received a response.)

Carberry says when he called the 84th Precinct, he was told the police couldn’t do anything because, since his bank didn’t accept the checks, there was no loss.

But Carberry worries about stolen checks slipping under the radar of the bank the next time around. If a bank accepts a fraudulent check, an involved procedure must be carried out before the victim can obtain a refund.

“One of the checks was for about $5,000. If it happened to someone else, their financial boat could be tipped,” he said.

Thieves Use Chemicals to Erase Names and Amounts

Another Brooklyn Heights resident who wishes to remain anonymous, told the Eagle that she had a similar experience in October — and she only discovered it because she routinely checks her bank statements online.

She said that she deposited her mail in the USPS box at the corner of Montague and Hicks streets. While she can’t be 100 percent sure that’s where the thief got his or her hands on her checks, that mailbox has been hit numerous times, along with another box on Joralemon Street and one on Court Street near Montague.

Someone used a chemical such as acetone to erase the name she had made the check out to and the amount of the check, and wrote in the name of another woman. (This process is known as “check washing.) They made the check out for $220 — an amount she feels was designed to be inconspicuous.

“I contacted the fraud department at the bank. They closed the account immediately,” she said.

She recommended that people check their bank statements regularly and, if a check is stolen, close their account.

“It was a big pain in the neck, to be honest,” she said. “But they have your banking account number.”

The Brooklyn Heights Association (BHA) was informed by the 84th Precinct about the rash of mailbox thefts earlier this year, and learned it has continued unabated over the past few months, BHA Executive Director Peter Bray told the Eagle.

Bray says he was recently asked by Neighborhood Coordination Officer John Condon to send an alert to the community. The alert includes this advice:

Condon and fellow Neighborhood Coordination Officer Donovan Hunt, along with other officers from the 84th Precinct and an inspector from USPS, informed residents of the uptick in mailbox fishing theft at recent Build the Block and 84th Precinct Community Council meetings.

Stickers have been placed on mailboxes warning patrons to avoid dropping mail into the box after the daily pickup and on weekends, when the mail is an easy target for a nighttime thief. USPS has retrofitted collection boxes in certain high-crime areas, such as the Bronx, Inwood, Washington Heights and Harlem, but doing so is expensive and time consuming.

In February, U.S. Rep. Grace Meng (D-Queens) sent a letter to Elvin Mercado, Triboro District Manager of USPS, urging the Post Office to replace all collection boxes in Queens with new anti-theft boxes in order to combat mailbox fishing. Anti-theft collection boxes have smaller slots. One such box is located on the corner of 78th Street and Fifth Avenue in Bay Ridge.

“Many of the victims of mail fishing are seniors who are particularly vulnerable to these reprehensible schemes and have no means of protecting themselves. USPS must act at once to stop this unconscionable crime,” she wrote.

She added, “Mail fishing has become so prevalent that local police precincts have suggested that residents bring their mail directly to the post office and not leave it in local USPS collection boxes. This is not an acceptable solution.”

When asked if frequently targeted collection boxes would be surveilled to catch mailbox fishers in the act, a source told the Eagle that the NYPD is working with USPS, and there will be more units involved going forward.