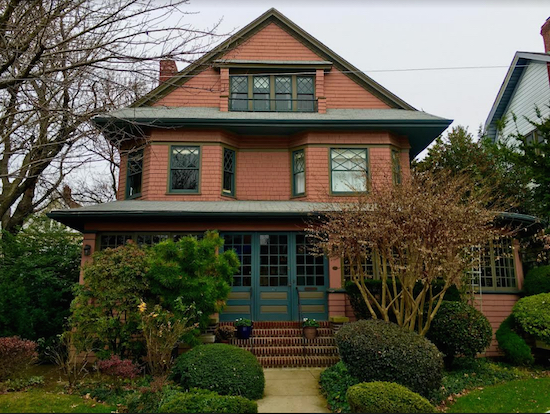 Homes in the Prospect Park South Historic District, including this one at 85 Argyle Road, are selling for a pretty penny. Eagle photos by Lore Croghan
Share this:

The house with the cherry tree sold for nearly $3 million.

Victorian Flatbush houses are going for a pretty penny these days.

The better their condition, the higher their price.

And preservation-conscious buyers are particularly pleased when they find homes for purchase that are located within the area’s historic districts. This protected landmark status reduces the chances of houses next door to theirs being demolished and replaced with mammoth McMansions.

The other day, we strolled around the Prospect Park South Historic District for a peek at a half-dozen houses that have changed hands in recent months.

* First, a word about that cherry tree. It stands on the lawn of 85 Argyle Road.

According to an online posting by listing agent Rebekah Carver of Brooklyn Hearth Realty, the tree is more than a century old.

The sellers had purchased it for $1.395 million in 2005, Finance Department records show.

According to an online posting by listing agent Jonathan Mellon of Stribling & Associates, it has 10 bedrooms.

The house was designed in 1900 by John J. Petit, a prolific architect whose work was crucial to the development of Prospect Park South and Ditmas Park.

The designation report about the Prospect Park South Historic District says the original owner of the house was Eugene W. Harter, who was the head of the Greek Department at Erasmus Hall High School.

Just imagine. Back in those days, this Flatbush public high school had an entire department devoted to the study of classical Greek.

The Prospect Park South Historic District designation report calls the house’s 1906 design by George Showers “eclectic” and describes it as “an unusually varied combination of stylistic motifs, ranging from Medieval crenellation to Dutch Colonial gambrel roofs and a Classical portico.” A koi pond in the back yard

* There’s a koi pond in the back yard at 916 Albemarle Road. You can’t see it from the sidewalk, but it’s mentioned in a posting about the property by listing agents Ryan Serhant and Rachel Simons of Nest Seekers International.

It was one of five frame houses on the Albemarle Road block between Coney Island Avenue and Stratford Road that architect Benjamin Driesler designed in 1909 for Emma Newman, the Prospect Park South Historic District designation report says. A group of four people bought the house for $2.09 million, Finance Department records indicate. The purchasers were spouses Ernest M. Hanna and Barbara F. Hanna, who own a 57.74 percent stake in the property, and spouses Charlotte Hanna and William Zafiros, who own a 42.26 percent stake, the records show.

An online listing by Carolyn Cedar of Douglas Elliman says the house has five bedrooms.

The historic-district designation report cites a 1908 publication, Flatbush of To-Day, which calls 162 Argyle Road “one of the most perfect examples of the Dutch style to be found in Flatbush.”

It was designed by Manhattan architect Hobart A. Walker and built in 1907. According to an online listing by Mary Goodson of Halstead, it’s a legal two-family house.

The historic-district designation report describes it as a Colonial Revival-style house that architect George Showers designed in 1908 for George T. Moore.