Law Clerk Inga O’Neale (center) was honored as the Employee of the Year during a ceremony in June. Pictured from left is retired Justice Randolph Jackson, Inga O’Neale and Hon. Larry D. Martin standing in front of a plaque for the late Justice Nicholas Coffinas. Photos by Rod Randall
Share this:

Inga O’Neale, a principal law clerk at the Kings County Supreme Court, was named the Court Employee of the Year during a ceremony at 360 Adams St. last month.

“Inga is an excellent writer, having served in the Law Department and the Appellate Division,” said Justice Larry D. Martin, whom O’Neale clerked for since 2010. “She has a trait which all good principal law clerks possess. That being able to prevent a judge from making a reversible error. In Inga’s case, she is able to reign me in by way of non-verbal communication. She may widen her eyes or inhale deeply before offering a contrary opinion on an issue.” 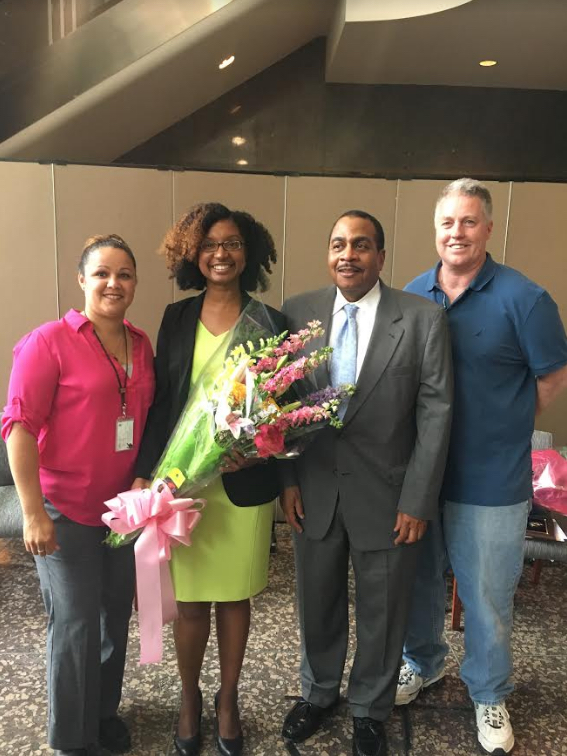 She started her career in the courts with the Law Department that summer. In 2004, she began clerking for Judge Nicholas Coffinas, which she did for two years until he died. She then went back to the law department for another two years before she started working with Judge Randolph Jackson in January 2008. She worked with Jackson until November 2010, when she began working for Justice Larry D. Martin, whom she still works with today.

Along the way, O’Neale gained notoriety in the courts when she became president of the Association of Law Secretaries of the Justices of the Supreme and Surrogate’s courts. The organization honored her as a past president in April 2016.

O’Neale said it was a thrill to be honored by her courthouse family.

“I’ve worked with different departments and different people and I have loved working in all of them because I was always exposed to something new,” O’Neale said. “That combined with the good people who work here really makes me love my job.

“I have to thank everyone that I’ve ever worked with here. It doesn’t matter their title, they’ve all taught me something different. It is really like a big family here, everybody knows everyone and it’s very close-knit.”