Jackie Robinson. Mae West. Piet Mondrian. A War of 1812 veteran who lived until 1905.
Four VIPs from very different milieus share the same eternal resting place — Cypress Hills Cemetery.
The picturesque graveyard, which was founded in 1848, occupies a 225-acre swath of terrain that stretches across both sides of the Brooklyn-Queens border.

It gets less media attention than high-profile Brooklyn boneyard Green-Wood. But Cypress Hills Cemetery is nevertheless an inspirational place to visit. Baseball fans, history buffs and Brooklynites who want to know their borough well should make the trek as soon as spring foliage arrives.
To refresh your memory if you haven’t recently visited the scenic cemetery, take the A or C train to Broadway Junction, then switch to the J train. The Cypress Hills J train station is just steps away from the cemetery’s front entrance at 833 Jamaica Ave.
By the way, the entrance has an eye-catching archway topped by a distinctive roof. It is a beautiful replica of the original entrance, which had been built in 1893.

The replica was constructed some years ago as part of a successful effort by Cypress Hills Cemetery’s management to get the historic cemetery into good shape. Cypress Hills Cemetery is situated on traffic-heavy Jamaica Avenue. Yet it looks like a steep-hilled park with ancient trees, and grassy lawns — which are studded with gravestones old and new, touching memorial statues and stately family tombs.

Though today Cypress Hills Cemetery is surrounded by urban neighborhoods, it is referred to as a “rural cemetery.” 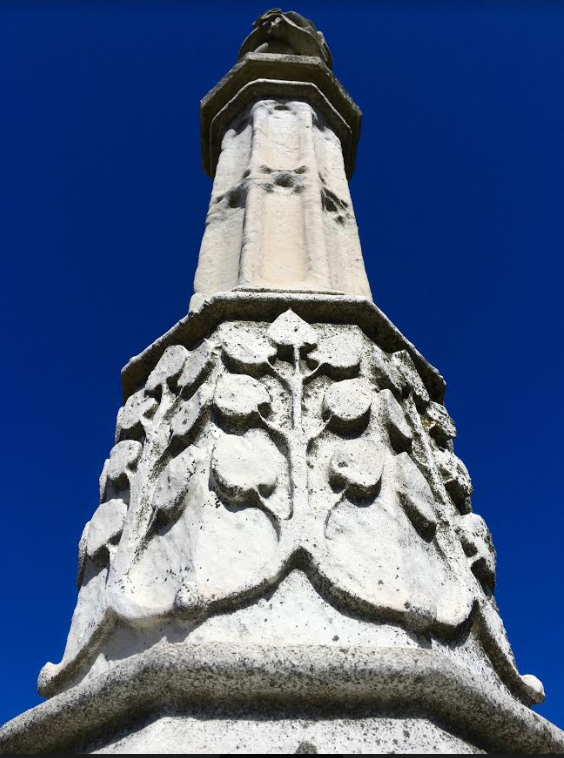 Its acreage was indeed rural when the cemetery was created. But there’s more to the name “rural cemetery” than that.
Cypress Hills was founded when the rural cemetery movement was just taking hold in America.
This pre-Civil War movement promoted the creation of cemeteries in the countryside, on vast tracts of scenic terrain, as an antidote to overcrowded urban graveyards.
Until the 1830s, in the United States the dead were buried in town, in church graveyards — which sometimes suffered alarming calamities such as floods that washed coffins and human remains right out of the ground.

In a 2011 interview published in The Atlantic, Keith Eggener, who had just written a book called  “Cemeteries,” explained that rural cemeteries were designed as places where visitors could step away from worldly concerns.
“Cemeteries we built for ourselves, increasingly after 1830, were places with winding roads and picturesque vistas,” he told interviewer Rebecca Greenfield.
“The idea being that you leave behind the mercantile world outside the gates and enter into the space where you can meditate, where you can come into contact with spirituality and concentrate.”
Also, because they were built before Americans had constructed parks, botanic gardens or art museums, rural cemeteries were also places where city-dwellers went for recreation such as picnics and carriage rides, Eggener said. Chinese-Americans’ tomb-sweeping ritualsToday, Cypress Hills Cemetery continues to be a green oasis in urban Brooklyn — and a fascinating place of religious diversity as well.
Numerous sections of the cemetery are filled with the graves of Chinese immigrants and their descendants. In late March and early April, their living relatives honor them by observing the Chinese Buddhist festival of Qing Ming, or Tomb-Sweeping Day.
The visitors bring gifts including flowers, sticks of incense and fake money to their loved ones’ graves. Some people leave the fake money, held in place by rocks, on top of their dearly departed’s gravestones. Others burn the paper money and paper replicas of useful things such as clothes and iPods in metal containers as offerings to the dead. Some visitors eat lunch at the gravesides. Roast pig is one customary delicacy that is served.
Many families make their Qing Ming visits to Cypress Hills Cemetery — and to the Evergreens, a nearby Brooklyn cemetery with a large number of Chinese-Americans’ graves — on weekends before or after the actual date of Qing Ming.
This year, it fell on April 4.
Non-sectarian Cypress Hills Cemetery is also the final resting place for Christians of various denominations and ethnicities including British and Welsh people who died far from home, and Jews. When you visit this historic cemetery, be sure to step inside the office near the front entrance and ask for a copy of the map of notable people’s graves. The map posted on the cemetery’s website does not show whose grave is where.

Having the right map will make it easy for you to find Brooklyn Dodgers superstar and civil rights advocate Jackie Robinson’s final resting place.

The famed baseball player, who broke Major League Baseball’s color barrier in the 1940s, died in 1972.

Robinson’s gravestone has an inspirational saying of his: “A life is not important except in the impact it has on other lives.” The day we went to pay our respects, tributes that other visitors had left beside his headstone included two baseball bats, a tidy pile of baseballs and a sleek pair of Nike athletic shoes.

Brooklyn-born movie star Mae West — a famed sex symbol who wrote nine of the 13 films in which she starred — lived in Hollywood at the time of her 1980 death. Her body was brought back home to be buried in the West family crypt, which is in a handsome old building called Cypress Hills Abbey.

Piet Mondrian, an important abstract painter, is buried on a gently sloping hill that has a view of midtown skyscrapers on the distant horizon.

The Dutch-born painter left Europe during World War II and came to New York to live. He died in 1944. As for the War of 1812 vet we mentioned at the start of this story, his name was Hiram Cronk. He was just 14 when he enlisted — and lived to be 105. At the time of his death, he was the last surviving veteran of that war.

Cronk’s grave is marked with both a headstone and a wonderful monument topped by an eagle.