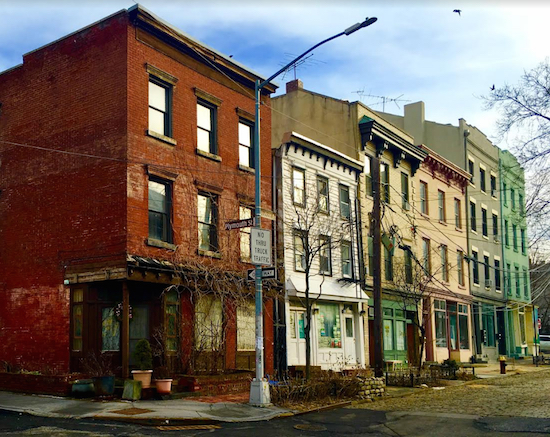 Welcome to lovely landmarked Vinegar Hill. These Greek Revival-style rowhouses are located (left to right) at 49 to 59 Hudson Ave. Eagle photos by Lore Croghan
Share this:

It’s a haven for history lovers.

Where else in Brooklyn can you find rowhouses built when U.S. Founding Father James Monroe was President and a gated mansion designed by the venerable architect Charles Bulfinch?

The answer is Vinegar Hill, a tiny neighborhood nestled alongside the Brooklyn Navy Yard and a mammoth waterfront Con Ed substation.

The other day, during a momentary respite from winter weather, we heard the call of its cobblestones and Greek Revival-style housing stock. We just had to go take a stroll.

Parts of the neighborhood look like the Land That Time Forgot — in a good way. Hudson Avenue has serious eye appeal. Even the towering smokestack at the end of this street adds to its charm.

Back in the day, it was called Jackson Avenue in honor of John Jackson, who owned a shipyard there.

According to the city Landmarks Preservation Commission’s 1997 designation report about the Vinegar Hill Historic District, three houses that are still standing were constructed by Jackson in 1817. The addresses of these three-story brick Greek-Revival rowhouses are 67, 69 and 71 Hudson Ave.

It was Jackson who named the neighborhood Vinegar Hill — in honor of the Battle of Vinegar Hill, fought in Ireland by the Irish against the British in 1798.

By the way, in early January, the city Buildings Department issued a permit for interior renovations at 70 Hudson Ave. to turn the two-family home and retail store into a single-family home and café. The new eatery’s name will be Café Gitane. The application for the construction permit was originally approved in 2008. According to city Finance Department records, 70 Hudson Ave. belongs to Dale Nichols, who bought it through an LLC for $999,000 in 2005.

An industrial building at 84 Hudson Ave. that’s outside the historic district has its own brand of old-fashioned charm. The name Boorum & Pease Company is on the facade. This manufacturer of business-stationery supplies, which is still in business today, had facilities in Brooklyn from the 1880s to the 1980s. Up the hill from Hudson Avenue, where Evans and Little streets dead-end, there’s a mansion with a room that’s shaped like the Oval Office at the White House.

This is the Commandant’s House, a Federal-style mansion designed by Charles Bulfinch and constructed in 1806. It’s an individual city landmark. Bulfinch was the architect of part of the U.S. Capitol Building.

The Vinegar Hill mansion served as the home of many Brooklyn Navy Yard commandants — including Commodore Matthew Perry. His brother, Oliver Hazard Perry, is the Naval hero who sent the famous 1813 dispatch saying, “We have met the enemy and they are ours.”

The U.S. Government sold the house for $120,000 in 1979, Finance Department records indicate. It now belongs to Charles Gilbert and Jennifer Jones.