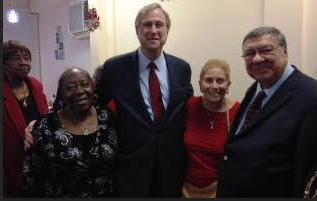 “What a wonderful time everyone had. We enjoyed good food and great company and it was a pleasure to speak with Chairman Cox and hear how enthusiastic he is about our work and the growth of the Brooklyn Republican Party,” Ferraro said.

This year marked a changing of the guard in Republican Party politics in Brooklyn. Eaton, a Bay Ridge lawyer who had served as Brooklyn GOP chairman for eight years, suddenly stepped down at the party’s Sept. 30 meeting and threw his support behind Ferraro, a retired educator from Bensonhurst. Ferraro was elected chairman by an overwhelming margin, 327-46. Eaton’s political enemy, state Sen. Marty Golden (R-C-Bay Ridge-Southwest Brooklyn), had sought to nominate Ted Ghorra a lawyer from Bay Ridge, for the chairmanship. But Golden’s forces lost a floor fight over proxy votes and Ferraro cruised to victory.