Rep. Shirley Chisholm, congresswoman from Brooklyn, is seen in this 1968 photo. AP Photo

When President Barack Obama awarded the Presidential Medal of Freedom posthumously to Rep. Shirley Chisholm last week, he was doing more than honoring the first African-American congresswoman. He was also honoring a vision that two leaders from Brooklyn shared.

Chisholm (1924-2005) was raised and educated in both her native Brooklyn and in her mother’s native Barbados. She attended Girls High School in Bedford-Stuyvesant, and pursued a career in education both before and after her life in public service. She served in Congress from 1968 to 1983, representing Brooklyn’s 12th Congressional District.

In 1972, Chisholm became both the first African-American woman to run for president. Her famed campaign slogan was “Unbought and Unbossed.”

But perhaps Chisholm is best known for her courage and humility in transforming an apparent obstacle into one of her greatest achievements. The two attributes are often paired because it takes great courage to listen to another leader’s approach to meeting a challenge.

That other leader was fellow Brooklynite Rabbi Menachem Mendel Schneerson, one of the founders of the Chabad-Lubavitch movement. Beginning in Crown Heights, Chabad has grown into a worldwide movement.

Author and scholar Joseph Telushkin unfolds the story of Schneerson, fondly known as “the rebbe,” and his meeting with the newly elected congresswoman in his 2014 book, “Rebbe: The Life and Teachings of Menachem M. Schneerson, the Most Influential Rabbi in Modern History.”

It’s a story of how the visionary rebbe helped Chisholm pioneer her congressional service and inspired her to establish the WIC nutrition program for needy mothers and children.

Chisholm found herself being relegated to a Congressional Agriculture Committee which, she felt, bore no connection to the needs of her urban constituents in Brooklyn’s Crown Heights neighborhood—which largely served black and Jewish citizens.

The rebbe asked Chisholm to visit him.  “What a blessing God has given you!” Schneerson said, according to both Telushkin’s book and Chisholm’s recollection at her 1983 retirement party. “This country has so much surplus food, and there are so many hungry people and you can use this gift God’s given you to feed hungry people. Find a creative way to do it.”

The opportunity soon arose for Chisholm, a Democrat, to work with Sen. Bob Dole (R-Kansas) to address the needs of farmers whose food surplus meant that they produced more than could be sold and who were taking a financial loss on their crops. Chisholm expanded the food stamp program to all jurisdictions through the 1973 Agriculture and Consumer Protection Act.

Telushkin also says, ‘Chisholm played an even more critical role in the creation of the Special Supplemental Nutritional Program for Women, Infants and Children (WIC), which mandated food supplements to high-risk, pregnant women and for young children at nutritional risk. Chisholm led the battle in the House; and Dole and Hubert Humphrey did so in the Senate.”

Last week, just before Thanksgiving, Obama led the award ceremony and acknowledged her role in creating the WIC program.

“When Shirley was assigned to the House Agricultural Committee — despite the fact that her district was from New York City, she said, “Apparently all they know here in Washington about Brooklyn is that a tree grew there,” Obama said. “But she made the most of her new role, helping to create the supplemental nutrition program that feeds poor mothers and their children.  Shirley Chisholm’s example transcends her life.” 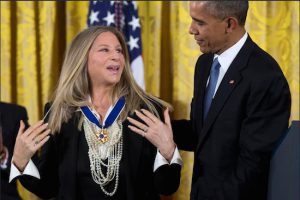