Iconic Brooklyn experience for only 65 cents On Tuesday, customers at Junior’s restaurant in Downtown Brooklyn got a fat slice of the world’s most famous cheesecake for 65 cents, to celebrate the storied eatery’s 65th anniversary. The line snaked from Flatbush Avenue Extension down DeKalb. Photo by Mary Frost
Share this:

What can you get for 65 cents nowadays?

On Tuesday, customers at Junior’s restaurant in Downtown Brooklyn got a fat slice of the world’s most famous cheesecake, to celebrate the storied eatery’s 65th anniversary.

Even before the restaurant opened at 6:30 a.m., the line for the sweet treat snaked from Flatbush Avenue Extension down DeKalb, past the former Dime Savings Bank, and customers said it was worth the wait.

“I love Junior’s cheesecake. I don’t mind standing on this line – I been out here about 45 minutes, and I don’t mind at all,” said Will McCleod, 28, a resident of East New York. “I love it. I come down here sometimes just for a piece.”

He showed some Brooklyn love for the historic restaurant. “I appreciate it, I’m thankful for them, honestly. Their cheesecake is the best.”

“I’m here to get cheesecake. I love cheesecake!” Charisma, age 9, told this reporter.

Her message for Junior’s? “You’re doing a good job. Keep up the good work.”

Fred Gardner, a resident of Brooklyn for 30 years, told the Brooklyn Eagle, “It’s a blessing that Junior’s been around that long. Let them continue staying here — the community supports you.”

For 65 years, Junior’s has ruled as the home of the quintessential cheesecake of New York City and the symbol of all that is good about Brooklyn.

Harry Rosen founded the restaurant on the corner of Flatbush Avenue Extension and DeKalb Avenue in 1950, and there it stays, despite a $45 million offer to third-generation owner Alan Rosen – which Rosen turned down.

“We’ve been in the same location for 65 years,” Rosen told the Eagle on Tuesday. “My grandfather opened here with my father Walter and my uncle Marvin on Election Day in 1950.”

The restaurant was smaller originally, Rosen said, but as they became more successful, they rented more space. Now they own the building, and Rosen has no plans to leave.

“Right now our plans are to sell cheesecake – a great comfort food – hopefully for another 65 years.”

Rosen has kids “but they’re too young” to decide if they’ll be joining the business, he said.

How it all got started

Rosen explained the origin of the world-famous recipe, which hasn’t changed since it was first concocted.

“My grandfather said originally that if we’re going to be a great restaurant in New York, we have to have great cheesecake,” he said.

Rosen’s grandfather would go out to places like the Brass Rail, buy a cheesecake and bring it back to the restaurant to study. Junior’s first baker, Eigel Petersen, carried out a series of experiments in search for the perfect formula.

“They’d say they like the crust of this one, the texture of that one, and soon enough they hit upon this formula, and it literally has not changed ever since,” Rosen said. “That’s the sponge cake on the bottom, and New York-style cheesecake – cream cheese, fresh eggs, sugar, heavy cream, a touch of vanilla. It’s pretty simple.”

New York-style plain and fresh strawberry are the top sellers, he said.

Is the cheesecake fattening?

“Yes,” he said. “But you know what? If you’re going to have a piece of cake you might as well eat the best.”

As this reporter stuffed her face with the delicious desert, Rosen kindly theorized it might be “a lot less caloric today, because it’s only 65 cents.” (Normally it’s $6.95 for one slice.)

Rosen said the restaurant has a staff of about 15 people up in the bake shop. “We also have a bakery in New Jersey. We have about 200 employees in this restaurant alone.” Besides the flagship Brooklyn location, there are two Junior’s restaurants in Manhattan — at Grand Central and at Times Square — and one at Foxwoods.

As employees and customers dropped by the table to say hello, Rosen explained why he was selling the precious slices for only 65 cents.

“It’s not just because it’s our anniversary. It’s really a thank you to our customers who have been coming here, some of them for longer than I’ve worked here. That’s what it’s all about,” he said.

“Certainly it’s not a profitable day — but it’s certainly a lot of fun. And what can you get for 65 cents these days?”

He added, “I’m just happy to be here, serving Brooklyites and New Yorkers for 65 years. We’re pretty proud of the tradition and the heritage and we’re grateful.”

Outside, customers waiting on line said they were grateful, too.

“I believe it’s great – 65 years, I didn’t know it was that long,” said Melanie Harris, who was born and raised in Brooklyn. Harris said the restaurant was part of her family’s history.

“We used to come here all the time with my mom — for Easter, Mother’s Day,” she reminisced. 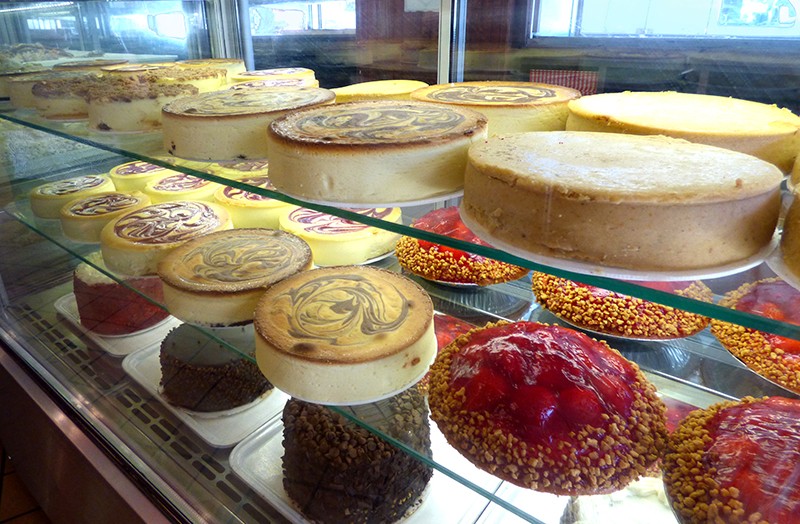 OPINION: Junior’s is not just cheesecake