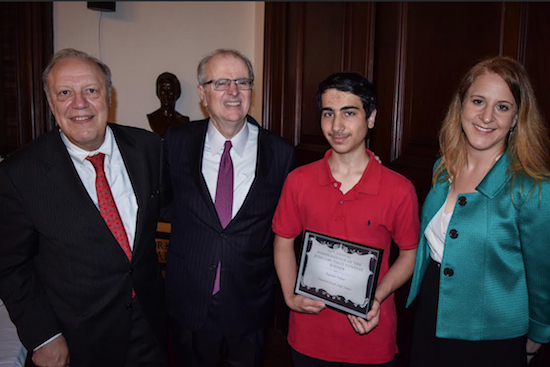 Sticking with the Law Day theme of the celebration of the 800th anniversary of the Magna Carta, students from all across the city wrote essays on why it is still relevant today.

“Since the inception of the U.S. Supreme Court, the Magna Carta has been cited 170 times in opinions which shows that even though it’s an ‘ancient document,’ it has an extraordinary impact,” Judge Miller said. “It established the concept that nobody is above the law.”

Benjamin Pulatov, from Townsend Harris High School in Queens, was named the winner. He will have his essay published in the New York Law Journal. All 10 of the finalists received a $100 gift certificate.

“I do believe that the Magna Carta is relevant today,” said New York state Chief Judge Jonathan Lippman. “It really is the foundation of the system of justice that we have. Equal justice. Nobody is above the law. Rich or poor, nobody is above the law, and that basic principle lives today in a very real way.”

Out of the 10 finalists, nine were from high schools in Queens and one was from a Manhattan high school. Judge Miller recognized this and joked that Brooklyn has to get more involved in the future.